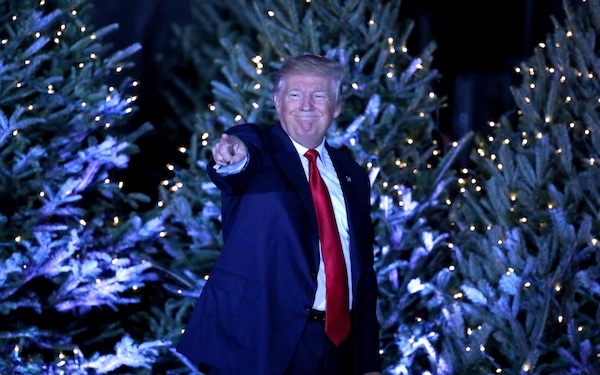 Donald Trump shook up long-standing international security norms Friday by reportedly suggesting a renewed arms race, a day after he tweeted that the United States should “greatly strengthen and expand” its nuclear weapons capability.

Trump’s meaning was sufficiently cryptic, perhaps deliberately so, that disarmament experts, foreign leaders and U.S. officials were left off balance — and unsure if he plans to upend U.S. policy on nuclear arms after he enters the White House in 28 days.

Since his election, Trump has rocked the foreign policy establishment by praising Russian President Vladimir Putin, and by speaking to the president of Taiwan and questioning the “One China” policy that only recognizes Beijing.

He also has challenged long-standing policy toward Israel, saying he will move the U.S. Embassy to Jerusalem, a disputed city, and naming an ambassador who supports Israeli settlements likely to block any resumption of the peace process.

But speaking recklessly about nuclear proliferation poses high risks in an unstable world, especially if it signals a possible end to decades of efforts and accords aimed at reducing the size and number of nuclear weapons.

On Friday, Russian President Vladimir Putin appeared to shrug off Trump’s tweet as “nothing new,” telling a news conference in Moscow that he would welcome a Trump invitation to visit the U.S.

China appeared more concerned. A foreign ministry spokesman said Beijing was “closely watching” the incoming administration’s nuclear policies, adding that the “country with the largest nuclear arsenal should assume a special and prior responsibility on nuclear disarmament.”

The numbers fluctuate, but Russia currently has about 400 more warheads, while the United States has 170 more delivery systems, according to the State Department Bureau of Arms Control, Verification and Compliance. Under the New START Treaty, both countries will deploy no more than 1,550 strategic weapons by February 2018.

Whatever his intention, Trump’s comments mark a severe shift in the tone and substance that Republican and Democratic presidents have used in the past when discussing nuclear weapons.

“It is a significant departure from what we have heard in the past,” said Hans Kristensen, a nuclear weapons expert at the Federation of American Scientists, a nonpartisan group that seeks to reduce the spread and power of nuclear weapons.

“None of them came out in this brazen way,” he added. “That means countries around the world are trying to figure out what is going on. Is it a madman or a new policy that they have to deal with? It creates uncertainty and suspicion both among allies and adversaries.”

The flap began Thursday after Putin was reported telling a defense ministry meeting in Moscow that Russia needs “to strengthen the military potential of strategic nuclear forces.”

Apparently in response, Trump tweeted that “the U.S. must greatly strengthen and expand its nuclear capability until such time as the world comes to its senses regarding nukes.”

The back-and-forth raised concerns that the two countries, which control 95 percent of the world’s nuclear weapons, might be resuming the destabilizing arms race that defined much of the Cold War.

On Friday, Trump acknowledged those fears in an off-camera conversation with the hosts of MSNBC’s “Morning Joe” talk show, which he reportedly watches regularly.

Mika Brzezinski, dressed in festive pajamas before a roaring fire, quoted Trump as saying: “Let it be an arms race because we will outmatch them at every pass and outlast them all.”

She didn’t say if Trump meant it as a joke or a threat. But as has become increasingly common, Trump’s aides rushed out statements trying to clarify what he meant, or at least may have meant.

In this case, they argued that Trump wasn’t calling for a new arms race, saying he wants to modernize the U.S. nuclear arsenal, a policy that President Obama has pursued.

“The real consequence of an arms race would be that the sides would, at great expense, pile up lots more nuclear weapons … and gain nothing in terms of improved security,” said Steven Pifer, a former U.S. ambassador to Ukraine who now is a senior foreign policy fellow at the Brookings Institution think tank.

Trump may have been taking a page from President Ronald Reagan’s playbook: build up your weapons and then negotiate, said Joseph Cirincione, president of the Ploughshares Fund, a San Francisco-based organization that promotes nuclear non-proliferation.

“But it’s a crude application,” Cirincione said. “Trump doesn’t have the skill or the knowledge of the advisers that Reagan had around him. He is breaking with decades of policy, being unnecessarily provocative and causing other leaders to question his competence and the value of his word.”

In what appeared an effort to ease those concerns, Trump released a warm holiday greeting Friday afternoon that Putin had sent him. In it, the Russian leader said he hoped to “bring our level of collaboration on the international scene to a qualitatively new level.”

“A very nice letter from Vladimir Putin; his thoughts are so correct,” Trump in a statement. “I hope both sides are able to live up to these thoughts, and we do not have to travel an alternate path.”

By almost any reckoning, the U.S. has a qualitative advantage over potential adversaries with nuclear weapons that are more accurate, reliable, technically advanced and invulnerable to a first strike than any other nation.

Keeping them current is another question, however.

The Energy Department has estimated it must spend about $18 billion a year over the next 15 years to replace and upgrade aging warheads and bombs. Outside experts have said the cost could reach $1 trillion.

Concrete ceilings have crumbled and roofs leak in parts of the Y-12 national security complex in Oak Ridge, Tenn. A program to replace the key facility, a uranium foundry, was stopped after the projected cost reached between $12 billion and $19 billion. A lower-cost plan is moving slowly.