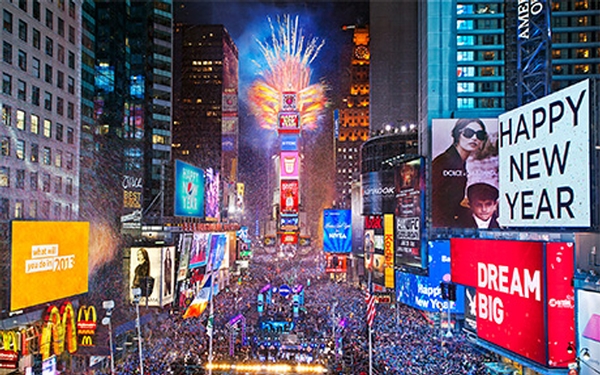 Toast the end of 2016 at a New Year's Eve party without breaking the bank.

Though there's an endless amount of NYE celebrations happening around the city, many of New York's parties don't come cheap, with ticket prices running three to four digits just for entry into exclusive clubs.

But fear not: These events are definitely in your budget, with entry fees of $50 or less.

So grab some bubbly and ring in 2017 without spending your whole paycheck.

This Upper West Side bar is offering a cover-free NYE party, complete with party hats and noisemakers. Say goodbye to 2016 with DJ music, karaoke and a complimentary toast at midnight. (511 Amsterdam Ave., Manhattan, 8 p.m. to 4 a.m., free entry, e-barnyc.com)

This Brooklyn beer hall will be serving up brunch during the day on New Year's Eve and offering dinner service in the evening. Sip on a free glass of Champagne at midnight while watching the ball drop on Black Forest's projector screen. (Black Forest Brooklyn, 733 Fulton St., Brooklyn, 10 a.m. to 2 a.m., free entry, blackforestbrooklyn.com)

This Meatpacking District music venue is holding a one-hour open bar at 9 p.m. before an evening of dancing to live DJ music. Attendees will also receive a glass of Champagne at midnight while they watch the live stream of the Times Square ball drop. (63 Gansevoort St., Manhattan, 9 p.m. to 4 a.m., $30, nyepartylist.com)

Bushwick event space Silent Barn is hosting "an apocalyptic kind of hopeful" party to ring in the new year, according to the event page. Festivities will include art installations as well as live music and DJs. Performers include Reagan Holiday, Bluntfang, Mighthaunt and more. (603 Bushwick Ave., Brooklyn, $10 to $15, facebook.com/events)

The Queens art and performance space is hosting some of its favorite DJs and performers. See sets from Juliana Huxtable, pictured, Le1f, Katie Got Bandz and more. (52-19 Flushing Ave., Queens, 10 p.m., $25 to $30, knockdown.center/event)

Prince NYE party at The Bodega

Bushwick bar The Bodega is paying tribute to Prince at its '80s-themed NYE party. A screening of "Purple Rain" at 8:30 p.m., featuring a select open bar, will kick off the night. Better yet, attendees who dress like Prince, according to the event page, will drink for free. Music from the late artist and other hits from the decade will be played through the start of 2017. (24 St. Nicholas Ave., Brooklyn, 6 p.m. to 4 a.m., free entry, facebook.com/events)

This Bushwick bar is hosting a New Year's Eve party, where you can dance your way into 2017. Starr Bar will feature music from all-female band Cumbia, DJ Bembona and Austin Lebrón. Head to the bar before 10 p.m., and you'll snag yourself an additional free drink before the champagne toast at midnight. Proceeds from this NYE party benefit Mayday Space, which raises funds for social justice initiatives. (Starr Bar, 214 Starr St., Brooklyn, 9 p.m. to 4 a.m., $35 to $50, eventbrite.com)

The Kings Beer Hall is throwing an end-of-year party featuring, you guessed it, plenty of beer. Each ticket holder will receive a flight of five specialty beers, a pint and a choice of something from the menu. The beer hall will be airing the Times Square ball drop on TV and will be offering a Champagne toast at midnight. (84 Saint Marks Place, Brooklyn, 8 p.m.-4 a.m., $40 to $60, eventbrite.com)

Savoir Adore at The Knitting Factory

The Knitting Factory in Brooklyn is hosting pop-rock band Savoir Adore, with late-night performances from DJ Juan MacLean, Panama Wedding and more. Tickets to the show include a one-hour open bar, a Champagne toast at midnight and two rooms of music and dancing until 4 a.m. (361 Metropolitan Ave., Brooklyn, 8 p.m.-4 a.m., $50 to $250, bk.knittingfactory.com)

Brooklyn Bazaar, which is calling 2016 "quite possibly the worst year on record," is hosting a "F--- 2016!" New Year's party. Featuring music and DJ performances from Titus Andronicus, Michael T and more, this event will have you dancing away the rest of the year on the bazaar's dance floor -- or in the ball pit. Before enjoying a complimentary Champagne toast at midnight, write down your worst moment of 2016, and shred it into what will become the party's 2017 celebratory confetti. (150 Greenpoint Ave., Brooklyn, 9 p.m.-4 a.m., $40 to $80, eventbrite.com)

The Hotelier at Mercury Lounge

Spend the remainder of 2016 dancing the night away to live music at Mercury Lounge's New Year's Eve show. Rock band The Hotelier is headlining, with additional performances from Oso Oso and Born Without Bones. The music venue offers a full bar so you can enjoy a toast when the clock strikes midnight. (217 E. Houston St., Manhattan, 8 p.m.-1 a.m., $25, ticketfly.com)

Head to this Lower East Side heated outdoor beer garden, which is hosting NYE festivities throughout the day. Start your day with the holiday brunch from noon to 4 p.m., followed by the "pre-game" happy hour from 4 to 8 p.m. Evening festivities will include specials on craft beers, cocktails, hot drinks and more, as well as a Champagne toast at midnight. (7 Rivington St., Manhattan, 8 p.m.-2 a.m., free entry, facebook.com/events)

The Dives at The Bitter End

Local rock and power pop band The Dives will be putting on a New Year's Eve show at The Bitter End. Head to the Village for an evening of music, drinks and balloons to ring in 2017. (147 Bleecker St., Manhattan, 10:30 p.m., $10, facebook.com/events)

The Black Lips at Baby's All Right

Garage band The Black Lips are headlining this all-night music party at Williamsburg's Baby's All Right. Free Tito's vodka and Bayou rum drinks will be available from 8 to 10 p.m. while supplies last. The show also features performances from PMS & the Moodswings, Winstons and a DJ set from Chances With Wolves. (146 Broadway, Brooklyn, 8 p.m., $49.99, ticketfly.com)

For those continuing the party into Sunday, prepare to dance another night away with famous DJ Steve Aoki, who's throwing a Brooklyn warehouse party in a secret location to celebrate the New Year. G.T.A., Bad Royale and Mike Cach are also slated to perform. (Jan. 1, location TBA, 9 p.m., tickets from $39, areaevent.frontgatetickets.com)

Events
#CWABG's "How Are We Curators of the Black American Experience Now?" on 3/25 at 7PM
303 views

Events
The Music Center & Grand Park Celebrate The Joys of the Season with Numerous Events This December
1,191 views