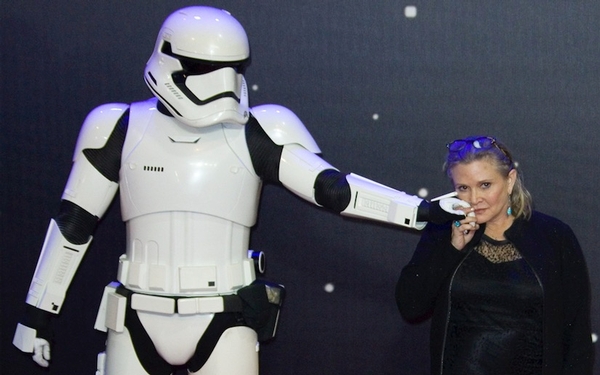 Actress and writer Carrie Fisher, who rose to global fame as the trail-blazing intergalactic heroine Princess Leia in the “Star Wars” franchise and later went on to establish herself as an author and screenwriter with an acerbic comic flair, has died.

Fisher suffered a heart attack on Friday during a flight to Los Angeles from London, where she had been filming the third season of the Amazon comedy series “Catastrophe.” Upon landing, she was quickly rushed to UCLA Medical Center, but after three days in intensive care, she died, a family publicist confirmed. She was 60 years old.

From the moment she first stepped onto the screen in 1977’s “Star Wars,” the character of Leia Organa – whip-smart, wryly funny and fearless enough to stand up to the likes of Darth Vader without batting an eye, with an instantly iconic set of hair buns on either side of her head – inspired generations of young girls to be bold, while inspiring crushes in generations of young boys.

Decades later, when Fisher returned to the role in last year’s “Star Wars: The Force Awakens,” she reflected to The Times on her status as a new kind role model in the pop culture landscape.

“I remember the first time it was weird to me was when someone wanted to thank me because they’d become a lawyer because of me,” Fisher said. “The main thing they said is that they identified with me. I felt like that was somebody that could be heroic without being a superhero and be relatable.”

While Leia was a fierce and regal warrior, Fisher’s offscreen life was more messy, marked by bouts of drug abuse, a complicated family history and struggles with mental illness – all of which she would use as material for lacerating comedy in her numerous works of fiction and nonfiction.

Born into Hollywood royalty on Oct. 21, 1956, to singer Eddie Fisher and actress Debbie Reynolds, who divorced when she was 2, Fisher rocketed to her fame in her own right when director George Lucas cast her as Leia in his space opera while she was still a teenager. She then reprised the role in 1980’s “The Empire Strikes Back” and 1983’s “Return of the Jedi.”

In the wake of “Star Wars,” Fisher continued to act on occasion in films such as Woody Allen’s “Hannah and Her Sisters” and the romantic comedy “When Harry Met Sally…” But the shadow of “Star Wars” was not easy to escape, and it wasn’t until Fisher turned to writing with the semi-autobiographical 1987 novel “Postcards from the Edge” that she began to define herself outside the role of Princess Leia.

In “Postcards from the Edge,” Fisher satirized her own acting career, her offscreen struggle with drug abuse and bipolar disorder and her sometimes stormy relationship with her mother. (The bond between Fisher and Reynolds is explored in of an upcoming HBO documentary, “Bright Lights: Starring Carrie Fisher and Debbie Reynolds.”) “Postcards from the Edge” was adapted for the big screen by director Mike Nichols in 1990 and went on to launch an entirely new career for Fisher as a bestselling author and screenwriter.

Though Fisher’s facility as a writer may have surprised fans who only knew her from her work in the galaxy far, far away, it was hardly news to those who knew her best.

“I started reading really early – I wanted to impress my father, who is unimpressable” she told The Times in 2008. “My family called me ‘the bookworm’ and they didn’t say it in a nice way. I fell in love with words…. By about 16 I wanted to be Dorothy Parker.”

Fisher went on to write several more novels, including “Surrender the Pink” and “Delusions of Grandma,” and, again using her life as material, published a 2008 memoir called “Wishful Drinking,” based on a one-woman show she had performed on Broadway. Less publicly, she also earned steady work as one of the film industry’s most in-demand script doctors.

At the time of her death, Fisher was on tour promoting her recently published book “The Princess Diarist.” A memoir based on diaries Fisher kept around the time she filmed the first “Star Wars” movie,” the book revealed that the actress had carried on an affair with co-star Harrison Ford, who played the roguish smuggler Han Solo, with whom Leia had an often tempestuous romantic relationship.

Indeed, Fisher – who was briefly married to singer Paul Simon in the early 1980s and had a daughter, Billie Catherine Lourd, from a later relationship with talent agent Bryan Lourd – was never one to shy away from uncomfortable or intimate subjects. On social media, she cultivated a brash, wise-cracking persona, whether posting droll one-liners or photos of her French bulldog Gary.

When some moviegoers complained on social media about how much older she looked in “The Force Awakens” than when she had last played the character more than three decades earlier, she retorted on Twitter with her typical sharp wit, “Please stop debating about whether or not I aged well. Unfortunately it hurts all 3 of my feelings.”

Fisher had been confirmed to return to the role of Leia in the next installment in the franchise, “Episode VIII,” due in theaters in December 2017. The film finished shooting this summer, but plot details – including what part Leia plays in the next chapter of the saga – have been kept tightly under wraps.

While some actors might bemoan being so closely associated with a single role for so many years, Fisher never seemed to resent being linked to Leia, even if she did admit to disliking the character’s famous buns, calling them a “hair-don’t instead of a hairdo.”

“It’s not always fun, but it’s certainly life-changing,” she told The Times last year. “I have been Princess Leia exclusively. It’s been a part of my life for 40 years…. I’m like the diplomat to a country that I haven’t been to yet. I am that country.”