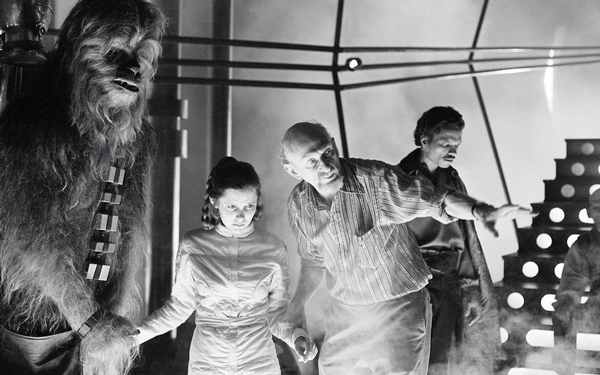 In a scene from the 1980 film "The Empire Strikes Back", Carrie Fisher speaks with director Irvin Kershner during the carbon freezing scene. (Courtesy of Lucasfilm/TNS)

Last year, months before “Star Wars: The Force Awakens” officially reunited the original cast and crew of the Millennium Falcon, there was a small disturbance in the Force. A disgruntled father on the East Coast, outraged over an action figure depicting Princess Leia in her infamous “slave” bikini costume, had denounced the toy as “inappropriate,” sparking a heated debate among fans and critics about the political implications of the outfit.

The woman behind the bikini, actress Carrie Fisher, answered the controversy in typical frank Fisher fashion. “The character is wearing that outfit not because she’s chosen to wear it. She’s been forced to wear it. She’s a prisoner of a giant testicle who has a lot of saliva going on. She does not want to wear that thing and it’s ultimately that chain, which you’re now indicating is some sort of accessory to S&M, that is used to kill the giant saliva testicle. … That’s asinine.”

And just like that, Fisher reclaimed the “slave Leia” look for feminism.

Converting a Frank Frazetta-inspired, barely-there metal two-piece into a flag for female empowerment was just one small example of Fisher’s ability to change the narrative in Hollywood — a career-turned-calling that tragically ended with her death Tuesday.

Skewering stereotypes, inanities and lazy thinking with a lance of wit and hard-won insight was Fisher’s specialty. And for a long time, she did it all by her lonesome.

While Han Solo shirked responsibility and Luke Skywalker fumbled around, Leia got things done. To fellow round-faced girls (and boys) throughout the world, the parallel was obvious: There’s nothing wrong with calling for help, but if the doors won’t open, grab a blaster of your own and shoot a way out.

Leia proved that you don’t have to choose between being the damsel in distress and the hero; you can be both. You could be the princess and the rebel, the peacemaker and the general. Don’t let a bunch of menfolk standing around with their jaws on the floor decide your fate. Sometimes that means going through the trash shoot, sure, but forge your own destiny.

And as Leia was on film, so Fisher became in life, refusing to let her self-described “buns of navarone” dictate her future.

Daughter to Debbie Reynolds and Eddie Fisher, Carrie was the last of a generation of Hollywood royalty, and instead of hiding behind the veneer of societal fame, she tore it down.

Her first novel, the 1987 “Postcards From the Edge,” was a fictionalized version of her own struggles with drug addiction. The film adaptation, for which she wrote the screenplay, played off her own Hollywood upbringing to an even greater extent and jump-started her role as Tinseltown truth-teller.

Fisher was TMI before it was an acronym, much less a hashtag, with better stories and much wittier prose.

What other public figure would reveal the use of electro-convulsive therapy to combat crippling depression, something Fisher explored in her novel “Shockaholic”? Long before “You’re the Worst” and Bruce Springsteen put mental illness into the public purview, Fisher was on her couch discussing her own battle with mental illness on the 2006 TV documentary, “Stephen Fry: The Secret Life of the Manic Depressive.”

And how many Hollywood celebrities publicly bemoaned their own insecurities with such striking self-deprecating imagery? In “The Princess Diarist” Fisher recalled mentally torturing herself during her first “Star Wars” audition, assuming director George Lucas thought her face looked like a “bowl of oatmeal with features.” Although sometimes painfully self-effacing, Fisher’s irreverent delivery brought the audience in on the joke: We all sometimes feel like a bowl of oatmeal, and that’s OK. We can just go sit by Fisher.

Even as she derided the vagaries of celebrity as “obscurity biding its time,” Fisher added new layers of depth to her fame, becoming a sought-after script doctor, writing eight books and turning one, “Wishful Drinking,” into a one-woman Broadway show, starring herself, which then became an HBO special.

And despite years of success and a fan following that would shame even the biggest of A-listers, Fisher never lost a sense of humor about her own status. A cameo on “30 Rock” playing a washed-up feminist icon who drinks wine from a thermos all day seemed like an interpretation of the darkest Carrie Fisher timeline, but what other celebrity would be willing to make that kind of jab at their own career, yelling to Tina Fey’s Liz Lemon: “You’re my only hope!”

Fisher was always unapologetically Fisher. When more than 5,000 people showed up to the Star Wars Celebration in London to hear the actress speak, she started off the panel by handing the mic to her dog, Gary Fisher. Even her Twitter account was penned in an indecipherable Fisher code, made up of emojis and jokes about searching for her face on Google Image.

And when the princess finally returned to the galaxy far, far away with “The Force Awakens” it wasn’t as an imperious queen or out-of-touch aged ambassador. Instead, she was Gen. Leia Organa, and it was so good to have her back.

Even with the passage of time and against the roar of their fans, Leia and Fisher remained their screwball tells-it-like-it-is selves. While the general issued orders, the actress fretted. Before “The Force Awakens” opened, Fisher told the Los Angeles Times she worried that she would not be as good this time, that new people were better, her hair once again looked terrible.

But then the truth-teller emerged: “Everyone thinks the same way,” she said with a shrug. “Only some people pretend better.”

Carrie Fisher was never just a “her,” she was irreducibly an “us.” Her wit was empowering. Her words were strong. And she left this universe forever changed.