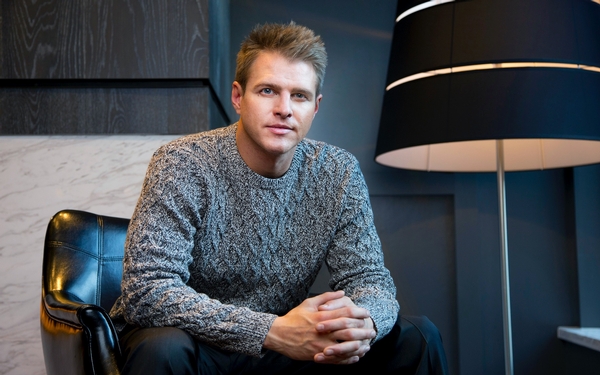 A new vibe is blowing through the menswear scene this winter.

In the corporate world, execs are trading in classic, boxy suits for soft, tailored blazers and relaxed trousers in soft herringbones and funky windowpane prints.

Meanwhile, men with a more casual style have (thankfully) moved beyond the slim-yet-droopy-backside jean to the fitted jogger-and-custom-sweatshirt combo. How do they pull it all together? With a sports jacket and velvet high-tops.

In other words, fashionable guys spent most of 2016 building wardrobes to reflect the new fashion reality — the tailored in-between.

“Men are dressing down, but they are also dressing up,” said Jian DeLeon, senior menswear editor for the global trend forecasting firm WGSN. “It’s the choose-your-own-adventure era in menswear. He’s trying to figure out which rules he wants to break, depending on what he’s feeling like and where he is in life.”

“We have guys who are coming in ready to try something more interesting and comfortable,” said Matt Brown, vice president and general manager of Saks Fifth Avenue in Bala Cynwyd.

This fall, Saks introduced its seven office essentials: the refined top (a dressier polo), the perfect (tailored) pant, the hybrid shoe, the sporty suit, the clean sneaker, the easy layer, and the leather bag.

“The idea is to mix a more casual look like a sneaker or a pullover into his wardrobe mix,” Brown said.

At the same time, guys are using the tailored pant or sporty suit to take their existing look up a notch. Men also are going more custom, not only for the three-button-blazer-and-vest-suit combos, but for their athletic wear. After all, athleisure requires a better fit.

“These guys have spent the last few years learning about custom,” said Brian Lipstein, the designer behind Henry A. Davidsen. “Now they want the rest of their wardrobe to feel just as nice.”

A retail landscape that’s wooing the Y chromosome is paying off. According to the New York-based consumer tracking service the NPD Group, U.S. menswear sales continue to outpace women’s, having increased 3 percent this year over last year, from $62.5 billion to $64.4 billion, with the fastest-growing categories being two-piece athletic sets and accessories.

Runway designers have taken note. In the last year, many of the most popular collections in Paris, Milan, and New York have opted to show menswear on their women’s runways.

Interest in men’s fashion has come a long way since the days of the metrosexual — the original style-obsessed dude who, in the early 2000s, emerged from the ashes of the sloppy ’90s wearing a very fitted suit and carrying an umbrella.

The typical guy largely ignored this look. But it wasn’t long before the ways of the hipster (favoring all things fitted while twirling his ponytail into a man bun) or the lumbersexual (choosing beards and plaid shirts) caught on. With each trendy dude reincarnation, men’s fashion has blossomed on runways — and Instagram.

So as we stand at the cusp of 2017, it seems the old fashion fears are gone, whether we’re talking about guys who suit up, tend toward the androgynous, don athletic attire, or — amazing as it may sound — like all three. His wardrobe can take him from day to night. Sound familiar, ladies?

“What finally happened is that guys in basketball like Dwyane Wade and Chris Paul began adopting these looks in their own way, and they became universal and aspirational,” said Sabir Peele, a menswear brand consultant and founder of Men’s Style Pro.

“Guys just started to understand, ‘I can do all of this. I can be sporty or wear a suit like a corporate guy. I can create my own look.’ “

With this new experimentation came an excess of new accessories this year: dotted pocket squares, solid knit ties, smart fedoras, jackets with custom linings. And the shoes — whether shined to dress up or clean sneakers to dress down — pull everything together.

Fashion Focus
Financial Tips for Getting The Most out of a Shopping Spree
1,062 views

Fashion Focus
How to dress post-pandemic? Just do you.
958 views

Fashion Focus
Summer’s coolest dress is an instant classic. OMG, did you see this?
681 views

Fashion Focus
Fashion after herd immunity, or what to wear to the post-pandemic party
377 views

Fashion Focus
Forgotten how to get dressed up during the pandemic? Our guide to the basics
399 views
bid=||