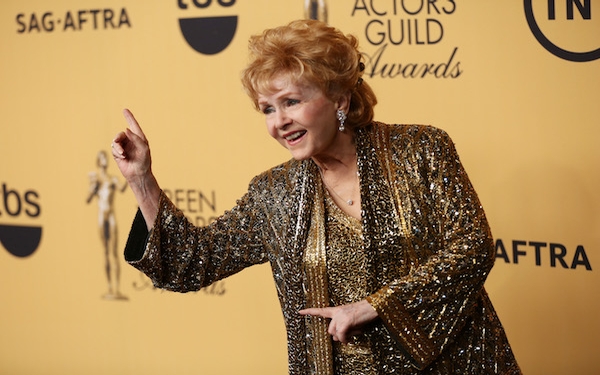 Debbie Reynolds, an actress who sang and danced her way into film history opposite Gene Kelly in the classic 1952 musical “Singin’ in the Rain,” a movie that helped turn her into a sweetheart of American film, has died. She was 84.

Reynolds, who was a major collector of Hollywood memorabilia and toured in a one-woman revue into her 80s, died Wednesday in Los Angeles, her son told the Associated Press.

Her death came a day after her daughter, Carrie Fisher, died at the age of 60. Fisher, a well-known actress and author in her own right, died four days after suffering a cardiac incident on a flight from London back to Los Angeles.

On Tuesday, Reynolds had posted a statement on Facebook about the outpouring of grief about her daughter’s unexpected death.

“Thank you to everyone who has embraced the gifts and talents of my beloved and amazing daughter,” she wrote. “I am grateful for your thoughts and prayers that are now guiding her to her next stop. Love Carries Mother.”

Between 1950 and 1967, she appeared in more than 30 movie musicals and light comedies, receiving her lone Oscar nomination for playing the title character in 1964’s “The Unsinkable Molly Brown.” Many critics considered it her most memorable early role, and it was a favorite — Reynolds related to a woman with tremendous zest for life.

Off-screen, she starred as the wronged woman in a love triangle that many in the late 1950s considered the Hollywood scandal of the century. Her first husband, pop singer Eddie Fisher, left Reynolds — perceived by moviegoers as the girl next door — for sultry actress Elizabeth Taylor.

Standing alone in her front yard in 1958, the abandoned Reynolds met the media. Fastened to her blouse was a diaper pin, a reminder of the couple’s two young children inside. The “nuclear-like split,” as a Los Angeles Times article from that era described it, proved disastrous to Fisher’s career.

The outpouring of public sympathy for Reynolds only served to increase her fame — the comedy “The Mating Game” that she co-starred in with Tony Randall was one of four movies she appeared in the next year.

But as the frothy films she was known for went out of style in the late 1960s in favor of message movies, Reynolds turned to the stage. She earned a Tony Award nomination for playing the title role in a Broadway revival of “Irene” in the early 1970s then gave birth in Las Vegas to the nightclub act that she would perform for decades.

In 1996, she returned to the big screen for her first major part in years, playing the title role in the well-reviewed Albert Brooks’ comedy “Mother.” The role allowed her “to bare a steely edge beneath her famously perky exterior,” People magazine said in 1997. It also earned her some of the best reviews of her career.

She was just 18 when studio chief Louis B. Mayer cast her in “Singin’ in the Rain” over the objections of Kelly, who wanted a professional dancer for the part. Decades later, Reynolds said she could still recall the pain from three months of dance rehearsals that made her feet bleed.

“‘Singin’ in the Rain’ and childbirth were the hardest things I ever had to do in my life,” Reynolds wrote in her 1988 autobiography “Debbie.”

The movie about Hollywood’s transition to talkies was a box-office hit, and her portrayal of an up-and-coming spunky actress turned Reynolds into a star. It is widely considered one of the greatest movie musicals.

One of the keys to “Singin’ in the Rain’s” success was its “tremendous amount of energy,” dancer Donald O’Connor, who also starred in the film, told NBC in 2002. “Everybody liked each other” and Reynolds came off “as a great trouper” in the film, he said.

Reynolds earned early notice as an outspoken teenager in “Two Weeks With Love” (1950) and for starring in “Tammy and the Bachelor” (1957), the first in a series of popular teen films.

In 1969, she launched “The Debbie Reynolds Show,” a TV sitcom with “I Love Lucy” overtones about the unpredictable wife of a newspaper columnist. When NBC aired a cigarette commercial during its debut, she threatened to quit. Instead, the sponsor pulled out and the series was off the air within a year.

Contemporary TV audiences knew her from her recurring Emmy-nominated role as Grace’s eccentric actress mother on the NBC show “Will & Grace.” She also gained notice in the late 1990s for her supporting role as Kevin Kline’s mother in the satirical film “In & Out.”

Her last role was Liberace’s mother in the 2013 HBO movie “Behind the Candelabra.” She received the 2014 Screen Actors Guild life achievement award.

Work was a necessity for the thrice-divorced Reynolds, whose public image was far more rosy than her private life.

After Reynolds married Fisher in 1955, they had two children, Carrie and Todd. Their daughter became an actress best known for playing Princess Leia in the “Star Wars” movies and, later, a successful writer. Their son was named for Fisher’s best friend, producer Mike Todd.

When Mike Todd died in a plane crash, Fisher consoled his widow, Taylor — a friend of Reynolds’ from their days as teenage contract players at Warner Bros. Fisher soon left Reynolds, whom he had met in a publicist’s office.

“I always thought their whole courtship was a sort of press release,” Carrie Fisher told People magazine in 1988. “They were riding the wave of being a media couple. … And I think the burn-off on the infatuation was very quick.”

Reynolds’ second and third husbands left her in financial ruin, she often said.

Husband No. 2, Harry Karl, was a shoe magnate who lost his millions and hers through gambling and bad investments, according to her autobiography. He left her with her two children and his three to raise when they divorced in 1973 after 14 years of marriage.

In 1997, the Las Vegas hotel and casino she opened in the early ’90s went belly up and she filed for bankruptcy. Reynolds blamed her third husband, real estate developer Richard Hamlett, for mismanaging the property. They divorced in 1996 after more than a decade together.

“My life has just spun along, sort of like a wheel on a car that somebody else is driving,” Reynolds told The Times some years ago. “I’ve just gone with it.”

She was born Mary Frances Reynolds on April 1, 1932, in El Paso, Texas, to Ray and Maxine Reynolds. After her father got a job as a carpenter for the railroad in the late 1930s, the family built a house in Burbank near Warner Bros.

Growing up, Reynolds was a natural mimic, often performing for classmates at John Burroughs High School to compensate for the embarrassment she felt over her spare wardrobe.

“Instead of cashmere, I wore a comic routine,” Reynolds wrote in her book.

She had planned to be a gym teacher but at 16 won the Miss Burbank beauty contest doing an imitation of her idol Betty Hutton performing. Reynolds had entered for the free blouse and scarf promised each entrant.

The contest judges — studio talent scouts — were so impressed with her naturalness that they flipped a coin to see who got to interview Reynolds first. Warner Bros. won, and she rode her bike to the screen test.

Soon, she was under contract for $65 a week and was given a new first name by the studio chief who deemed “Mary Frances” too old-fashioned.

“I didn’t want to be called Debbie, but that’s the name Jack Warner gave me,” she later said.

The studio did not seem to know how to use Reynolds — she mainly wandered the lot and took dance and drama lessons. When MGM, home of the movie musical, expressed interest 18 months into her contract, Warner Bros. gave her up. She remained an MGM contract player for about a decade.

In the 1950s, she had hit singles with songs from two of her movies — “Aba Daba Honeymoon” from “Two Weeks With Love” and the theme song “Tammy” from “Tammy and the Bachelor.”

On Broadway, she performed the original revue “Debbie” over two weeks in 1976 and starred in “Woman of the Year” in the early 1980s.

In 2001, Reynolds made the television movie “These Old Broads.” Written by her daughter, it included a part for Taylor and sent up their scandal-ridden past.

Reynolds and Taylor had repaired their friendship in 1964. Taylor, then married to actor Richard Burton, told Reynolds she “always regretted” having hurt her, Reynolds told The Times in 2001.

By then, their shared past was just another piece of Hollywood history, much like the “Cleopatra” headdress that Taylor wore in the movie — and which became part of Reynolds’ extensive collection of movie memorabilia.

When MGM decided to liquidate its storage room of costumes, props and furniture in 1970, Reynolds tried to buy it for $5 million but the studio decided to auction it piece by piece.

Beginning with the auction — “when my hand never went down,” she often said — she built a 4,000-piece collection. Her strategy was to buy whole sets from Oscar-winning films and costumes worn by actors she was certain would go down in history.

“I felt I knew what a fan wanted to see,” Reynolds told The Times in 2011. “They wanted to touch costumes.”

While she had displayed some pieces in a museum at her Las Vegas hotel, she gave up on her longtime dream of opening a museum dedicated to Hollywood memorabilia and auctioned many of her treasures in 2011. They brought in more than $25 million.

Monroe’s white dress that billowed in “The Seven Year Itch” went for $4.6 million, Judy Garland’s blue gingham dress from “The Wizard of Oz” drew more than $1 million and a guitar played by Julie Andrews in “The Sound of Music” sold for $140,000.

“I haven’t had a lot of time until I decided to auction off my memorabilia,” Reynolds told The Times in 2012. “I still have a lot of my things, but I decided to become rich, and I had all of this that I’d invested my money in, millions over the years. … I decided to pull some money out so that Carrie and Todd and I could do whatever we wanted to do.”

In addition to her son, Reynolds is survived by a granddaughter, actress Billie Lourd.