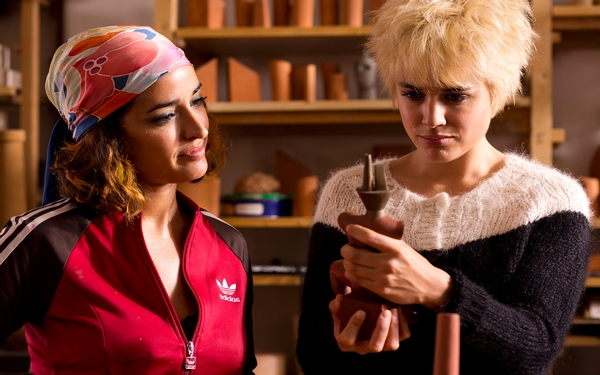 “The wallpaper is a bit oppressive,” Julieta observes, and she’s being kind. The apartment looks promising enough, but the wallpaper is in fact extremely oppressive, with an ornate pattern and indigo-gold color scheme better suited to a rug than an entire apartment — a visual affront to the tenants within and the lovely, sun-dappled Madrid scenery just outside their window.

By that point in Pedro Almodóvar’s radiant and absorbing new melodrama, you may find yourself not just nodding in agreement with Julieta, but also suppressing a chuckle. This is a film by Almodóvar, after all, where women and men (but mostly women) inhabit spaces beautifully designed to complement and amplify their emotions, and where even the accidental presence of ugliness or non-designer clutter amounts to a cardinal sin. By this point in his career, he has more than earned the right to point out his own indulgences, especially when he does it with such a modest, unpretentious sense of fun.

His self-referentiality goes well beyond the decor. A subdued, autumnal melodrama about mothers and daughters, steeped in regret and draped in Hitchcockian flourishes, “Julieta” doesn’t pretend to offer anything we haven’t already seen from Almodovar. Once upon a time, its heroine was meant to be played by Meryl Streep, in what would have been Almodovar’s first English-language production — a thwarted pairing of legends that would have no doubt supplied the press attention and marketing hook that have so far evaded “Julieta.” (It drew a respectful but muted reception earlier this year at the Cannes Film Festival.)

The refusal of novelty in “Julieta,” far from being a narrative deficiency, actually suits a story whose true subject is the persistence of repetition — the inevitably recurring patterns of joy, grief and generational misfortune that Almodovar, a practiced geometrician of loss and desire, points out with characteristic wit and feeling.

This time he has drawn those patterns from an unusual and rewarding literary source supplied by Alice Munro, specifically three stories — “Chance,” “Soon” and “Silence” — which center on a Canadian woman, Juliet, at three different stages of life. As he did with the even more incongruous source material for “Live Flesh,” his sizzling 1997 adaptation of a chilly Ruth Rendell psychological thriller, Almodovar has performed a delicate act of cultural surgery and infused the result with his own exquisite formalism. (The rich cinematography is by Jean-Claude Larrieu; the delicate score, as ever, by Alberto Iglesias.)

Juliet is now Julieta, and she’s played by two different actresses — a gently Bunuelian conceit that underlines the temporal and emotional breadth of the film’s elegantly compacted 99 minutes. The first Julieta we see (movingly played by Emma Suarez) is a mild-mannered, middle-aged woman living in Madrid, though she’s about to move to Portugal with her boyfriend, Lorenzo (Dario Grandinetti, from Almodovar’s “Talk to Her”). But a chance reunion stops her cold, sending her back to a past that she had wrongly believed was firmly behind her.

In flashback, we see a younger, punkier, peroxide-blond Julieta (Adriana Ugarte, soulful and spirited) boarding a train on a snowy night, where her fateful encounters with two different men foreshadow the story’s twinned themes — it’s like a small double helix of death and desire. By the end of her journey, Julieta has fallen hard for Xoan (Daniel Grao), a scruffily handsome fisherman who lives on the Galician coast with his unseen, bedridden wife.

There are other characters who flit in and out, including Xoan’s sculptor friend Ava (Inma Cuesta) and Julieta’s parents (Joaquin Notario and Susi Sanchez), whose declining relationship unsettles her for reasons she isn’t entirely comfortable admitting. Eventually, too, Julieta has a daughter, Antia, whose flickering presence in the story — she’s played by a different actress in almost every other scene — captures the fleeting nature of happiness in a way that feels bittersweet beyond words.

Through it all, Almodovar keeps returning to Hitchcock, and every new reference adds a fresh layer of unease. The film’s opening stretch harks back to the railway intrigue of “Strangers on a Train,” “North by Northwest” and “The Lady Vanishes,” while Julieta’s extended Galician stay is pure “Rebecca” — right down to the Mrs. Danvers-like housekeeper, Marian (Rossy de Palma, a frequent Almodovar muse), her scowl oscillating between comic relief and genuine menace.

Almodovar’s command of the history and syntax of classic Hollywood melodrama is second to none; had he bothered to include Julieta’s surname in the title, it would only have cemented the film’s obvious spiritual connection to “Stella Dallas” and “Mildred Pierce.” Grief and heartache are hardly new sensations in this director’s tear-sodden filmography, but what’s remarkable about this movie — and, come to think of it, borderline novel — is the way he treats the very notion of loss as a structuring concept.

At times “Julieta” suggests a melodrama by subtraction, as if the narrator were still trying to stifle memories and emotions too painful to fully confront. The traumas that cut the deepest — a fatal accident, an inexplicable departure — are left off screen, and they’re no less affecting for it. The tearjerker ending we expect never happens, and in some ways, the one we get is even more shattering.

“Julieta” is a melancholy, fragmentary experience, and you can see what those longing for another “Volver” or “All About My Mother” have found wanting, without necessarily sharing their sentiments. The movie may not have the audacity and emotional grandeur of a new Almodovar masterpiece, but in every particular — its seamless manipulation of time, its sly infusions of comedy, its expert direction of actors and, yes, its fabulous wallpaper — it confirms his mastery nonetheless.

For more information about this film, visit SonyClassics.com/Julieta.

'Juliet' is currently playing at The Landmark in West L.A and Regency Theatres at South Coast Village in Costa Mesa.  It opens at the following Laemmle Theatres:  Playhouse 7 in Pasadena (1/6), Town Center 5 in Encino (1/6), Monica Film Center in Santa Monica (1/20), Claremont 5 (1/20) and the NoHo 7 in North Hollywood (1/20).

In Spanish with English subtitles

Rating: R, for some sexuality/nudity