Here’s who had the worst 2016 in Washington 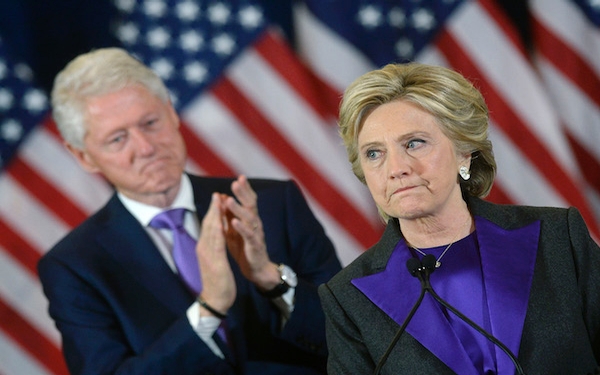 From the ugly rhetoric from both sides of the political fence to allusions about the size of a candidate’s manhood on a presidential debate stage, to a yearlong shoutfest on cable TV, 2016 got worse and worse.

Nearly every political norm was broken during 2016, including a foreign government meddling in the elections, which led to a Democratic Party meltdown and Donald Trump’s stunning upset win in the presidential election.

—Hillary Clinton: Clinton’s campaign would lose in multiple states where Barack Obama had triumphed. After losing the Democratic nomination in 2008 to Barack Obama and subsequently serving as his secretary of State, this was supposed to be the year Hillary Clinton would have nothing short of a coronation. With no young insurgent competitors to challenge her, the entire Democratic leadership lined up behind her, from Senate Minority Leader Harry Reid to Obama.

Instead, the former New York senator and first lady was faced with a tougher-than-expected primary challenge from Sen. Bernie Sanders, I-Vt. The self-proclaimed democratic socialist would give her a tough run in Iowa and beat her in New Hampshire. He would drag out the contest until June, when it was all but clear Clinton would be the nominee.

Clinton also faced enormous headwinds in the questions about her use of a private email server that dogged her from when that was revealed in March of 2015 through Election Day. Initially, it looked like the coast was clear after FBI Director James Comey said in July that he would not recommend prosecution despite the fact he said the actions were “extremely careless.” But Comey would roil the contest 10 days before the election when he notified Congress that relevant emails had been discovered in an unrelated case.

Clinton’s campaign and Democrats all but ignored rural areas that had been friendly to the party. In the end, despite winning the popular vote, Clinton would wind up losing states once considered Democratic safe havens like Ohio, Pennsylvania, Michigan, and Wisconsin to Trump.

—House Speaker Paul D. Ryan: Ryan went from former vice presidential nominee to being booed in his home state of Wisconsin by Donald Trump supporters. On the surface, Ryan looks like someone who is a winner in this election year. He played it safe with Trump, endorsing him but keeping him at arm’s length and now he finally has a Republican president and majority in both the House and Senate to pass his conservative agenda.

But Ryan made a series of political missteps that could cost him in 2017. As speaker of the House, Ryan stayed neutral during the presidential primaries and spurned numerous attempts to be recruited to run for president himself to save the party from Trump.

When Trump won the nomination, Ryan initially declined to support Trump, saying “I’m just not ready” before eventually backing him.

But Ryan eventually found himself stuck with questions about every inflammatory statement from his party’s presidential candidate rather than his proposed “Better Way” plan, calling Trump’s comments about a Mexican-American judge, “the textbook definition of a racist statement.”

The final straw for Ryan came when a video leaked of Trump hinting at making unwanted sexual advances toward women. Ryan uninvited Trump from campaigning with him in Wisconsin and told members to “do what’s best for you in your district” when it came to Trump.

In turn, Ryan faced the wrath of Trump, with the bombastic billionaire first saying he wouldn’t endorse Ryan in his primary before relenting. Trump also called Ryan a “weak and ineffective leader.”

Of course, winning has a way of healing wounds and Ryan has said “our relationship is fine.” However, when Trump visited Ryan’s home state of Wisconsin and mentioned his name, the crowd booed despite Trump saying he “appreciated his genius more and more.”

Trump followed that with, “Now, if he ever goes against me, I’m not going to say that.”

But this time around, Wasserman Schultz would not be so lucky. She faced accusations that she was keeping her thumb on the scale for Clinton against Sanders by limiting the number of primary debates or placing them at odd times.

She was pushed out after emails revealed by WikiLeaks indicated the committee as a whole favored Clinton intentionally. Wasserman Schultz would win her primary handily against Tim Canova and win re-election but she likely has reached her high-water mark.

—Sen. Ted Cruz: Cruz, R-Texas, went from a conservative favorite to lapdog trying to win supporters of Donald Trump. The Texas senator has never been well-liked on Capitol Hill and his presidential ambitions revealed it.

While at times GOP presidential candidates tried to differentiate themselves from Trump, Cruz danced around him, in hopes that Trump’s supporters would flock to him once Trump imploded.

The implosion never came. Instead, after winning in Iowa, Cruz failed to win the next three contests. He also failed to rack up Senate endorsements until it was clear he would be the only man standing against Trump. Former House Speaker John A. Boehner summed up the party’s feelings toward Cruz when he called him “Lucifer in the flesh” and a “miserable son of a bitch.”

By then, Trump had the momentum and had taken to raising questions about Cruz being born in Canada, insulting his wife, implying his father was involved in the assassination of John F. Kennedy and giving him the moniker of “Lyin’ Ted.”

Cruz would eventually go off on Trump, calling him a “bully,” and would exact his revenge at the Republican National Convention, telling delegates to “vote your conscience” rather than endorsing the party’s nominee.

Cruz would relent when there was backlash from his party as well as threats of a primary challenge for his Senate seat and endorsed Trump. But the endorsement was poorly timed as it came shortly before the “Access Hollywood” tape of Trump’s remarks about women surfaced.

Cruz ended 2016 as he began it, without many friends and further alienated from his party.

—The DSCC: Katie McGinty was the DSCC’s preferred candidate in Pennsylvania but came up short against Sen Pat Toomey. In election year with Republicans defending more seats than Democrats and the Republican presidential candidate regularly offending groups that traditionally vote Democrat, the DSCC should have had a banner year.

Instead, the campaign wing responsible for helping Democrats get elected to the Senate backed a number of candidates who would go on to get crushed in November in some of the states that were crucial to Trump’s win.

In Ohio, the committee chose to back former Ohio Gov. Ted Strickland in his primary against Cincinnati City Council member P.G. Sittenfeld. Strickland would in turn face a barrage of outside money against him as he failed to raise the cash he needed to compete. Eventually, the DSCC would cut its losses and delay ad buys for Strickland and GOP incumbent Sen. Rob Portman would beat the former governor by double digits.

In Pennsylvania, the Democratic establishment was wary of seeing former Rep. Joe Sestak in a rematch against Sen. Pat Toomey, as Sestak had been notoriously difficult to work with. Instead, the DSCC poured in $425,000 on TV ads in the primary to support his opponent, Katie McGinty. McGinty would triumph in the primary, but Toomey, who was cagey about his support for Trump until he revealed on Election Day that he had voted for him, would beat her by a point and a half.

In Florida, with Marco Rubio running for president and saying he would give up his Senate seat, Democrats had a chance to pick up a seat in an important swing state. But they chose to go with Rep. Patrick Murphy, a candidate with little experience or buzz. Their other choice was Rep. Alan Grayson, who had become a liability because of his inflammatory remarks and accusations he had abused his ex-wife.

Murphy would win the primary but Rubio jumped back into the Senate race. Murphy struggled with name recognition and inconsistencies in his record as a businessman further hurt him. Like with Strickland, the DSCC pulled its support for Murphy. Rubio would eventually win, outpacing Trump in the state.

The DSCC didn’t fare well where it backed progressives, either. It supported progressive favorite former Sen. Russ Feingold in Wisconsin, who went on to lose big to Republican Ron Johnson, and in North Carolina, where it supported Deborah Ross, a former state director for the American Civil Liberties Union, who would lose to incumbent Richard Burr.

Hopes for an upset also fell short in Missouri, where Secretary of State Jason Kander failed to beat Sen. Roy Blunt and plans for an Indiana miracle fizzled when former Sen. Evan Bayh tried running for his old seat only to face questions about his work after leaving office.

The DSCC did not fail entirely this time around. It successfully backed Rep. Chris Van Hollen against Rep. Donna Edwards in the Maryland Senate primary and his victory in the general election was not even close.

But in all, Democrats would only gain two seats in their Senate caucus, in a year that a takeover of the chamber once seemed likely.

—The media: For the first part of Trump’s candidacy, few outlets chose to take him seriously and, as a result, took a hit in their credibility when he began to rise.

Conversely, cable news outlets devolved into shouting matches, with accusations running rampant. They also tended to give Trump tons of free air time without serving as a check on him, whether it was literally showing an empty podium instead of a speech by Clinton or buzzing about his latest inflammatory tweet.

Meanwhile, the primary and general election debates would devolve into arguing between the candidates, famously culminating in a primary debate where Trump bragged about the size of his hands and his manhood. The crowds wound up bearing more resemblance to that of a WWE wrestling event.

Similarly, social media proved to be both a place where to get information as well as a place where facts went to die. Trump used his Twitter account to malign everyone, and on Facebook the debate over ”fake news” caused questions over how the social media giant selected stories for its news feeds.

People also used social media to create their own personal echo chambers. A Pew study from October showed more than a third of users changed their social media settings to screen out or block others whose political views offended them and almost a third said they blocked or unfriended someone because of their political views.

—Obama: The outgoing president is in a peculiar position. He currently enjoys approval ratings at 53 percent, which was the average approval rating Ronald Reagan had in his last year. In most cases, this would be cause for a presidential victory lap.

But instead, Obama now has to help Trump, a man who first gained political buzz five years ago questioning whether the first black president was indeed an American citizen, ease into the presidency.

Similarly, Republican majorities in Congress are already planning to overturn his signature health care overhaul that caused him to lose so much political capital early in his presidency.

And all this time, Obama has seemed sanguine about his legacy being in jeopardy. Though he campaigned vigorously for Hillary Clinton, he appeared to lecture her and other Democrats after the election about how to appeal to white working class voters.

Ever the former constitutional law professor, Obama had indictments for the media, saying in his last news conference that Clinton was treated unfairly.