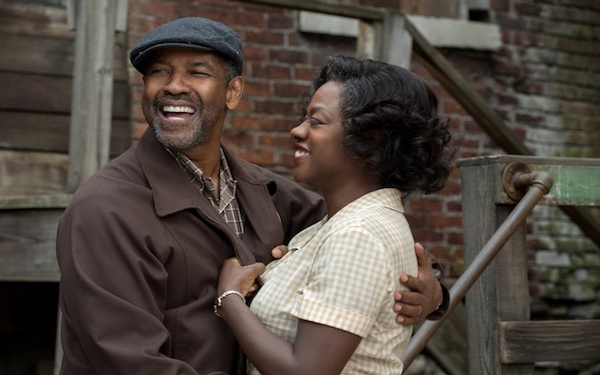 Denzel Washington knows August Wilson’s place in the hierarchy of American theater: at the top.

“He is an American master,” says the actor, who directed and stars in the film adaptation of Wilson’s 1980s Pulitzer- and Tony-winning play, “Fences.”

“Tennessee Williams, Arthur Miller, Eugene O’Neill, Edward Albee, August Wilson. He is one of the great playwrights in American history.”

In “Fences,” now in theaters and which is high on the list of awards-season contenders, Washington reprises the role that won him raves — and a Tony — on Broadway in the 2010 revival.

Set in the 1950s, “Fences” is the sixth entry in the playwright’s 10-play Pittsburgh cycle examining the African American experience. It explores the tensions and struggles, the intense to-and-fro, the heartbreak and hopes of the Maxson family.

Washington is Troy, the patriarch, a onetime star in baseball’s Negro Leagues, now a garbage collector for the City of Pittsburgh. Viola Davis, reprising her role from the stage revival, too, is Rose, his wife. The couple’s son, Cory, is finishing high school and has landed a scholarship offer to play football in college. Troy’s older son from a previous marriage, Lyons, shows up now and then to ask for money — at least that’s how Troy interprets the motivation behind the visits.

There is also Troy’s brother, Gabriel, a damaged World War II vet. And there is Bono, Troy’s coworker and best friend. Late in the second act, another family member — a young girl — appears.

“In this play, it is specifically an African American family, but the themes are universal,” Washington said on the phone recently from Los Angeles. “When people ask me what do I want audiences to get from ‘Fences,’ I say it depends on what they bring to it … . It depends upon who you are.

Washington, who turns 62 on Wednesday, says he doesn’t think he could have directed the film — it’s his third behind the camera, after “Antwone Fisher” (2002) and “The Great Debaters” (2007) — if he hadn’t already come to know Troy Maxson, and the world he inhabits, so deeply on stage.

“It’s too big and complex a role to try to figure out while I’m directing — just the sheer volume of it,” he said. “And it was never my plan — I didn’t do the play just to do the movie.

“Although I did.” Washington stops and issues that wily trademark laugh.

“I did the play,” he said, “and then when we had such a success and it was going like gangbusters, I was like, ‘OK, now I know I can do it, act in it, I know I can do the part.’ But then it still took another three or four years of — I don’t know what I was doing — slacking off, or just not being ready yet.

The actor brought most of his company from Broadway with him to the screen project. Along with Washington and Davis, Stephen McKinley Henderson (as Bono), Russell Hornsby (Lyons) and Mykelti Williamson (Gabriel) made the transition from theater to film.

Only Jovan Adepo, who plays Cory — and who has the searing “Why don’t you like me?” confrontation with his father — and 10-year-old, scene-stealing Saniyya Sidney, are new.

“We had the right players,” Washington said. “It’s a cliche, but it’s true: 80 percent of directing is casting.”

And what about the adjustments that had to be made going from live theater to film? From projecting out to the far rows of a big house to capturing the drama and dynamics close up on camera? Was the change in scale hard to calibrate?

“No, not really. The bigger shift I asked everyone who had done the play before to make was to start fresh — let’s start from a place of love with it.

“I had a two-week rehearsal period so that Jovan could catch up and Saniyya could catch up, but — and Viola has talked about this — there’s no such thing as ‘film acting’ vs. ‘stage acting.’ It’s not like you suddenly have to change your style, or your interpretation of the role. Yes, we won’t have to be as ‘big,’ obviously, as in a theater — because we’re not in a theater. But Viola and Mykelti — he goes all the way back to Forrest Gump — they’ve all done movies, they know how to do it.

Although Washington now has two iterations of “Fences” behind him, he’s not finished with August Wilson. After doing “Fences” on Broadway and then readying the adaptation for film, Washington was approached by the playwright’s estate to take charge of the entire Wilson canon.

“I’ve made a nine-picture deal with HBO,” he said. “I’ve already got the first screenplay, for ‘Ma Rainey’s Black Bottom.’ That’ll be next — we probably won’t see that until late next year, or after. I’ve got to figure all of that out.

He will serve as executive producer of the entire series of plays.

That’s quite a legacy to be handed, and quite a responsibility. “I couldn’t believe it,” Washington said. “But if it gives me a reason to get up in the morning — I mean, I’ve got a 10-year project here, at the very least.”