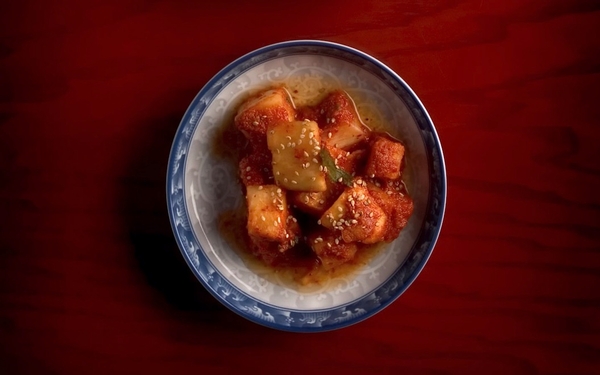 The surge in popularity of fermented foods in recent years — eating them, creating them at home, exploring different cultures and cuisines — is based largely on the idea that this stuff can be really good for you.

In today’s filtered, purified, sanitized, antibacterial world, you might think avoiding bacteria of any kind is a good thing. Turns out, plenty of bacteria, invisible to the naked eye, are plastered all over our food and working on our behalf.

Yes, that food you forgot was in the back of your fridge is fermenting, but not in a good way. Healthy fermentation requires a lot of care and control, but it’s very doable.

Here’s how it generally works. Through a process called lacto-fermentation, bacteria found in our natural environment feed on sugars and starches in a process that creates health-promoting enzymes, an array of probiotics and much more.

For an introduction to the wonders of fermented foods, we’re including a step-by-step rundown of how to make a fermented dish, along with two recipes that use foods that are already fermented and available at most mainstream grocery stores.

But lest you think this is about to be a health lecture instead of a celebration of food and flavor, you should know that fermented food is anything but drudgery or sacrifice. While picky eaters might find some dishes challenging at first, fermented foods include chocolate, coffee and sourdough bread made with a starter teeming with lactobacillus. It’s all kinds of things you already love.

“With chocolate, many people don’t even realize that it’s a fermented food,” said Ramon Perez, owner of the highly regarded Puur Chocolat based in Sacramento. “It’s basically the cacao fruit that goes through a fermentation process. It has this beautiful high water and sugar content that make a beautiful environment for these micro-organisms to grow and culture.”

Perez, who regularly travels the world in pursuit of new flavors and food experiences, has visited numerous cacao fermentation rooms over the years. He said those sensory experiences make clear how crucial the fermentation process is to the chocolate we know and love.

“If it’s your first time to a fermentation room, it’s pretty pungent,” Perez said. “It’s intense. The funny part is, as you spend some time there, all of a sudden you become familiar with that smell and the familiar smell of cacao comes to you. That’s the unique part — once you get past that funkiness, the chocolate smell is there.”

Many folks in the region who get into eating fermented foods on a regular basis eventually find their way to Koreana Plaza in Rancho Cordova, Calif. It’s a giant grocery store and vast culinary wonderland wrapped into one. The primary focus is on Asian grocery items, but most cultures and cuisines are represented.

There, you’ll soon encounter the area’s largest selection of fermented foods. Byong Joo Yu, the upbeat owner, said fermented foods are a major part of Korean cuisine and a key reason why Asian people tend to be slimmer and live longer than Americans.

But he said non-Asian Americans have begun buying fermented foods at Koreana in far greater numbers.

“They are really interested in food for good health,” Yu said as he walked the aisles of his store. “They eventually found out that a lot of those fermented foods are good for the health.”

Koreana devotees Randy and Christina Kautz began fermenting their own food early in 2016 and have seen significant health improvements since.

“We kept hearing about healing your gut. One of the ways to do that is fermented food,” said Christina Kautz. “I dove in and I did it.”

Referring to kimchi made with napa cabbage, she said, “You chop everything up, you massage a little salt into it, and I just cover the bowl and let it sit for a few days.”

Bacteria grows. The aroma becomes pungent. For the uninitiated, things start to get a little weird.

Yes, the couple admit to being a little apprehensive to taste the first batch. “Now we don’t like to go a day without it,” she said.

“It’s a staple for breakfast,” added Randy, who likes to have eggs, avocado, tomatoes and either kimchi or sauerkraut to start his day.

Along with eating fermented foods, he has cut back on sugar and flour, and has lost 30 pounds since February.

“I don’t know if I have a healthier gut, but I feel a hundred percent better than I used to,” he said. “I have a ton more energy and I’m a lot more alert.”

Though they have limited their fermentation efforts to kimchi and sauerkraut, they eventually hope to expand their repertoire.

One easy way to do that is with kombucha. Considered a hippie drink only a few years ago, kombucha, or fermented tea, has gone mainstream, in part because people see it as a tasty alternative to soft drinks and they’ve embraced the health benefits.

That’s what inspired Chris Tapio to start making his own.

“I was doing a very conscious health kick a few years ago and was looking for low-calorie drinks to wean myself from soda,” said Tapio, a public affairs consultant who describes himself as an avid home cook. “I was getting tired of drinking iced tea, so I gave kombucha a shot.”

Once you get the culture, known as SCOBY (short for symbiotic culture of bacteria and yeast), the kombucha-making process is fairly basic. There are several kits available online.

Tapio said he hasn’t noticed any direct health benefits but enjoys drinking kombucha and finds the process “cool and interesting. I’ve interested so many of my friends to it.”

This recipe is reprinted from “Forks Over Knives — The Cookbook,” by Del Sroufe, with desserts by Isa Chandra Moskowitz, copyright Forks Over Knives, LLC, 2012. Reprinted with the permission of The Experiment, LLC.

Place the rice noodles, kimchi, gochujang, and mung bean sprouts in a large bowl and mix well. To serve, divide the mixture between four individual plates and garnish each with the green onions, cucumber slices and sesame seeds.

Notes: kimchi is a fermented condiment made from any number of vegetables. In this recipe, I like to use a very spicy cabbage kimchi, and I recommend you do, too. Taste your kimchi first and use less of it if you want a milder salad, and certainly feel free to add more if you want to give the dish more kick. Kimchi is often made with shellfish or other animal ingredients, so be sure to look for a vegan brand for this recipe. Both kimchi and gochujang (Korean chili paste) are available in the Asian section of grocery stores or online.

Notes: Please purchase a gram scale, if you have not done so already. The precision and consistency in using a scale is essential to the production of pastries and desserts. Measuring cups vary from manufacture to manufacture, so it may only serve as a mere guide to scaling. The recipe calls for 20 g whole egg, this measurement is approximately 40 percent of a whole egg. Crack one whole egg in a small bowl, slightly whisk, and measure to the needed amount. Find a chocolate with a good amount of cocoa butter content. I use a chocolate with a 41 percent cocoa butter content. Recipe by Ramon Perez of Puur Chocolat.

Over a double boiler, melt the chocolate. You may also use a Pyrex bowl, and microwave in 10-15 second intervals until melted.

In a separate saucepan, bring whole milk and cream to low simmer. Pour slowly and gradually into eggs, while whisking. Pouring slowly, and whisking evenly is key so you don’t scramble your eggs. (The sugar in the eggs helps protect the protein)

Add 1/2 the hot egg mixture to the chocolate. Whisk well to create an emulsion. Add the remaining egg mixture in 2 parts. Whisking well between each addition.

Strain through a fine mesh strainer, chill rapidly, and rest in the refrigerator (covered) overnight. I like to rest plastic wrap directly on top of the base so the mixture does not form a “skin.”

In desired cups, or small pots, scale 110 g of base each. Cover each cup individually with plastic wrap, making sure plastic wrap is on tight.

Place cups in a deep, flat bottomed roasting pan and add enough water into the pan to go half way up the cups. Cover tightly with foil.

Place in oven and allow to bake approximately 40 minutes, or until custard is slightly jiggly, but not loose. (Please be careful when checking, as the steam from the water bath will be very hot).

Once fully cooked, remove foil, plastic wrap and cups from hot water bath and place into refrigerator for 1 hour.