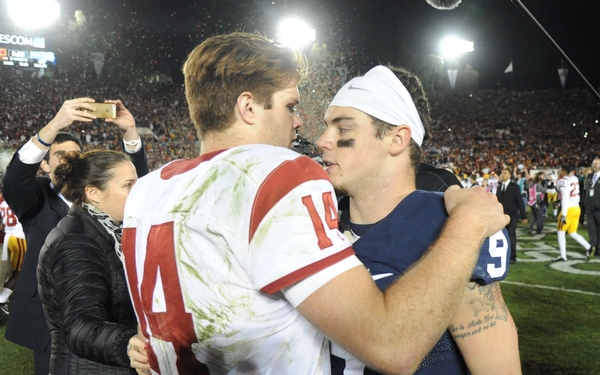 He did not miss a third.

The USC kicker lined up from 46 yards and split the uprights as time expired and the ninth-ranked Trojans defeated fifth-ranked Penn State, 52-49, to win the 103rd Rose Bowl in Pasadena.

Safety Leon McQuay II intercepted a pass by Nittany Lions quarterback Trace McSorley with 38 seconds remaining in the game to set up the game-winning drive.

The Trojans went into halftime leading 27-21, but the Nittany Lions scored three touchdowns in three plays in the third quarter to take a 42-27 lead behind running back Saquon Barkley and receiver Chris Godwin.

Barkley rushed 79 yards for a touchdown, Godwin scored on a 72-yard pass play and McSorley rushed for three yards and a score after Sam Darnold threw an interception.

JuJu Smith-Schuster caught a 13-yard pass for a touchdown on USC’s ensuing possession and coach Clay Helton elected to attempt a two-point conversion. Lining up in a split formation, with several Trojans wide left, Darnold ran right and then passed to tight end Taylor McNamara to make it a one-score game.

McSorley responded when he led an eight-play drive that covered 82 yards and Barkley caught a seven-yard pass for a touchdown. Penn State led, 49-35, at the end of the third quarter.

McSorley was 18-of-29 for 254 yards and four touchdowns, with three interceptions.

The Trojans tied the score, 49-49, when Deontay Burnett caught a 27-yard pass with 1 minute 20 seconds remaining.

Boermeester had previously missed field-goal attempts of 51 and 49 yards, but connected on kicks from 22, 44 and 46 yards.

Darnold completed 33 of 53 passes for 453 yards and five touchdowns, with an interception.

Barkley rushed for 194 yards and two touchdowns in 25 carries. He caught five passes for 55 yards and a touchdown.