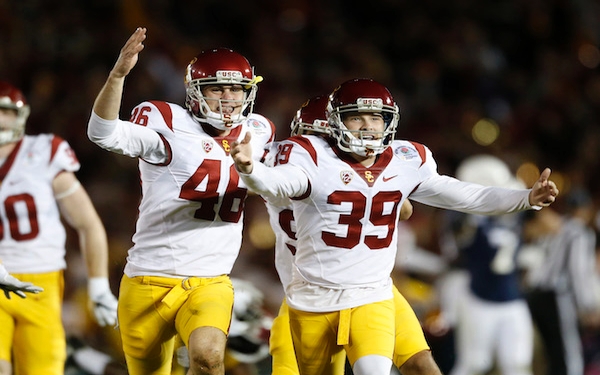 USC Trojans placekicker Matt Boermeester (39) celebrates with teammates after kicking the game-winning field goal against the Penn State in the 4th quarter of the Rose Bowl. (Gary Coronado/LA Times)

USC’s holder, Wyatt Schmidt, knelt at the 36-yard line, alone. A back-and-forth game against Penn State that will go down as one of most exciting in the Rose Bowl’s 103 editions was in its final seconds on Monday evening, and Schmidt was thinking two things.

Get the ball down. Hope Matt Boermeester was right.

When USC held its final walk-through practice Sunday afternoon, Schmidt and long snapper Zach Smith were needling Boermeester, USC’s kicker. This was the junior’s first season in the role, and he hadn’t kicked under pressure. Schmidt and Smith were telling him: You’re going to be kicking the game-winner for the Rose Bowl tomorrow. Are you really up for it?

Boermeester promised that after he made it, he was going to do a dance move, the “dab.”

A day later, Schmidt shook his head and looked around a postgame locker room thick with cigar smoke and champagne, and he laughed: Boermeester was right.

The left-footed kicker’s 46-yard field goal as time expired sent USC’s sideline into hysterics and ended a 52-49 Trojans victory that lasted 4 hours 12 minutes and, somehow, jammed action into every second.

In the fourth quarter alone … USC quarterback Sam Darnold completed 10 of 10 passes and led a three-play, 80-yard drive to the tying touchdown with 1:20 to play; safety Leon McQuay III dropped the biggest interception of his life — then caught one on the very next play, returning it 32 yards to set up Boermeester’s kick; and a stadium staffer carted boxes with USC’s Rose Bowl championship T-shirts onto the field, off the field, then on again as the game swung like a moody teenager.

In the third quarter alone … USC blew a lead and lost cornerback Adoree’ Jackson to an ankle injury; linebacker Cameron Smith was ejected for targeting; and Penn State scored three touchdowns on its first three plays after halftime.

In the first half alone … Penn State receiver Chris Godwin made two circus catches, one for a touchdown; Penn State tight end Mike Gesicki made his own diving catch in the corner of the end zone; and USC still led 27-21 at the break.

The enormity of it all seemed to stun USC coach Clay Helton. Some fans had called for Helton’s job after USC started his first full season 1-3. After Monday’s game, he stood atop confetti with an arm around his son, Turner, his eyes a little wet as he watched the band.

“It felt like a tennis match, just going back and forth and back and forth, the mood swings and the emotion,” Helton said. “It was an amazing game. It’s what fairy tales are made of.”

Penn State coach James Franklin conceded that it “may have been the most exciting Rose Bowl game ever.”

He had a point. Penn State’s Saquon Barkley ran 25 times for 194 yards and two touchdowns and caught a touchdown pass. Darnold passed for 453 yards with one interception and five touchdowns, a Rose Bowl game record. His total yards of 473 set another record, breaking Vince Young’s 467 in 2006 against USC.

Darnold stood near Helton as the band played, and he looked as though he had just awoken from a nap. USC players said they couldn’t remember a time when they’ve seen him rattled.

As he huddled the offense with 1:59 to play, USC down by seven points and 80 yards to go, his voice was calm.

“Sam doesn’t say nothing in the huddle except, ‘Let’s go’ and ‘Here’s the play,’ ” offensive tackle Zach Banner said. “It’s kind of weird, if you think about it.”

It had taken that poise to keep USC from collapsing after Penn State scrapped back from an early 13-0 deficit, then rampaged through the third quarter.

Barkley shook six defenders to race 79 yards for a touchdown. Godwin caught a tipped pass and ran for a 72-yard score. A Darnold interception led to a three-yard TD run by quarterback Trace McSorley. In 33 seconds and 154 yards, Penn State had gained a stranglehold on the game, 42-27.

“It sucks to think about it, but it kind of felt like Alabama,” tailback Justin Davis said, referring to USC’s season-opening 52-6 loss.

Darnold and USC did not break. By the fourth quarter, when USC scored 17 straight points, the defense finally tightened. Linebacker Michael Hutchings corralled Barkley when a first down could’ve ended the game.

It gave Darnold about two minutes to go 80 yards. He needed just 39 seconds. At the Penn State 27-yard line, receiver Deontay Burnett unilaterally decided to scrap his pass route and beeline to the end zone. Darnold saw him and threw a strike. The score was tied at 49.

On the next drive, McQuay dropped a would-be interception on second down. He told himself that if another opportunity came, he wouldn’t waste it. Another one came on the very next play. He did not waste it. He returned the ball to Penn State’s 33-yard line.

After a five-yard run and a Penn State timeout, Boermeester drilled the game-winner. As soon as he kicked it, he turned around, started running and, as promised, did the dance move. His back was turned as the ball went through the uprights.

Afterward, he said he’d envisioned it before it went through. “It was like I’d already been there. I’d seen it in my head already.”

Banner, meanwhile, suggested that this was one of the most important wins in USC history.

“After sanctions, after the NCAA screwed us over, you’ve got to argue that this is the best thing that’s ever happened to USC,” he said. “It brought us back.”