The pomegranate is family tree for budding botanist 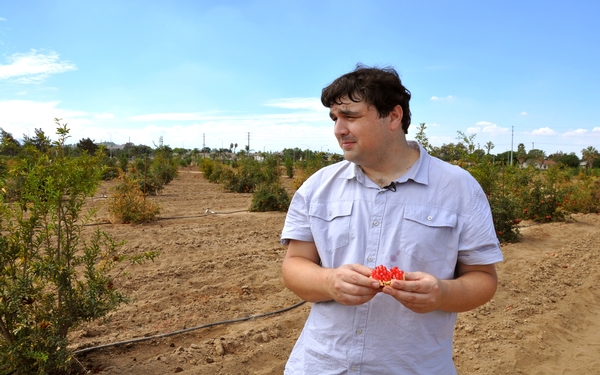 The leathery hull brimmed with dark, translucent seeds bigger than his baby teeth, and when he nibbled them they burst with a sweetness his toddler tongue had never experienced.

After that, no other fruit proffered by his Lebanese grandfather would do. Not his sweet loquats. Not his tart Persian mulberries, carefully tended in a quarter-acre backyard in Camarillo.

“Every time I’d go to my grandfather’s house to visit, I would ask for them,” said Chater, 34, “Because I didn’t understand seasonality back then.”

Chater understands seasonality now in ways that go beyond botany.

A doctoral candidate at the University of California, Riverside’s Department of Botany and Plant Sciences, Chater is cultivating and studying the same pomegranates his grandfather once grew.

Sassin John Chater, it turns out, is responsible for at least a dozen novel types of pomegranate that are loved by the discerning few but remain rare to this day, abandoned in favor of a single variety that goes onto most produce shelves in the U.S., and into juices such as Pom Wonderful.

John Chater, the grandson, is out to change that.

Chater is up against history and billionaires Stewart and Lynda Resnick, whose nut and citrus empire sprawls across 125,000 acres in the San Joaquin Valley.

The U.S. grows about 33,000 acres of pomegranates, nearly all of it the variety called “wonderful,” according to the U.S. Department of Agriculture. The Resnicks own more than a quarter of that acreage, squeezing most of what it bears into hourglass-shaped bottles of Pom Wonderful juice.

The wonderful cultivar has become so central to the Resnicks that they renamed their $4.8 billion holding company, Roll Global, to Wonderful Co. in 2015 and rebranded their packaged nuts and trademarked clementines with the same adjective.

How wonderful rose to prominence, and how the Resnicks came to dominate its cultivation, is a product of chance and savvy marketing.

While some pomegranate trees probably arrived with Spanish missionaries, the wonderful variety was brought here by a man known to history only as “Mr. Baers of Porterville,” who obtained a cutting from Florida in 1896. Within a couple of decades, wonderful was to pomegranates what the Washington navel was to oranges. It has dominated the U.S. market ever since, and has made inroads in Europe and Israel.

If Stewart Resnick had listened to his farm managers, he would have torn out the first 100 acres of wonderful pomegranates that he belatedly realized were part of his 1987 purchase of a pistachio orchard, Lynda Resnick said. Convinced the rare fruit had a higher profit margin than pistachios, Resnick instead planted thousands of additional acres in the ensuing decade — even though marketing reports showed barely 1 in 20 U.S. consumers had ever tried one.

“We weren’t exactly responding to pent-up demand,” Lynda Resnick wrote in her memoir, “Rubies in the Orchard.”

The Resnicks created a market much the way citrus growers dealt with an orange glut in the 1940s: by promising that drinking their fruit juice would extend life spans.

In 2002, the newly launched Pom Wonderful boasted that consumers could “cheat death” with pomegranate juice, loaded with antioxidants. Five years later, the company was bringing in a reported $165 million in revenue — and drawing rebuke from federal regulators. The company has since toned down its claims.

Pom Wonderful is in no hurry to expand beyond the variety that gave the company its name. While the company regularly experiments with other cultivars each year, none match the taste, look, durability and consumer appeal of the original, said Erik Wilkins, the beverage company’s director of crop research.

“We’ve screened some of the material from Mr. Chater,” Wilkins said. “If you try to make pomegranate juice from the kinds of lines that John Chater’s grandfather had over in Camarillo, it has different flavors to it, definitely, but it’s not the traditional flavor that we have from wonderful — it’s still the gold standard.”

Wonderful, he added, “has been part of the California agricultural landscape for over 120 years.”

Sassin Chater wasn’t trying to create the premiere pomegranate. He was honoring memory.

For generations, the Chater family had tended orchards near Beirut, Lebanon, growing olives and other fruit. But pomegranate varieties often don’t adapt well — most thrive better in hot, dry climates of the Middle East and Asia, and will split open or produce bitter arils in the cool and moist Mediterranean climate of Ventura County.

When Sassin Chater tried his luck with a seed from a common variety grown in Lebanon, he got a completely different type of pomegranate — a common occurrence in many domesticated fruits, whose seeds frequently don’t carry genes identical to the parent. This one bore pale red fruit that was unusually sweet, even when still green and the size of a walnut. He named it Eversweet, and obtained a 20-year patent in 1983.

John Chater paid little attention to the hobby of a hospital janitor who could be as gruff as he was kind. Like most teens do, he drifted away from his grandfather. After he left for UC Santa Barbara, he visited his grandparents sporadically, stopping by for the last time only a few months before Sassin Chater died Nov. 6, 2001.

Wandering through a series of post-college jobs at nurseries, Chater began hearing tidbits about his grandfather that suggested he was no ordinary backyard botanist. Small memories began to fit together: strangers dropping by to buy saplings, or to carefully take clippings from the trees. A strange shed in the backyard, stained garnet with pomegranate juice.

It started to nag him that he had never learned his grandfather’s full story, and that it might be too late.

So when a supervisor chided him to stop wasting time clipping roses and get a graduate degree, he applied to a horticulture and crop science graduate program at Cal Poly San Luis Obispo. He talked his way into the exclusive program based less on his grades than his backstory — a former dean at the California Rare Fruit Growers group vouched for the tale. He was accepted provisionally.

“They didn’t have a whole lot of faith in me,” John Chater said. “They were living off this guy’s word.”

His graduate adviser told him there weren’t enough of his grandfather’s trees on the family’s Camarillo property to be able to conduct good science with them. She sent him to Dee Slayman, a longtime pomegranate grower in Kern County, who escorted John Chater to a single row of trees he immediately recognized from his childhood.

“It was so quiet out there in the middle of nowhere with nothing but you, some birds … and the 10- to 12-foot trees bearing these delicious fruit to which nobody on Earth really has access,” John Chater said.

Word got out he was looking for samples of his grandfather’s cultivars. One day, he got a call from Jeff Moersfelder, a researcher at the U.S. Department of Agriculture’s clonal germplasm repository in Davis — a kind of genetic bank and doomsday vault charged with collecting and preserving the nation’s fruit and nut trees.

“He said, ‘I just wanted to let you know we have your grandfather’s pomegranates up here, and if you’re ever interested in visiting, feel free to come up,’” John Chater said. “I didn’t realize they had put his pomegranates in the collection.”

John Preece, a supervisor at the repository, showed Chater an 8-inch by 10-inch poster on the wall. It had a grainy photo of his grandfather in his Camarillo backyard. Around the margins were photos of 13 of the cultivars he had donated to the repository.

John Chater was wide-eyed. They drove out to the nearby Wolfskill Experimental Orchards and followed a map to trees that he again recognized.

He said, ‘Oh, rosa mia — he named that one after my grandmother,” Preece recalled. “I got goosebumps.”

On a recent afternoon in a conference room of Batchelor Hall at UC Riverside, John Chater laid out teal lunch trays with six medicine cups, each filled with arils in colors from pale corn to a bright vermilion. It was time to test whether anyone else felt the same as he did about the fruit of his grandfather’s labor. The samples, masked by random numbers, included the wonderful, a rare Japanese cultivar, three of Sassin Chater’s creations and a new one bred by John Chater.

Chater had planted his grandfather’s varieties when he arrived at the university four years ago, begging his way into the laboratory of Donald Merhaut, whose experience with pomegranates was limited mostly to ornamental varieties. “I told him I’m not really a tree fruit guy,” Merhaut said. “But he has a great story. I like a good story and he has passion.”

The room soon grew quiet, but for the plink of seeds being spit back into cups, and the scratching of pens giving 1 to 10 ratings on sweetness, tartness, the color of the arils, the hardness of the seed and the overall experience.

John Chater paced nervously. “I was up till 3 a.m. opening them up,” he said. “I think I peeled too much.”

In that respect, the “garnet apple” has fallen not far from the tree: Sassin Chater used to sit up late at night on a chair draped with a protective sheet, watching the evening news as he peeled pomegranate after pomegranate, plopping the tender arils into bowls.

John Chater has since found out that his grandfather was squeezing juice from them in that backyard shed, sometimes shipping it in mason jars to distant customers, years before Pom Wonderful came around.

He has not finished analyzing how his grandfather’s pomegranates fared when compared with other varieties. He has a year left to write his dissertation — “Ecophysiological Parameters and Agronomic Traits of 10 Cultivars of Pomegranate,” a fancy name for putting science behind his grandfather’s passion for sharing fruit.

John Chater has no idea what he’ll do next. “It’s been a wandering path,” he said. “I’m trying to straighten it out.”

In an ideal world, he said, he would start a pomegranate breeding program. Or, he joked, maybe he’ll just wind up at the garden section of Orchard Supply Hardware.