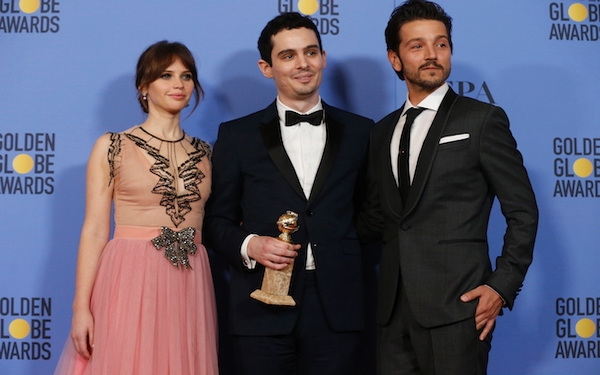 Coming into Sunday night’s Golden Globes ceremony, there were two big questions. Would the awards do anything to dramatically shake up an Oscars race that has been largely dominated thus far by three front-runners: “La La Land,” “Moonlight” and “Manchester by the Sea”?

And would liberal-leaning Hollywood use one of its biggest nights as an opportunity to stake out a position as the loyal opposition to President-elect Donald Trump?

The answers were: No, not really. And yes, very much so.

Perhaps fittingly for an industry that has been trying to console itself in the wake of a presidential election result few saw coming, the 74th Golden Globes, held at the Beverly Hilton, proved a big night for the fizzy romantic musical “La La Land,” a love letter to Hollywood itself that is widely considered the film to beat in this year’s best picture race.

Leading the field with seven nominations, the movie earned seven awards, including the prize for best picture in the musical or comedy category along with wins for director Damien Chazelle, its screenplay and its stars, Ryan Gosling and Emma Stone.

“This is a film for dreamers, and I think hope and creativity are two of the most important things in the world,” Stone said, sharing her award with anyone and everyone striving against the odds to fulfill their dreams of artistic glory.

“Moonlight,” a poetically rendered story of a gay African-American boy coming of age in a poor Miami neighborhood, came into the night with six nominations and claimed one of the biggest awards of the night, taking home best picture in the drama category.

Meanwhile, “Manchester by the Sea,” the wrenching story of an emotionally devastated man who becomes the guardian of his late brother’s son, which had earned five nominations, won just one award, with Casey Affleck taking the prize for lead actor in a drama.

When it comes to the Oscars race, the Globes, which are decided by fewer than 100 members of the Hollywood Foreign Press Association and tend to celebrate popcorn films as much as art-house fare, are not terribly predictive. But if any of the Oscar hopefuls outside this year’s big three — like the interracial love story “Loving,” the crime thriller “Hell or High Water” or Mel Gibson’s World War II epic “Hacksaw Ridge” — were hoping to break away from the pack in the evening’s awards derby, they came away disappointed.

In the biggest surprise of the night on the film side, Aaron Taylor-Johnson earned the prize for supporting actor in a drama for his performance in “Nocturnal Animals.” Coming into the night, Mahershala Ali had been considered all but a lock for his soulful turn as a drug dealer who takes a boy under his wing in “Moonlight,” a performance that has already earned him a raft of critics awards.

French actress Isabelle Huppert won the prize for lead actress in a drama for her performance in the unsettling thriller “Elle,” while Gosling won the award for lead actor in a musical or comedy for his performance as a jazz pianist in “La La Land,” beating out an eclectic field that included a surprise nod for Ryan Reynolds for his role in the raunchy, R-rated superhero hit “Deadpool.”

Delivering one of the most moving acceptance speeches of the night, Gosling thanked his partner, Eva Mendes, for her support while he was making the film. “While I was singing and dancing and playing piano and having one of the best experiences I’ve ever had on a film, my lady was raising our daughter, pregnant with our second and trying to help her brother fight his battle with cancer,” Gosling told the audience.

Viola Davis, considered one of the front-runners for this year’s supporting actress Oscar, earned the award for supporting actress in a drama for her turn in “Fences,” Denzel Washington’s big-screen version of the Pulitzer Prize-winning play by August Wilson.

“It’s not every day that Hollywood thinks of translating a play to the screen,” Davis said, accepting the award. “It doesn’t scream ‘moneymaker.’ But it does scream ‘art.’ It does scream ‘heart.’ ”

Generally one of the loosest — and, not coincidentally, booziest — stops of the awards circuit, the Globes are often an occasion for Hollywood to poke fun at itself. But this year’s Globes found many turning their fire outward, staking a claim for the arts as a means to stand up to the incoming Trump administration.

Accepting the Cecil B. DeMille Award in recognition of her entire illustrious career, Meryl Streep drew some of the biggest cheers of the night when, after nodding to the varied birthplaces of many of the stars in attendance, she said, “Hollywood is crawling with outsiders and foreigners and if we kick them all out, you’ll have nothing to watch but football and mixed martial arts — which are not the arts.”

While genial host Jimmy Fallon treated the crowd with kid gloves compared with last year’s acid-tongued host, Ricky Gervais, he took a jab at the election of Trump with the very first joke of his monologue, calling the Golden Globes “one of the few places left where America still honors the popular vote.”

In a further nod to an election that had come as a shock to Hollywood, Fallon jokingly referred to “Manchester by the Sea” as “the only thing from 2016 that was more depressing than 2016” and compared Trump to the villainous King Joffrey on HBO’s “Game of Thrones.”

But British actor Hugh Laurie, who earned the TV award for supporting actor for his role as an illegal arms dealer in “The Night Manager,” may have had the sharpest Trump-related barbs of the night. In his speech, he darkly cracked that the event could be “the last Golden Globes” (“I don’t mean to be gloomy — it’s just that it has the words ‘Hollywood,’ ‘foreign’ and ‘press’ in it”) and said he was accepting his award “on behalf of psychopathic billionaires everywhere.”

Coming off last year’s Oscar season, which had been marked by often bitter controversy over the lack of nominations for any actors of color, diversity was another running theme of the evening.

The nods to inclusion kicked off with the show’s opening musical number, a buoyant takeoff on “La La Land” in which “The People v. O.J. Simpson” stars Sarah Paulson and Sterling K. Brown rhymed the line “Golden Globes will be given out tonight” with the line “Not all the nominees are white.”

Accepting the award for lead actress in a TV comedy for her performance in “black-ish,” Tracee Ellis Ross — the first black woman to earn the award in that category since Debbie Allen won it 1983 — dedicated her win to “all the women, women of color, and colorful people, whose stories, ideas, thoughts are not always considered worthy and valid and important.”

On the TV side, Amazon and Netflix had strong showings, with the former’s “The Night Manager” picking up three awards and the latter’s “The Crown,” which are both in their inaugural seasons, earning the prize for best drama series. Another newcomer, FX’s “Atlanta,” earned the award for comedy series.

If any one moment summed up the evening — and Hollywood’s emotional state in the midst of the fractious political climate — it was the closing line of Streep’s speech. Choking up, the actress concluded by quoting something her late friend, actress and writer Carrie Fisher, once told her: “Take your broken heart and make it into art.”