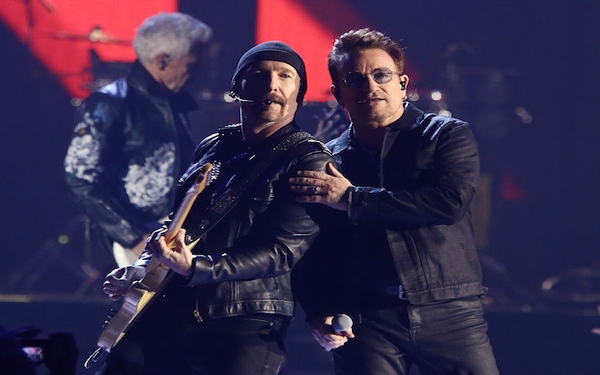 Fans may not appreciate U2 sneaking onto their phones, but they adore the Irish rockers when they come to town on stadium tours. And the band’s new one should have plenty to say about American life at the moment.

The group has announced a full tour to celebrate the 30th anniversary of “The Joshua Tree,” its landmark 1987 album.

U2 will also make its first-ever U.S. festival appearance on this tour, headlining Bonnaroo in June. Tickets for all headline dates go on sale Jan. 17.

U2 will play “The Joshua Tree,” widely regarded as the band’s best, in its entirety, alongside a slate of other hits. The group has, until now, not yet played any of its peak-period albums live in full.

In the liner notes to the album’s 2007 reissue, singer Bono said that at the time, he was inspired by what he saw as two different visions of America.

“Two Americas, the mythic America and the real America — harsh reality alongside the dream,” he wrote. “It was prosperous and it was parched and I began to see this era as a spiritual drought. I started thinking about the desert, and what came together was quite a clear picture of where I was at personally — a little off-kilter in my emotional life but very much waking up as a writer and as a commentator on what I saw around me, my love of America and my fear of what America could become.”

Robert Hilburn, a former Los Angeles Times music critic, once wrote that “The Joshua Tree” was a pivotal step forward for the band.

“From the infectious, cinematic sprawl of ‘Streets’ to the unsettling despair of ‘Running,’ the music challenged, inspired and comforted, and Bono’s lyrics acknowledged going through life’s disillusionment without needing to sacrifice one’s faith,” Hilburn wrote. “‘The Joshua Tree’ may have been the Irish quartet’s finest hour, but every step in their grand journey has been rewarding.”