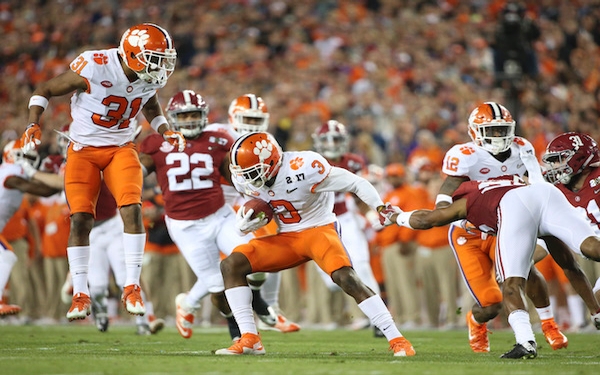 Before the teams met in the College Football Playoff championship game, Clemson Coach Dabo Swinney said only his Tigers were capable of beating Alabama.

Turns out, Swinney was right.

In a remarkable finish, Clemson quarterback Deshaun Watson hit wide receiver Hunter Renfrow on a 2-yard touchdown pass with 1 second remaining Monday to give the Tigers a 35-31 triumph for the national championship.

Watson drove Clemson 68 yards in nine plays in two minutes after Alabama had taken the lead on freshman quarterback Jalen Hurts’ 30-yard touchdown run that appeared to give the Crimson Tide its second straight national title.

But Watson led Clemson on a drive for the ages, and finished the job this season. Clemson fell to the Tide in last year’s title game 45-40 with Watson amassing 478 total yards.

On Monday, Watson passed for 420 yards and rushed for 43.

The Tigers won the second championship in their history by standing up to college football’s strongest force.

The Crimson Tide was gunning for its fifth championship in eight years. Nick Saban looked to join Bear Bryant as the lone coaches with six titles. The quest will have to wait.

The Tigers played from behind all evening but with Watson, Clemson was never out of the game.

On Monday, Watson started slowly but warmed up in the second half. His 4-yard fade to Mike Williams with 14 minutes remaining pulled the Tigers to 24-21.

The game-winning drive started at the Alabama 12 with 6:33 remaining. A 26-yard leaping catch by Mike Williams with an unsportsmanlike-conduct penalty tacked on put the Tigers at the 16.

Watson’s keeper gained 15 yards, and on the next play running back Wayne Gallman powered in from the 1 with 4:38 remaining, and for the first time all season, the Crimson Tide trailed in the fourth quarter.

The Tigers had trailed 14-0, 17-7 and 24-14. But Watson, twice a Heisman Trophy finalist, saved his best moments for the final moments, with the game on the line, against the nation’s best defense.