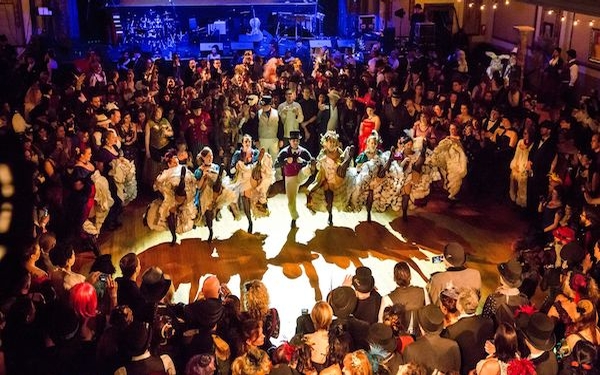 PARADOX Media and Vau de Vire Society announce the 8th Annual Edwardian Ball for Saturday, February 11, 2017 at its new, larger and more luxurious home, the historic Globe Theatre in the heart of the Broadway Downtown Theatre District. As the second of three Edwardian Ball events, hot on the heels of January’s San Francisco Edwardian Ball and before the first-ever Edwardian Ball New Orleans in March, the newly expanded 2017 Edwardian Ball season of events expands its honor, recognition of and artistic contributions from the late-great macabre cult author, comic artist, illustrator and cartoonist Edward Gorey.

Edward Gorey is the ground-breaking, genre–defying and critically-acclaimed graphic novelist who is credited with influencing Charles “Addams Family” Addams, Lemony Snicket, Neil Gaiman (Coraline and Day of the Dead), Rob Reger (Emily the Strange), Alison Bechdel, (Are You My Mother?: A Comic Drama and Fun Home: A Family Tragicomic), and Tim Burton (Nightmare Before Christmas, Edward Scissorhands, and Beetlejuice).

For the uninitiated, The Edwardian Ball presents a unique blend of live music, theatre, fashion, circus, fine art, riveting stage shows, literature, ballroom dancing, DJs, and character play in an enticing and whirlwind alternative universe extravaganza. This multi-city, multi-media exposition of the eccentric and esoteric, long-considered San Francisco’s time-traveling boutique amalgamation of Cirque du Soleil-meets-Mardi Gras, has grown over the past sixteen years from an underground club party into an internationally recognized festival of the arts, drawing attendees from all over the world, operating with the blessing of The Edward Gorey Charitable Trust.

Each year, as part of its extensive entertainment offering, the Edwardian Ball stages a raucously capricious, whimsical, dramatic and climatic theatrical production of an Edward Gorey tale as the centerpiece performance homage to the literary great. This year the living interpretation and celebration of the selected Gorey story revels in the darkest of black comedy and ominous gothic intrigue, suspense, and mystery with the theme of Murder in the presentation of, “The Deadly Blotter;” an unconventional, unusual, intriguing, eccentric and esoteric whodunit, the guidelines of which will be defined and redefined by the attendees, all of whom are either sleuths or suspects in hilarious homicidal hijinks.

Justin Katz, executive producer and co-founder of the Edwardian Ball, states, “This year we present a hat tip to the cinematic murder mystery noir in our presentation of ‘The Deadly Blotter.’ The three Edwardian Ball affairs, staged in three unique and distinctive cities, each sharing the same commonality in cultural magnetism, mysticism, and magical allure, as well as troubled, tragic and tortured pasts, are, in a way, the three parts of a trilogy. Aficionados of the arts, music, literature, and cinema, who relish community participation and a desire to create and perform as Edward Gorey characters in the chapters of their own individualistic plays, will find their home in these darkly gothic, romanticized, gilded and gentile Neo-Victorian and Edwardian-era parties that imagine an alternative distant past which intertwines with an elegantly re-imagined future.”