Los Angeles will be home to George Lucas’ $1 billion museum 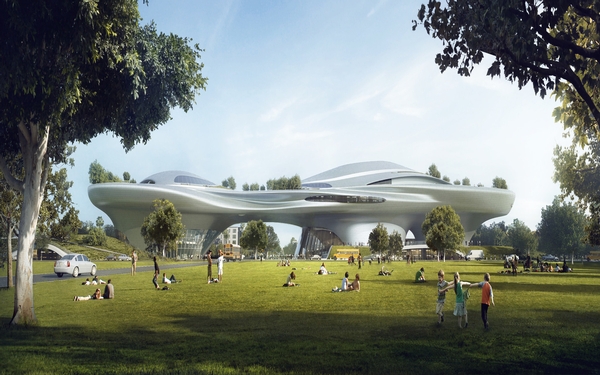 The suspense has been as epic as “Star Wars,” but after months of intense speculation, George Lucas’ Museum of Narrative Art on Tuesday chose Los Angeles as its home over San Francisco.

The filmmaker’s personal collection of fine and popular art, including ephemera related to his “Star Wars” franchise, will fill a futuristic new museum in L.A.’s Exposition Park, which beat out a competing plan on Treasure Island in San Francisco Bay. The rivalry had pitted two cities in the competition not only for Lucas’ collection and the tourism it will bring, but also for the thousands of jobs that backers say it will create.

Lucas has said he will fund the project to the tune of about $1 billion, including building costs, his art and an endowment of at least $400 million.

“It feels like this incredible gift has come home. I always thought Los Angeles was the natural place to spread the vision of George Lucas and Mellody Hobson, to make art and creativity accessible and inspirational to the next generation,” Mayor Eric Garcetti said of the filmmaker and his wife. “It’s a natural place to have this museum in the creative capital of the world and in the geographic center of the city. It’s a banner day for L.A.”

Garcetti said the museum will create tens of thousands of jobs in construction, and he estimated the number of permanent jobs created by museum at more than a thousand — “and that’s a lowball estimate.”

“People will visit from around the world to see the original Darth Vader mask and Norman Rockwell paintings,” he said.

Lucas, 72, has spent about 10 years trying to erect a museum for his art collection, which consists of about 10,000 paintings and illustrations including works by Norman Rockwell, N.C. Wyeth and R. Crumb, along with Hollywood memorabilia from films such as “Star Wars” and “The Ten Commandments.” In 2010, he set his sights on his home turf of San Francisco, but faced community opposition from San Francisco’s Presidio Trust about building in the historic park. Lucas then aimed for Chicago, Hobson’s hometown, but encountered resistance from Friends of the Parks about the downtown site along Lake Michigan.

The newest proposals, both featuring designs by Chinese architect Ma Yansong, were aesthetically similar but seemingly opposites in other respects. One was a remote, four-acre site on a breezy island in the middle of San Francisco Bay, beautiful but accessible only by bridge and ferry; the other was a seven-acre location in public transit-friendly, museum-heavy Exposition Park near Lucas’ alma matter, the University of Southern California.

Lucas declined to comment for this article, but he chose L.A. largely because Exposition Park positions the museum to “have the greatest impact on the broader community, fulfilling our goal of inspiring, engaging and educating a broad and diverse visitorship,” the board announcement said.

“Settling on a location proved to be an extremely difficult decision precisely because of the desirability of both sites and cities.”

The board called Exposition Park “a magnet for the region and accessible from all parts of the city.”

“As a museum uniquely focused on narrative art, we look forward to becoming part of a dynamic museum community, surrounded by more than 100 elementary and high schools, one of the country’s leading universities as well as three other world-class museums.”

Art historian Don Bacigalupi will serve as founding president of the museum.