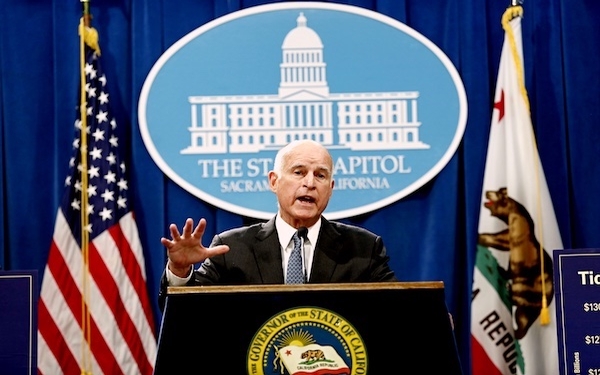 Less than four years after declaring California’s budget balanced for the foreseeable future, Gov. Jerry Brown on Tuesday said the state is projected to run a $1.6-billion deficit by next summer — a noticeable shift in the state’s fiscal stability that could worsen under federal spending cuts championed by President-elect Donald Trump.

“The trajectory of revenue growth is declining,” said Brown in unveiling his $179.5-billion plan for the fiscal year that begins in July.

The governor’s sober assessment comes on the heels of several months of lagging tax revenue collections, a small but impactful change that could stifle the plans of his fellow Democrats in the Legislature and give fuel to Republicans’ demands to impose additional cuts.

Brown’s budget advisers lowered the official tax revenue forecast, in part, because of slower than expected growth in wages. They also reduced expectations for sales and corporate taxes because of broader national trends.

Brown proposed to address the deficit primarily through slowing the growth in spending on public schools by $1.7 billion, a change that brings funding down to the minimum required by formulas enshrined in California’s Constitution. The governor also proposed scrapping $1.5 billion worth of spending ideas left over from last year’s budget negotiations, including higher subsidies for child care programs and awarding new college scholarships to California students from middle-class families.

“To manage unreliability requires prudence,” Brown said of his decisions to address the projected budget shortfall.

The governor’s fiscal blueprint is the ceremonial first pitch in Sacramento’s annual budget writing season, and, as such, is likely to shift in its detailed ways to address fiscal pressures faced by the state. No change could be more dramatic than the fate of some $105 billion in expected federal funds, stretched across a variety of services.

The most consequential of those is the $16.1-billion subsidy for Medi-Cal, the program offering health care to the state’s most needy, provided through the Affordable Care Act. Those funds have helped the state add more than 3.8 million people to the Medi-Cal system, a network of providers that reaches one in every three Californians.

Republican leaders in Congress and the president-elect have vowed to repeal the law championed by President Barack Obama, though they have yet to identify when or how that will happen. That uncertainty is why Brown’s new budget plan does not officially lay out a path forward, though the governor made it clear on Tuesday that he thinks GOP leaders should rethink their political promises in regard to Obamacare.

“That’s very bold and, I think, a move that isn’t very consistent with decency,” the governor said Tuesday.

He also offered national leaders some advice as they weigh the merits of various federal subsidies.

“I don’t think this country needs any more divisive kinds of moves that divide the poor and the rich, split the middle class and all those other things that will be the result if the rhetorical thrust, as suggested in the last few weeks, becomes the operational reality in Washington,” Brown said.

But the governor offered a flash of his own version of audacious politics in asking legislators to approve an extension of California’s system for buying and trading greenhouse gas pollution credits. That cap-and-trade program faces an uncertain future beyond 2020, as business groups have challenged its legality in court.

On Tuesday, Brown proposed that the Legislature officially reauthorize the program — which would require a supermajority vote in both houses — and hinted that he might otherwise block the spending of $2.2 billion in proceeds from the auctions of those credits.

“Given the fact that the federal government is going in the opposite direction,” Brown said of the climate change debate, “I would think that Californians want to strengthen their own commitment.”

Advocates for social services, though, saw the budget plan as lacking any new strength for the state’s most needy.

“This is just a very conservative budget that really doesn’t do anything to reduce poverty in the state of California,” said Mike Herald of the Western Center on Law and Poverty, who pointed to a lack of new money for welfare assistance efforts or affordable housing.

Democrats, in general, sounded positive notes about the governor’s proposal. One key source of early criticism, though, was his plan to phase out the scholarships offered to middle-class students attending University of California and California State University campuses. The budget proposes to renew scholarships for 37,000 current recipients, but offers no new assistance beyond that.

“We must work to keep college affordable for California students” he said, “and I will not support burdening them with higher fees and greater student debt.”

In all, Brown’s budget continues a long trend toward allowing additional spending while restraining the political desires of Democrats to do more. And while it doesn’t spell out a specific need to respond to changes pushed by Trump and congressional Republicans that are on the horizon, the governor made clear that all budget decisions in Sacramento are in some way subject to the national debate.