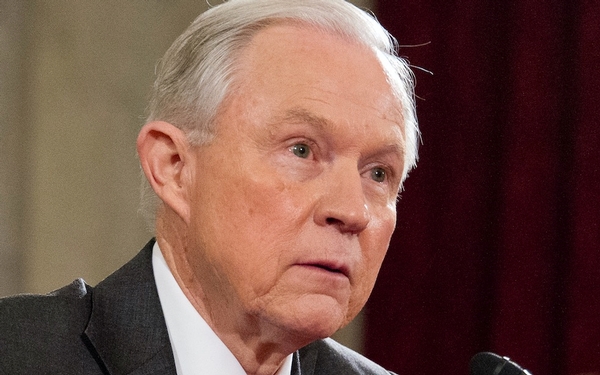 Sen. Jeff Sessions forcefully defended his civil rights record Tuesday and pledged, if confirmed as the nation’s next attorney general, to put aside his personal views and uphold laws protecting abortion and same-sex marriage.

The daylong confirmation hearing was a mostly collegial affair with fellow senators politely prodding the 70-year-old former federal prosecutor to explain his record on issues ranging from torture to immigration.

As a longtime member of the committee now reviewing his expected nomination to become the nation’s top law enforcement officer, Sessions has sat on the opposite side of the witness table for five previous confirmation hearings for attorney general candidates.

So it’s no surprise that the seasoned Alabama lawmaker avoided any self-inflicted wounds during his testimony, keeping his composure amid questioning and periodic disruptions from protesters in the audience.

When pressed on his opposition to abortion and same-sex marriage, for example, the conservative senator told Democratic colleagues that both issues had been settled by the Supreme Court and that he would abide by those decisions. Similarly, on the use of waterboarding against terrorism suspects, which Sessions has previously supported, he said Congress had clearly outlawed the practice.

Session began his testimony by offering his most strident defense yet of allegations that as a U.S. attorney in the 1980s he had improperly targeted civil rights advocates for prosecution on voter fraud charges and had made racially insensitive comments about the Ku Klux Klan and minorities.

“These are damnably false charges,” Sessions said, adding that he “did not harbor the race-based animosities I am accused of. I did not.”

Those accusations, made by fellow Justice Department attorneys at the time, helped torpedo Sessions’ 1986 nomination by President Ronald Reagan to become a federal judge.

“There was an organized effort to caricature me as something that wasn’t true,” he said. “It was very painful. I didn’t know how to respond and didn’t respond very well. I hope my tenure in this body has shown you that the caricature that was created of me was not accurate. It wasn’t accurate then and it’s not accurate now.”

Sessions is again being assailed by civil rights groups, who point to his Senate record of voting against hate-crime legislation, immigration reform and efforts to ban torture as evidence that he would not fairly enforce the laws protecting minorities.

Sessions testified he hoped to work closely with local police and would aggressively combat gun violence, gang crimes and drug trafficking. He said he felt criticism of police misconduct should be “narrowly focused on the right basis” because too often mistakes are used to “to smear whole departments” and that “places those officers at greater risk.”

The senator did not stray from his previous long-held hard-line views on immigration enforcement, testifying he would aggressively “prosecute those who repeatedly violate our borders” and support rescinding an Obama administration program that deferred deportation of hundreds of thousands of so-called Dreamers, those brought to the country illegally as children.

“It is very questionable constitutionally,” Sessions said of Obama’s 2012 Deferred Action for Childhood Arrivals program. He did not say whether he believed the 742,000 immigrants protected under the program should be deported.

An unabashed opponent of marijuana use, Sessions was non-committal about whether he might use his authority to resume raids of marijuana-growing operations and dispensaries. Such law enforcement actions, deeply unpopular in states like California and Colorado, were effectively halted in recent years.

On counter-terrorism, Sessions said he would fight the “scourge of radical Islam” and believed that the U.S. military prison at Guantanamo Bay, Cuba, should continue to house terror suspects. President Barack Obama was unable to fulfill his pledge to close the detention facility, which still holds 55 detainees, 19 of whom have been cleared for release.

Sessions added that he not support “the idea that Muslims as a religious group should be denied admissions to the United States,” a position Trump once backed.

The hearing is scheduled to continue Wednesday with a long list of witnesses, including Democratic Sen. Cory Booker, who said he will take the unprecedented step of opposing a fellow senator’s candidacy for a Cabinet job.

Sessions was the first of Trump’s Cabinet contenders to begin what is expected to be a combative confirmation process over the next few weeks.

Sessions, one of the most conservative members of Congress, is widely expected to win confirmation from his colleagues in the Republican-controlled Senate. No sitting U.S. senator has ever been rejected for a Cabinet position, and GOP senators on the committee offered nothing but unstinting support on Tuesday.

Even so, Sessions has a long and complicated history on racial matters, and the toughest questions posed by senators focused on how he would deal with civil rights laws, hate crimes and access to the polls.

Sen. Dianne Feinstein, the ranking Democrat on the committee, set a tough tone by saying that since the election, many citizens have expressed “deep anxiety about the direction of this country and whether this nominee will enforce the law fairly, evenly and without personal bias.”

“Today we are not being asked to evaluate him as a senator,” the California senator said, acknowledging that many of her Democratic colleagues like Sessions personally and professionally. “Will he be independent of the White House? Will he tell the president ‘no’ when necessary?”

Sen. Al Franken, D-Minn., grew testy when questioning Sessions about several civil-rights lawsuits Sessions had listed on his Senate questionnaire as examples of “significant” cases that Sessions personally litigated during his career.

The Trump transition team later said that the cases were worthy of being mentioned, even though Sessions had not been actively involved in them.

Franken suggested that the Trump campaign or Sessions were trying to inflate his civil rights accomplishments.

Sessions replied that he had listed the cases because they were “historic” that they “were the kind of cases that were national in scope, and deserved be listed on the form.”

The would-be attorney general waded into many of controversial issues that have long dogged the Justice Department, including whether it should re-open its investigation into Clinton’s use of a private email server while serving as secretary of State. The FBI and Justice Department decided that criminal charges were not warranted despite having determined that Clinton and her aides unintentionally sent classified information over the system.

During the campaign, Trump said he would appoint a special prosecutor to investigate the matter but has since backed off that pledge.

Sessions, the first senator to endorse Trump’s presidential bid, said he would recuse himself from any Clinton-related matters because he had often attacked her on the campaign trail.

Sen. Lindsey Graham, R-S.C., asked whether Sessions believed Russia was behind the hacks of the Democratic National Committee and Clinton campaign chairman John Podesta. Emails hacked from the DNC and Podesta’s email account disrupted the Clinton campaign, and the intelligence community and the FBI have concluded that the cyber attacks were ordered by high-ranking Russian officials with the goal of hurting Clinton and helping Trump.

Sessions said he had not been briefed on the investigation but has “no reason to doubt” the findings. As attorney general, Sessions would play a large role in helping decide how to respond to such an attack during Trump’s tenure.

“When a nation uses their improperly gained … information to take policy positions that impact another nation’s democracy or their approach to any issue, then that raises real serious matters,” Sessions said.

Trump, by contrast, has questioned the intelligence findings and dismissed claims of the Russian hack as an effort to delegitimize his election.

Sessions sidestepped questions about whether he would recuse himself from any investigations involving Russia and the Trump campaign, saying he had not publicly commented on that and would review any such case to determine whether “it should stay within the jurisdiction of the attorney general or not.”