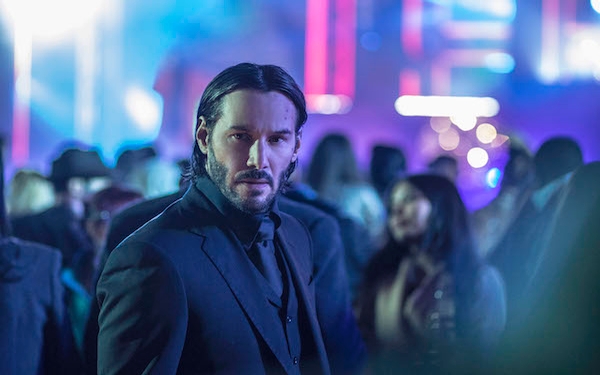 From the first flurries of franchises in January through the last gasp at Oscar-qualifying runs in December, there will be, conservatively, around 300 films released in 2017. For the purposes of this preview, The Times’ film writers and reporters chose to write about the movies they were most excited to see in the year to come. So in chronological order …

No one expected much from the first “John Wick.” Looking at the cast list and synopsis, it looked as if it could’ve been the kind of action-thriller that airs Sunday night at 11 on some basic-cable network: Keanu Reeves plays the shadowy title figure, who kicks off a revenge spree after Russian thugs kill his dog.

And, yes, that is pretty much what “John Wick” is. It is also the kind of grindhouse, exploitation fun that Hollywood doesn’t make any more, executed with style and verve by directors Stahelski and David Leitch — themselves stuntmen, fight choreographers and second-unit directors making the leap to the big chair. “John Wick” made $86 million worldwide off an estimated $20 million budget. With that kind of math, you get a sequel.

This time around, it doesn’t seem that a puppy needs to die to prompt Wick — again played by Reeves like a world-weary Neo, able to work ballistic miracles with a gun in his hand — to commit mayhem. And anyone who grew up on the action cinema of the ‘80s and ‘90s is already in line for popcorn. —Marc Bernardin

Comedy star Peele (“Key and Peele,” “Keanu”) makes the leap to horror — and goes behind the camera — with this Blumhouse thriller with a frighteningly resonant premise: Chris (Kaluuya), an African American man, and his white girlfriend Rose (Williams) pay a weekend visit to her family in the suburbs, where he discovers insidious shenanigans targeting the black residents of her very idyllic, very Caucasian hometown.

Peele (who also wrote the script) updates the simmering suburban paranoia of “The Stepford Wives” into a 21st century nightmare in which micro-aggressions are murder on more than just your nerves — and all too familiar in today’s still-divided America. Keener and Whitford costar as the parents whose discomfort over their daughter’s new romance might just belie something more sinister, while up-and-comer Stanfield (“Straight Outta Compton”) pops up as a fellow visitor with a smile on his face and panic in his eyes.

Peele’s genre debut comes loaded with social commentary and opens during Black History Month — and judging from the reaction to its sharply entertaining first trailer, could spark a new subgenre of close-to-home horror thrusting interracial and class tensions into the pop culture conversation. —Jen Yamato

Let’s be real, a live-action “Beauty and the Beast” with full-on musical soliloquies is a bold idea. But the thought of Watson as Belle running up a hill belting out, “I want adventure in the great wild somewhere,” hits right in that sweet nostalgia spot, hard.

There is absolutely no way a live-action film about singing household objects and a young woman falling in love with what appears to be a furry minotaur, and yet we’re curious. Deadly curious. The chances of finding one member of this office sitting front row full-on cry-singing through “Bonjour” one minute and then uncomfortably squinting at Stevens’ interpretation of the Beast is high. Why? Because the cast reads like it came straight out of the Internet’s dream journal.

Watson and Stevens play the leads while McGregor was cast as the candlestick Lumiere, McKellen is the clock Cogsworth and Emma Thompson is the teakettle Mrs. Potts. Early standouts Evans as the egomaniacal villain Gaston and his lackey Le Fou played by Gad are already creating plenty of buzz when the two started singing from their Instagram accounts.

It feels like Disney has been ramping up to this feature film for years, first with the song-free live adaptation of “Cinderella” in 2015 followed by Jon Favreau’s “Jungle Book,” which trotted out a few familiar tunes from the animated classic. But this “Beauty and the Beast” adaptation feels less like another artist’s interpretation but an homage to the past. —Meredith Woerner

The last 16 years have been one epic globe-trotting roller coaster for Dominic Toretto (Diesel) and his motley gang of streetwise racers-turned-international operatives. Such is life when you live a quarter-mile at a time.

But after emotionally eulogizing their beloved late co-star Paul Walker in 2015’s seventh “Fast and Furious” installment, the high-octane saga of this multicultural new-millennium familia drifts into soapy high-action drama with a shocking twist: Just as the crew is settling into new normal lives, along vrooms a villainous Theron to seduce Dom away from his honeymoon and over to the dark side.

Will Dom’s crew ride or will they die to bring their brooding leader back while battling an anarchist bent on igniting global chaos? How many Coronas will be spilled as unexpected betrayals and alliances rock Universal’s hit franchise? —J.Y.

It hasn’t always been easy being a fan of the “Alien” franchise. Launched in 1979 with Scott’s masterpiece, the series has soldiered on for four decades through various follow-ups and Predator-battling spinoffs that have occasionally hit the mark (James Cameron’s “Aliens” comes to mind) but often proved disappointing.

The most recent installment, 2012’s prequel “Prometheus,” grossed more than $400 million worldwide, but critics and audiences were divided on the film, with some finding it ponderous. (In space no one can hear you scream, but on the Internet everyone can hear your bellyaching.)

Now, to the delight of longtime fans, Scott appears to be bringing the series back to its horrifying roots. In “Alien: Covenant,” the crew of a colony ship, en route to a distant planet, finds what they at first think is an undiscovered paradise, only to realize that it is inhabited — surprise! — by the titular monstrous xenomorphs.

At 79, Scott still makes movies with the hard-charging intensity of someone a third his age, and the idea of him going back to the spine-chilling core of one of his greatest films — well, it’s enough to make your heart nearly burst out of your chest. —Josh Rottenberg

In the oversaturated market of bros in capes, it’s high time a woman punched her mighty fist through the countless waves of male-centric superhero movies. All the world’s waiting for the “Wonder Woman” movie not only because this will be the first female-led superhero movie since 1984’s “Supergirl” but also because the character Diana Prince (a.k.a. Wonder Woman, played here by Gadot) is fire.

The daughter of a god, Wonder Woman is a warrior who carries her sword in the back of a ballgown and deflects bullets with her bracelets. More importantly, she considers it her sacred duty to defend the world. She’s driven by love and justice, so while Batman is sulking in his cave, Diana is out in the trenches getting things done.

In the film, Diana will leave her idyllic homeland (populated by fierce actresses like Wright and Connie Nielsen) to help the Allies in World War I.

The icing on the cake? The film is directed by Jenkins from the 2003 gut-kick of a film “Monster.” It’s a collection of great talent both in front of and behind the camera, so fingers crossed for “Wonder Woman,” because it’s about damn time. —M.W.

There are lots of reasons fans were thrilled by 2016’s “Captain America: Civil War,” but high on that list was “Holy crap, is that Spider-Man?! And he’s a teenager?! And he sounds like he’s from Queens?!”

With that extended cameo, Marvel head honcho Kevin Fiege erased the Andrew Garfield-led “Spider-Man” movies from memory and set the table for a new version of the old webslinger, one who had goofy-boy-genius bursting from his red-and-blue seams.

“Homecoming” finds Peter Parker in high school navigating the whims and whimsies of an adolescent life — bullies, homework, girls, supervillains — while dealing with the extracurricular responsibilities that come with being “Avengers”-adjacent.

First off, it’s the source of our favorite stupid movie rumor of all time, which had Nolan spending $5 million of Warner Bros.’ money to buy a vintage Nazi war plane, outfit it with an Imax camera and then spectacularly crash it for a scene in this upcoming World War II epic.

History buffs can also rest easy as Warner Bros. assures us that no priceless airplanes were harmed during the making of this film — though many were in fact used to tell the true story of the massive, miraculous evacuation of Allied soldiers from the beaches of Dunkirk, France, in the early days of the war.

It’s Nolan’s first foray into history and, as you’d expect from the guy who made “Interstellar,” “Inception” and “The Dark Knight” trilogy, it’s going to be ambitious, extravagant and, yes, set to a bombastic, eardrum-rattling score by composer Hans Zimmer.

There are no half-measures with Nolan, which, given the subject matter, will be entirely appropriate this time around. The 1940 Dunkirk rescue turned what Winston Churchill called a “colossal military disaster” into a “miracle of deliverance.” Shooting with both Imax and 65mm film cameras, expect Nolan’s “Dunkirk” to capture every inch of the rescue’s horror and triumph. —Glenn Whipp

Stephen King fans have a big summer ahead. Elba stars as Roland Deschain, a lone gunslinger-knight on a quest to save his world by reaching the titular spire that stands at the nexus of time and space. McConaughey goes evil as the Man in Black, a power-hungry sorcerer with his own nefarious designs on harnessing the tower’s potential.

Hollywood has been attempting to adapt King’s ambitious eight-novel lit series for a decade now; over the years the bestselling science-fiction horror-western property has been developed by the likes of J.J. Abrams and Ron Howard.

This summer we’ll see if Sony Pictures and MRC have done the near impossible with Danish director Nikolaj Arcel (the Oscar-nominated “A Royal Affair”) at the helm: Adapting King’s celebrated genre-blending magnum opus into a feature film that not only brings the books to life but also whets appetites for a planned 2018 TV spinoff series set to explore the saga’s backstory. —J.Y.

Initially met with mixed reviews, Ridley Scott’s 1982 “Blade Runner,” adapted from Philip K. Dick’s 1968 novel “Do Androids Dream of Electric Sheep?” has gone on to become a stone-cold sci-fi classic. A visually stunning, emotionally haunting rendering of an all-too-plausible dystopian future, the neo-noir tale of a cop (Ford) who hunts down renegade androids has cast a vast influence over the pop culture landscape, from movies like “The Fifth Element” and “The Matrix” to TV series like “Battlestar Galactica” and “Westworld.”

While the idea of a follow-up has been kicking around for nearly 20 years, many doubted the magic of the original could ever be recaptured, assuming any attempt at a sequel would be just a pale replica (or replicant) of the original. But as the pieces have come together — with Ford stepping back into his iconic role as Rick Deckard and Villeneuve, who directed the moody, cerebral sci-fi hit “Arrival,” at the helm — anticipation has steadily mounted.

Set three decades after the events of original film, “Blade Runner 2049” centers on a young LAPD blade runner (Gosling) who uncovers a secret that leads him on a quest to find Deckard, who has been missing for 30 years. If you consider yourself a sci-fi fan and that doesn’t get you excited, you should probably submit yourself to a Voight-Kampff test to make sure you’re really human. —J.R.

Special Features
Digital theater is all the rage, but could it destroy the live stage?
567 views

Special Features
Oscars 2020: Who will win and who should win
926 views

Special Features
Secret screenings. Redacted scripts. How they make the twists in ‘This Is Us’
388 views