‘Trainspotting’ reunion: Two decades later, Renton, Sick Boy and the rest of Scottish gang are back 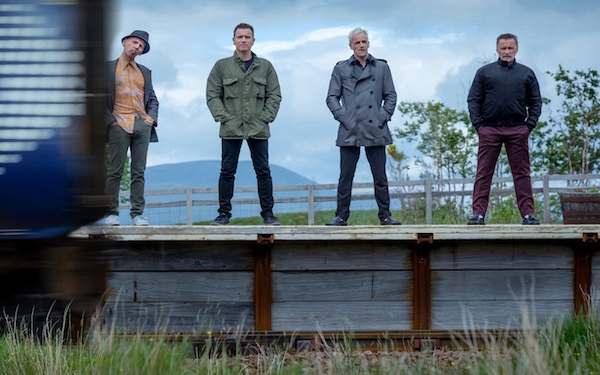 It wasn’t long after “Trainspotting” came out in 1996 that the movie began to epitomize an era.

Directed by Danny Boyle and written by John Hodge (from a book by Irvine Welsh), the film captured the growing consumerism, heroin-chic and Cool Britannia of the time. There were numerous memorable scenes (upside-down babies, heinous bar bathrooms), kinetic edits, indelible monologues (Choose Life! Colonized by Wankers!) and that raw uptempo soundtrack. As it followed the exploits of Renton, Sick Boy and other on-the-margin types in Edinburgh, “Trainspotting” took on landmark status.

The film, of course, also launched the careers of Ewan McGregor and Jonny Lee Miller — not to mention Boyle, years ahead of “Slumdog Millionaire,” “127 Hours” and his reputation for slick sizzle.

So why, two decades later, are Boyle and Hodge returning with a sequel, “T2: Trainspotting,” out March 3? Isn’t it like that awkward high school reunion, everyone looking a little different, no one truly wanting to be here? The Times talked with Hodge and Boyle to get answers.

What made you decide to try again?  I think the biggest reason was that Danny reached out to the four actors and said, in principal, “If John writes a script, would you do it?” And they all said yes — they all had to say yes. And then the pressure was on.

How do you make that gang grow up when the whole point of the first movie is that they don’t want to grow up? How did you deal with that?  I don’t want to give away too much, but I think that was the challenge and the appeal. What are these guys like 20 years on? Like all of us, we change a lot over 20 years, but bits of us remain the same. I think the fact that so much time had passed also liberates the movie. If it was just five years later, we’d just expect more of the same — they’re just going to rob a casino in Monaco. Now, people expect things to be different, for a lot of life to be lived.

The world has changed a lot too — that consumer culture at hyper-speed has gotten even faster. And, of course, technology has entered the picture.  I think we saw an opportunity there — to show how consumer culture has been inflated and employment is less secure and corporations even more powerful. This movie has become more topical since 1996. It’s become more topical since we started writing it.

Did you ever think you’d be making any sequel, let alone to “Trainspotting”?  I can’t say I did. Even when we were talking about it. But one of the big reasons is I’d just run into people and hear the way they talk about characters. They still remember their names. When does that happen? I can’t remember Jennifer Lawrence’s character’s name in “Passengers,” and I saw that yesterday.

That active filmmaking style you used then was so unique. Now it’s commonplace. How do you match that? Or do you not even try?  That’s the tension. If the soundtrack and the style don’t live up to what you had then, it will disappoint people. But it’s also 20 years later, and the boys are not running around like they used to.

John said this all began when you reached out to the four actors. Was that a tough call to make — “Hey, remember this thing that made your careers? Come and try to top that.”  (Laughs) Actually, I think they were all fine in theory. In practice, I knew if the script didn’t deal with them equally, like the first one, they wouldn’t do it. So then we had to come up with a movie that did that and also wasn’t … bad. Then there’s the prism of aging, which is terrifying for a lot of us but really terrifying for actors. You remember them frozen in time, and suddenly they’re in the present.

Which is also part of the appeal — we get to not only to imagine how characters turned out but also actually see that in front of us.  When we first started making this film, I thought the subject was time. And that the reason we didn’t make it 10 years ago is because the actors didn’t look like they’d aged enough. Or I wasn’t old enough. (Boyle recently turned 60.) And I realized after making this film it isn’t about time — it’s about masculinity, about disappointed masculinity. When we made the first film, everyone said it was about drugs, and I said it was about friendship. But I realize now it was really about boyhood. And this is about manhood.

It’s funny you use the word “boyhood.” I can’t help feeling there’s something Richard Linklater-ish about this. Like “Boyhood” or even the “Before” films, we get to check in to see how characters have — or haven’t — matured.  Movies have this weird Hollywoodizing effect, this glamorizing effect, even gritty films like “Trainspotting.” It makes people desirable by freezing them. And if you’re lucky, as we were, you get a chance to unfreeze them — sometimes literally, even, by dropping pieces of the first movie in. You get the past and present simultaneously. And that’s a rare, powerful thing.