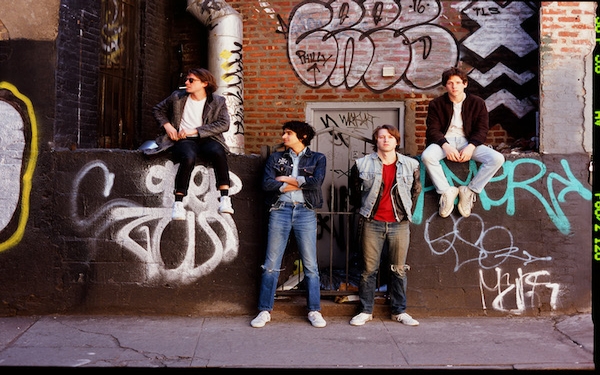 John Eatherly — the singer, guitarist and songwriter in power-pop upstarts Public Access T.V. — had big dreams when he was a kid, dreams that could only be fulfilled by dropping out of high school in small-town Tennessee and moving to New York City.

“If I was going to start a band from scratch, I wouldn’t recommend Manhattan,” he says. “We’re just surviving in some ways, but I wouldn’t change any of it.”

For as long as he can remember, Eatherly couldn’t shake the idea of living in the city that gave rock ‘n’ roll everyone from the Velvet Underground to the Strokes. Even when his Manhattan apartment burned down in 2015 and he lost all his possessions, he hung tough. These days, he and his bandmates live on the same block in the borough.

It’s quite a change from his boyhood in Pegram, Tenn., population 2,000, outside Nashville. Though he’d played in various bands since his early teens, Public Access T.V. is the first band in which he’s had pretty much total creative control. Though bassist Max Peebles, guitarist Xan Aird and drummer Peter Sustarsic contribute mightily to the band’s sound, Eatherly’s songs set it apart. He favors classic verse-chorus-bridge craftsmanship that puts a premium on melody and tight, taut arrangements.

“It’s meant to be a little tongue in cheek … (addressing) that idea of ‘Do you guys think you’re carrying the torch for rock ‘n’ roll into a new era?’” the songwriter says. “That makes me laugh, because this is what I’ve always done. It never occurred to me to do anything else but play on guitars with drums and bass.”

Eatherly says he didn’t really start thinking about where the band fits in until journalists started asking him about it: “I see now that’s not necessarily a wave that we’ve landed in, to be playing guitar music.”

His roots in classic songcraft run deep. The singer’s family had moved to Tennessee from Texas in the ‘70s, as his father aimed to forge a career as a songwriter in Nashville. “I have early memories of my dad working in the basement, having people over to write,” he says. “There was always a guitar around, and a drum kit after my parents realized I was an angry child and needed something to beat on after school.”

He shied away from considering music as a career, though, especially after watching his father’s struggles. “He was always chasing success and not having it, trying different things and not having his own voice,” he says. “That killed his mojo a little bit. He passed away when I was 17. I don’t think he liked country music, but he moved to Nashville to try that, be a songwriter and make money, and it didn’t work out.”

Yet when a friend in the indie band Be Your Own Pet invited Eatherly to join a European tour on drums, wanderlust took over and at 16 the singer dropped out of high school and began dedicating himself full time to music. Be Your Own Pet broke up in 2008, and that same year Eatherly moved north, eventually settling in Manhattan in 2010 with his Nashville friend Peebles. He recorded or toured with bands such as Fiery Furnaces, the Smith Westerns and the Virgins, and was able to piece together a living, all the while writing songs for what would become Public Access T.V.

He floated one of his songs, “Monaco,” on the internet in January 2014, and it was praised by the tastemaker magazine NME in England. He quickly got an offer to play a show in New York and accepted. There was only one problem: He still didn’t have a band.

“I knew I wanted to play with Max and Xan, but we had never rehearsed as a band,” he says. “I didn’t have a drummer. We booked a show at (Manhattan club) Niagara, and we had no expectations of anyone being there. But it was crazy, fully packed, people couldn’t get in. It was definitely a vibe, and it felt good, rewarding and weird. We were kind of high on this idea that we were pulling a fast one.”

Public Access T.V. was soon signed to a major label in England, but Eatherly never meshed with the label bosses while releasing a couple of EPs. There was an up side, though: “They paid for us to become a band and live for a couple years, and made it so I could wrangle in the people I wanted in the band, and keep it functioning.”

“Never Enough” emerged as a kind of Eatherly best-of with songs dating from when he arrived in New York, and represents an affirmation of why he moved there in the first place. “It’s this accumulation of songs and friends that goes back six years,” he says. “All of the stuff I’d been doing outside of that had been so unpredictable. But with Public Access T.V. I feel a little more in control of my life, and I have a little more peace of mind.”