Keaton fascinating as Kroc in ‘The Founder’ 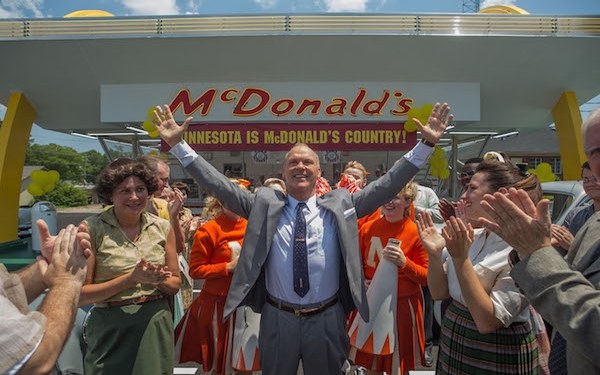 The title “The Founder” is in some ways a perplexing descriptor for a biopic of Ray Kroc, the man who took the McDonald’s burger restaurant from a local favorite to a global behemoth. Truth be told, he’s not the founder of McDonald’s. But the title fits Kroc’s specific approach to success, a version of the American Dream that states, if you want something, go out and take it — even if it belongs to someone else.

Michael Keaton stars as Kroc, a salesman peddling multi-spindle milkshake mixers out of the trunk of his car. After hitting almost every drive-in burger joint in the land, he knows a good idea when he sees one, and he appreciates the efficiency he discovers at the McDonald’s hamburger bar in San Bernadino, where the brothers Mac and Dick McDonald (John Carroll Lynch and Nick Offerman) have devised a cleverly “speedee” system for delivering burgers from grill to customer, mapping and choreographing and modifying as they’ve gone along.

They’re all too proud to share their tricks with Ray, though they have no idea what they’re in for, his cheery demeanor masking the fact that there is no ethical limit to his ambition. Their trust is Ray’s ascension to the top and their downfall. It’s the age-old story of corporate capitalism: One man’s success is another’s exploitation.

Director John Lee Hancock is known for his more saccharine, uplifting fare, but writer Robert D. Siegel brings an undercurrent of satirical acid to the story of the brothers who started a burger stand and the man who wrestled their restaurant, system, and name away from them and turned it into an institution. While he may not have thought up their burger assembly line system, Ray has a talent for branding, and “McDonald’s” is the perfect American brand. He recognizes that the sturdy, Anglo name offers a sense of small town comfort, and the golden arches designed by Dick serve as an architectural beacon of family gathering and food. Thus, the church of fast food is born.

The brothers McDonald are morally principled and committed to quality, and too weak to stand up to the insatiable Kroc. Their rejection of “crass commercialism” is their downfall, because if there’s one thing that defines American culture, for better or for worse, it’s crass commercialism. Offerman is fantastic as the stick-in-the-mud Dick, the stronger of the pair who senses Ray’s predatory nature but gives him the benefit of the doubt, to his own detriment.

Ray is an anti-hero, but “The Founder” at times seems to waffle on whether that’s a bad thing. In the film he just is who he is, a dreamer and a striver. Keaton gives a twitchy, oddball performance, but he’s still charmingly Keaton-esque, and for all the greed, lying, and screwing over of his fellow man, his behavior is presented as simply the way things are; how to succeed in business, for better or for worse. Hancock and Siegel don’t take Kroc to task.

There are moments where “The Founder” is uneven, with wonky staged archival footage and over-reliance on montage to speed the story along, but Keaton is fascinating as Kroc, a bad guy who embodies the American Dream — a man who isn’t necessarily the best or most talented, but who’s willing to step on anyone to get ahead.