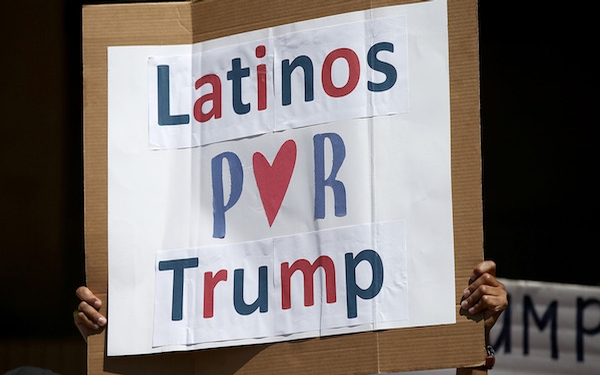 Ana Corona came from Mexico to California in 1967, following her father, brothers and sisters and joining millions who would live in the United States illegally.

Corona watched as family members got deported and escaped deportation herself. From the moment she crossed the border at age 14, her father reminded her and her siblings that they were in a precarious situation and that, by law, this was not their country.

One day, if they navigated the gantlet of being in the country illegally to become Americans, they should be thankful, her father said.

When it came time to vote for president in November, Corona mailed her ballot and voted for Donald J. Trump, a candidate who had spoken, at times, so grimly about illegal immigration and immigrants from Mexico.

“I just think we need to bring this country to what it used to be,” Corona said, “and I seriously believe that Trump is going to do it.”

Corona and many Latinos who voted for Trump believed the U.S. was going in the wrong direction and that Trump was the man to fix it. They were well aware of his strong rhetoric against immigrants here illegally, as well as his talk of mass deportations and building a wall along the border.

Some, like Corona, said they simply did not believe that Trump has the power to expel millions of people in the country on a scale to match the rhetoric that stirred his supporters. Others said they would support his tough approach.

“If it’s physically possible and we can figure out a way to make it financially fiscally responsible, I don’t have an issue with it at all,” said Alexis Moran, a 21-year-old UCLA student and president of the Bruin Republicans. “I understand that these are people who are here illegally and a lot of the time they’re taking opportunities away from legal citizens.”

Some Latinos have been called traitors and face criticism from family and friends for their support of Trump. But they believe they will be proved right in the end.

Mario Guerra, a former mayor of Downey and treasurer of the California Republican Party, came to the U.S. when he was age 6 on one of the first “freedom flights,” a U.S.-sponsored resettlement of Cubans trying to escape Fidel Castro’s Cuba.

Raised Catholic, Guerra is a deacon in the church. Last year, when he was mistakenly listed as a Trump delegate, he received blowback from some in the Latino community, calling him a traitor.

A friend emailed him: “The depth of my disappointment is immeasurable.”

But it didn’t influence Guerra’s vote. He cast his ballot for Trump, wanting, among other things, change in government and a move in a different direction.

“I think there’s grown-ups in the room that are helping the transition, and I think we’re going to be fine,” Guerra said. “I think if he can fulfill some of his business plans, his economic plans, his educational plans — I think it’s going to be great for the Latino people.”

Corona became a citizen in 1989 and has always voted Republican, attributing it in part to being pro-business. Her support for Trump is fueled by her desire to see the borders closed and to keep immigrants in the country illegally from taking advantage of the system, she said.

To Corona, immigrants coming to the country without legal papers are different from those who came during her era. She said being in the country illegally back then forced you to be on your toes more than now, when immigrants have many more advocates fighting for them. It was harder to enroll in school, workplace raids were a normal occurrence and you worried about being deported just for going to the hospital, said Corona, a business owner.

But even though she supported Trump from the beginning, she thought his early call to deport 11 million immigrants in the U.S. illegally was unrealistic, though she is on board with deporting any immigrant in the country illegally with a criminal record.

The wall just made her laugh.

“What he’s saying about the wall, I seriously don’t think that it is something that can come true or even be feasible,” Corona said. “We don’t need a wall. … We do need to strengthen our borders in a lot of ways.”

She said she also did not think Trump would remove the protection President Barack Obama gave to immigrants who were brought illegally to the country as children. Nor did she believe that Trump would end up deporting more than just criminals, something some experts said he would have to do even if he tried to adhere to his more moderate deportation vows.

Moran, who grew up in Fresno, said her favored candidate had been Sen. Ted Cruz of Texas. Although she questioned how conservative Trump was on some issues, she understood his calls for cracking down on illegal immigration, criticizing the allowance of federal aid money given to students in the country illegally.

“That’s somewhat unchanged over recent years,” said Mark Hugo Lopez, director of Hispanic research at Pew Research Center. “It’s not at a high or at a record low, but it’s a number that’s been hovering around that 20 percent to 25 percent range for some time.”

There have been two groups in the Latino electorate that have traditionally leaned more Republican: Cuban-Americans and evangelical Latinos, Lopez said.

Bob Pacheco, a Walnut city councilman, was a Democrat before he became a “Ronald Reagan Republican.”

This election season, when Trump called immigrants crossing from Mexico “drug dealers” and “rapists,’” Pacheco took it personally. He thought of his father and his grandfather, who crossed over from Mexico decades ago.

Still, Pacheco voted for Trump, believing that the candidate represented the bulk of the values he believed in. And, in the end, he said he didn’t believe Trump would insist on carrying out some of his campaign promises, such as building a massive wall along the border and making Mexico pay for it.

“Being in the political circles, I know how politicians can talk and oftentimes they don’t carry out what they say they’re going to do, but they make it sound good,” Pacheco said. “I thought perhaps that he probably would not carry it out. That’s still my belief, that he’s not going to do that.”

Pacheco said he is hopeful that Trump will be more conciliatory about immigration if he brings it up at the inauguration.

“Maybe it’s wishful thinking, but I’m hoping he’ll see reason and will in fact do things more humanely and will tamp down the rhetoric,” Pacheco said. “I think he’s already tamped down quite a bit of the rhetoric, and I think he will continue to do that.”

Within his family, Pacheco’s vote stood in sharp contrast to that of his 31-year-old daughter, who voted for Clinton. She took issue with Trump’s comments about women and his remarks about undocumented immigrants, among other things.

When she considers her father’s vote, she sees it as more of his desire to see a shift in the system than a reflection on his personal values.

“The same person who voted for Trump also picked cotton and had a father who was an immigrant to this country,” Cristina Pacheco said about her father. “It’s fascinating to me the way we want to boil this down to such a value statement of a person, of who they voted for, without understanding the nuance of the way the political system works.”

But she said she could not see herself voting for Trump, as her father did.

“I want to see change and I also want to see improvement for the lives of people of color in this nation — immigrants and women and a number of populations,” she said. “It was also a vote on behalf of other people whose voices are not heard.”

Cristina Pacheco plans to watch the inauguration, like her father, but with a different outlook on what a Trump presidency could mean. The morning after, like women in other cities, she plans to march in L.A. in protest.

“If I believe I’m a contributor to this country, being the granddaughter of an immigrant, then I believe that every person who comes here who is an immigrant also has that,” she said. “God forbid a wall policy comes through, because I will be activated and I will be out the door and doing the work to knock that down.”