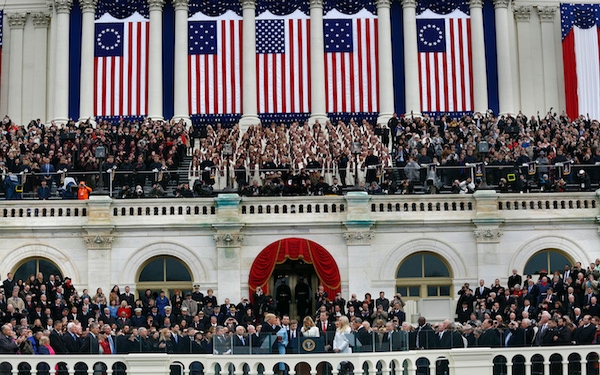 To the question of which Donald Trump would speak to America on Friday — the dark Trump who spoke angrily at his party’s convention or the more conciliatory Trump heard in the hours after his surprise election — the answer was soon clear.

Almost from its start, Trump used his inaugural speech from the grand platform of the U.S. Capitol to craft the same vision of a devastated, decayed America he presented when he accepted his nomination in July. The nation, the new president said Friday, was a place of “carnage.”

He devoted little effort to reach out to the majority of Americans who did not support him, or to those who did vote for him but remain wary of his dystopian views, his judgment or his temperament. The speech presented Donald Trump as he almost always has been: unfettered as he replaced a “hope and change” presidency with one that emphasized a country under siege from problems that he vowed to swiftly solve.

Thematically, Trump was delivering a very similar argument to the one Ronald Reagan had put forward 36 years earlier. Like Trump, Reagan critiqued the political establishment, announcing in his first inaugural address that “government is not the solution to our problem; government is the problem.”

But Reagan used far more elegant and, most important, more inclusive language. His was a less hard-edged appeal, and he made clear that his argument was with big government as a concept and not specifically the people arrayed around him on stage or those in the country whose support, or at least acquiescence, he would need in order to succeed.

Trump’s pitch was far more emphatic and more divisively stated: There’s a war between Washington and ordinary Americans, he argued. And he placed himself — firmly, pointedly, angrily — with Americans.

“For too long, a small group in our nation’s capital has reaped the rewards of government while the people have borne the cost.”

The inaugural speech spoke to the hearts and emotions of the voters who had sided with Trump all along and who flocked to the National Mall to cheer him — people who have not felt any boost from the Obama presidency despite many indicators of economic growth in recent years, and have felt stiffed by Washington and politicians of all stripes.

His talk of the ills of gangs and drugs and a leaky border, of “rusted-out factories” and schools that leave students “deprived of knowledge,” were common refrains in speeches he made to those supporters all through the campaign. And on Friday he delivered them a promise.

Yet even if his dismal description of America reflected precisely what his backers wanted to hear, there was more than a little to be skeptical about in Trump’s words. As he cast Washington as the demon, he also portrayed it as a savior — at least under his leadership — capable of bringing back jobs, spending money on roads, bridges and airports and rebuilding with “American hands.”

That’s where Trump departs from Reagan, making what seemed at times to be an argument for a stronger government, one able to protect the blue-collar constituency that has given him such support.

Few in the Capitol appear to have fully signed on to that kind of shift in government. So how Trump will accomplish all of his goals remains in question.

One challenge for the new president is whether the larger pool of Americans he now represents can find a reason to believe in his message.

A more inclusive speech might have opened the door to added support. Mixing a strong appeal to conservative voters with sunny entreaties to others was Reagan’s key attribute, helping propel him to two successive terms. President George W. Bush likewise put an optimistic and inclusive face on Republicanism, and also won a second term.

Trump tried that approach in the early morning hours of Nov. 9 when he first claimed the presidency. Then he was the picture of conciliation, and far more humble than he appeared on Friday.

“For those who have chosen not to support me in the past, of which there were a few people,” he said then, “I’m reaching out to you for your guidance and your help so that we can work together and unify our great country.”

Since then, however, he has more often emphasized the divisive — extending fights with former Democratic rival Hillary Clinton, civil rights leader John Lewis and a host of American companies that he has attacked via Twitter.

Even during Thursday’s inaugural concert at the Lincoln Memorial, standing before a statue of the Republican president who persevered to unite an even more grievously divided nation, Trump recounted his victory with a defensiveness uncommon to the winner.

A second challenge for Trump is finding allies. Implicit in his address Friday was the notion of the new president as a singular figure, unattached to, and indeed fighting, both major political parties. That perhaps fits into Trump’s view of himself, but it suggests the potential of pitched wars ahead with both sides.

In attacking the political establishment, after all, he was clearly not singling out President Barack Obama as the cause of the nation’s ills; he was firing as well at his fellow Republicans, who wholly control Capitol Hill, using the kind of scorn he often delivered during the campaign.

Trump softened that message a bit later in the day, complimenting former President Bill Clinton and Hillary Clinton at a luncheon with members of Congress and asking for bipartisan help. But those appeals may have been undermined by the tone of the day’s main speech, which had a much larger audience.

Trump as a man unto himself is the strategy that got him to the White House, helping to craft a sense of authenticity that none of his Republican primary rivals, nor Hillary Clinton, could match.

But his accomplishments will be limited without a strong alliance in Congress or a definitive broadening of his base of support, something he did not accomplish during his transition, polls show.

Trump spent his campaign telling America exactly what he believed. Much of the nation’s political establishment imagined that if he were elected — a possibility they thought was minimal — Trump would pivot, that he would soften the harsh tone and speak to a population larger than his most avid followers.

The Trump who spoke to the nation Friday was precisely the Trump who won the presidency. And now he will find out if that is enough.