Trump takes first steps in a new era of conservatism 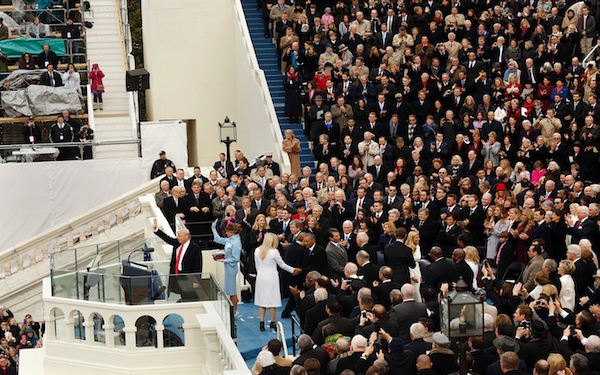 Freshly sworn in to office, President Donald Trump set about Friday trying to deliver the change he promised as he took the helm of the vast executive branch bureaucracy and began steering it toward a new conservative-dominated government.

Away from the pomp and circumstance of Inauguration Day that celebrated the handover of power to Trump from former President Barack Obama, the nuts-and-bolts implementation began largely behind the scenes.

In a ceremonial office of the Capitol shortly after he took the oath, Trump signed papers nominating candidates for Cabinet secretary posts, paving the way for their confirmations. The Republican-led Senate voted hours later to approve retired Gen. James N. Mattis as secretary of Defense and John F. Kelly, another retired Marine general, as head of Homeland Security.

And Friday night in the Oval Office, Trump signed a largely symbolic executive order directing agencies to take steps to “ease the burden” of the Affordable Care Act, Obama’s signature health care law, as Republicans work to repeal and replace it.

“The time for empty talk is over,” Trump declared in his inaugural address. “Now arrives the hour of action.”

Early clues about Trump’s top priorities came on the updated White House website, including a commitment to reverse Obama’s climate plans, pursue tax reform, enhance law enforcement and the military, and withdraw from a major Pacific Rim trade pact that had been an Obama administration priority.

Trump’s most significant plans will require cooperation from Congress. But Obama’s own aggressive use of presidential authority also provides a path Trump can use to quickly reverse course on his predecessor’s actions on immigration, foreign policy and other issues.

An hour after Trump assumed the presidency, the Department of Housing and Urban Development indefinitely suspended a pending rate cut for mortgage insurance required for government-backed home loans.

The move reverses a policy announced in the waning days of the Obama administration that would have trimmed payments for borrowers by hundreds of dollars a year. Similar directives were being made at other agencies, an adviser said, though not all were expected to be announced.

Ben Carson, Trump’s nominee for Housing secretary, singled out the policy for scrutiny during his confirmation hearing last week amid GOP concerns about whether taxpayers would be responsible for the loans if they started to go sour.

Like many other candidates in the lengthy presidential campaign, Trump had identified dozens of actions he intended to take on his first day in office. As Trump’s inauguration approached, aides increasingly focused on which would ultimately make the list.

Nevertheless, the rocky nature of the transition meant Trump was forced to ask dozens of Obama administration appointees to stay on until he could fill their jobs.

And the business of government did not pause for the transfer of power. The Pentagon announced Friday that U.S. drones and warplanes launched airstrikes the day before on a Qaida training camp in northwestern Syria, killing more than 100 militants. Although the U.S. bombs Islamic State fighters daily in Syria, it does not hit al-Qaida strongholds nearly as often. The exceptions are known al-Qaida leaders, who are targeted with drone strikes.

The strike was authorized by the outgoing Obama administration; Trump may pull back U.S. support for rebels struggling against President Bashar Assad’s government.

Republican congressional leaders signaled their readiness to work with the new president, even if his style was one that at times discomfited some in the party.

“He has been underestimated often. But he never let it stop him from succeeding,” Senate Majority Leader Mitch McConnell, R-Ky., said in a toast to Trump at a congressional luncheon in his honor. “We are wishing him similar success as he turns to the charge of governing.”

The Senate voted overwhelmingly to confirm Mattis, 98 to 1, before turning to Kelly. McConnell criticized Democrats who he said were standing in the way of additional confirmation votes.

In 2009, six of Obama’s Cabinet picks were confirmed on Inauguration Day — all unanimously, when Democrats had a strong majority in the Senate.

Democrats who bitterly oppose some of the Trump nominees now no longer hold the power to block them, only to delay them. Still, subjecting Trump’s nominees to more scrutiny could weaken them politically, thus diminishing their power to implement policies Democrats oppose.

Senate Minority Leader Charles E. Schumer of New York said the performance of many of Trump’s Cabinet choices during confirmation hearings have only deepened many Democrats’ concerns.

“The more we learned about these nominees, the more important a thorough and fair process became. And the more it became clear Republicans were simply trying to jam through these nominees, out of sight of the American people,” he said this week.

The new White House press secretary, Sean Spicer, said it was Democrats who were not acting in good faith to “ensure a continuity of government.”