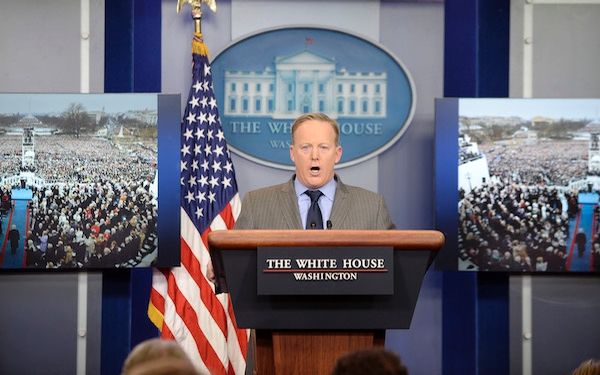 White House press secretary Sean Spicer summoned reporters Saturday afternoon to chastise them, singling out two Twitter posts that had angered the new administration and suggesting they downplayed the turnout for the inauguration Friday.

Spicer spoke less than two hours after President Donald Trump, addressing an audience at the CIA, also gave a tongue-lashing to the “dishonest media.”

Much of the anger concerned the size of the crowd that had appeared on the National Mall for Trump’s swearing-in on Friday.

Photographs showed large areas on the mall without people, a fact made apparent by white flooring used to protect grassy areas. Adding to the controversy were subway ridership figures from the Washington Metropolitan Area Transit Authority showing that far fewer people had used the subway in the hours before the inauguration that in previous years, including the second inauguration of President George W. Bush.

Spicer said one Twitter post, which he did not further identify, suggested that the mall was not full, which was borne out by photos.

“Inaccurate numbers involving crowd size were also tweeted,” Spicer said. “No one had numbers because the National Park Service, which controls the National Mall, does not put any out.”

“All of this space was full when the president took the oath of office,” Spicer said, suggesting that more than 700,000 people filled the area.

Trump, in his CIA appearance, said he thought he had seen at least a million people, maybe up to a million and a half.

“This was the largest audience to witness an inauguration, period, both in person and around the globe,” Spicer said.

He added that the Washington Metro mass transit system reported that 420,000 people had used the rail system on Friday, “which actually compares to 317,000 people that used it for President Obama’s last inaugural.” That second number, however, was only for use until 11 a.m., not the full day.

Although Spicer didn’t mention it, significantly more riders used the rail system Saturday for the Women’s March on Washington, which some characterized as a repudiation of Trump. Washington Metro said that as of 4 p.m. Saturday, ridership had topped 597,000, “with heavy crowds entering the system at all downtown stations.”

Spicer also blasted a Time magazine reporter, Zeke Miller, whom Trump also had singled out by name, for a Twitter post that said a Martin Luther King Jr. bust had been removed from the Oval Office.

“This was irresponsible and reckless,” Spicer said.

Miller later corrected his mistake, saying the bust had been hidden from view by a door and a Secret Service agent.

However, it seemed as if hard feelings lingered over the incident.

“We’re going to hold the press accountable,” Spicer said after making the statement. He took no questions.