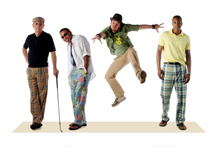 Some guys will forever be content in the comfort of their traditional khakis. But for those willing to shake things up, the chance to wear it loud and wear it proud most certainly exists.

You can find patterned pants that complement your golf clubs, or bold ones that work just as well in nightclubs. It's a spectrum that ranges in style from the traditional to the hipster.

The audience for such a look, however, doesn't appear to be quite as wide.

“It's definitely more of a quirky kind of thing, and not everyone can pull off wearing them,” says Todd Snyder, head of men's design at J. Crew. Snyder believes that some can definitely sport the look better than others. And who might those guys be?

Someone who likes to express himself in a different sort of way. Someone unafraid of being a bit quirky. Someone comfortable in whatever it is that he's wearing – and willing to claim it as his own.

“You can style it up and make it a bad boy golf look,” Snyder says. “Or you can wear them with a polo and make it more of a traditional Hamptons look. If you want to hip it up, you can add a graphic T-shirt, a vintage belt and maybe some sneakers.”

“That's the important thing. Wearing it as your own style.”