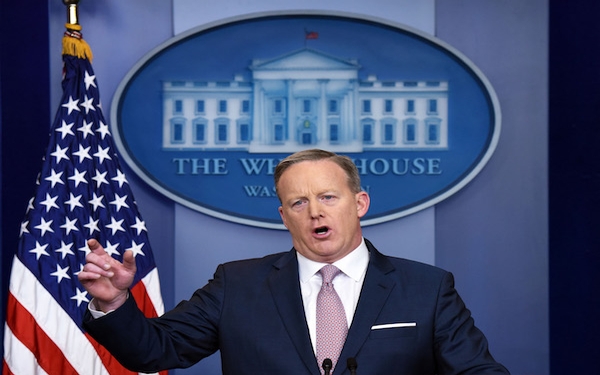 Even after moving into the White House, the new leader of the free world doesn’t appear to have gotten over the slights of not being taken seriously. Trump finds what’s written and said about him frustrating, disillusioning, demoralizing and undermining to his credibility, White House press secretary Sean Spicer told reporters gathered for his first formal briefing.

“It’s not about one tweet. It’s not about one picture. It’s about a constant theme,” Spicer said in a lengthy monologue. “It’s about sitting here every time and being told, ‘No. Well, we don’t think he can do that. He’ll never accomplish that. He can’t win that. It won’t be the biggest. It’s not gonna be that good. The crowds aren’t that big. He’s not that successful.’”

Spicer spent more time on the subject than on any other issue during a briefing of more than an hour in which he was asked about such weighty topics as the U.S. Embassy in Israel, immigration and tax reform.

Of course, presidents and their staffs have been complaining about the press long before the advent of Twitter or television. Usually, they gripe to reporters privately while accepting that the intense scrutiny is part of the job.

But it’s seldom discussed publicly, in so much detail, with so much anguish and so soon after a president has taken office. And it helps explain why Trump has sparred so vigorously with the press over the size of the crowds at his inauguration, sending Spicer out Saturday to falsely assert they were the biggest ever, rather than move on to more substantive battles over policy.

Trump comes into office with the lowest approval ratings for a new president in decades. His clashes with the media, which helped fuel his rise but have been his foil in rallying his anti-establishment base, promise to remain a constant in his administration. One of his most influential advisers, Stephen Bannon, until recently ran Breitbart News, a conservative website that feeds off its antagonism of the mainstream media. Another top adviser, Kellyanne Conway, coined the phrase “alternative facts” on Sunday to explain why Trump and his aides were, once again, at odds with fact-checkers.

In making his case that Trump has been mistreated, Spicer reached back to doubts expressed by pundits that began before Trump ran for president. Spicer keyed in on primary battles where he said Trump was underestimated. He complained about an erroneous news report, which had to be corrected, that Trump removed a statue of Martin Luther King Jr. from the White House. And he painted a vivid picture of a man staring out at a sea of supporters during the inauguration Friday, only to feel stung later that he wasn’t given enough credit for his popularity.

“It’s an amazing view,” Spicer said. “And then to hear, ‘Well, look at this shot,’ and … ‘It wasn’t that big.’ It’s a little demoralizing because when you’re sitting there and you’re looking out and you’re in awe of just how awesome that view is and how many people are there and you go back and you turn on the television and you see shots of comparing this and that.”

Even as Spicer struck a more conciliatory tone with the media on Monday than he did over the weekend, smiling often and exchanging banter, he continued to insist he had not misled in his attempts Saturday to assert that more people viewed Trump’s inauguration than any other in history.

White House veterans from President Barack Obama’s staff had little sympathy for Spicer, even as they agreed the glare of the press can be harsh on 1600 Pennsylvania Ave.

“Welcome to the major leagues,” said Dan Pfeiffer, a former Obama communications advisor, in an email.

And they found it rich that Trump, who grew his political following by questioning Obama’s legitimacy and American birthplace, is now complaining that others are trying to undercut his credibility as president.

“This is your prize,” said Bill Burton, another Obama alumnus. “You can complain about it for the next four years or you can accept the fact there is a press corps that is going to write things that you don’t agree with on a day-to-day basis.”

But Ari Fleischer, a former press secretary for George W. Bush, said he thought Spicer and Trump were voicing a frustration felt by many Republicans, who believe the press has a liberal bias and a particular grudge against Trump. Fleischer had been critical of Spicer’s performance Saturday, where he felt Spicer was on thinner ground, but he gave the press secretary high marks Monday.

“In the past, a lot of Republicans have thought what Trump thinks, and then they bite their tongue,” Fleischer said. “Trump doesn’t bite his tongue.”