Mary Tyler Moore, actress who defined the part of modern woman, dies at 80 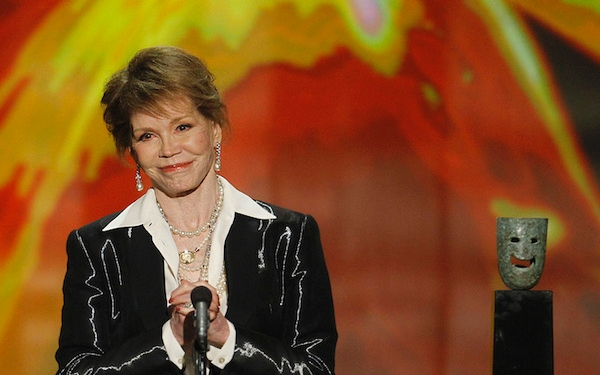 Comfortably single and unafraid to stand up to her gruff newsroom boss, Mary Richards splashed onto television screens at a time when feminism was still putting down roots in America, a woman who charged through the working day with equal parts humor and raw independence.

Mary Tyler Moore’s character charmed TV watchers, earned the actress Emmy nominations and became a potent symbol of womanhood in the 1970s. The actress and her television character became so entwined that Moore became a role model for women who sought to challenge the conventions of marriage and family.

“She wasn’t married. She wasn’t looking to get married. At no point did the series end in a happy ending with her finding a husband — which seemed to be the course you had to take as a woman,” former first lady Michelle Obama said in an interview in August. As a young girl, Obama said, she drew inspiration from the character.

Moore died Wednesday in Greenwich, Conn., from cardiopulmonary arrest after being hospitalized with pneumonia. She was 80.

In a career that began as Happy Hotpoint, the dancing and singing 3-inch pixie in Hotpoint appliance commercials on “The Adventures of Ozzie and Harriet” in 1955 when she was 18, Moore went on to star in television and films and on Broadway.

In 1981, she received an Academy Award nomination for best actress for her portrayal of the emotionally cold mother in “Ordinary People,” the Robert Redford-directed drama about an upper-middle-class family dealing with the death of a teen-age son in a boating accident and the attempted suicide of their surviving son.

In a statement Wednesday, Redford said he admired Moore for taking such a role.

“The courage she displayed in taking on a role darker than anything she had ever done was brave and enormously powerful,” he said.

The unsympathetic, nearly bloodless role was a departure for Moore, who remains best-known for her light and sunny touch in two classic situation comedies that together earned her six Emmy Awards.

Moore was still largely unknown when she was cast as Laura Petrie, the suburban housewife and mother of a young son opposite Dick Van Dyke’s TV comedy writer husband Rob on “The Dick Van Dyke Show.”

The acclaimed sitcom, which aired on CBS from 1961 to 1966, earned Moore her first two Emmys and made her a star.

Her Capri-pants-wearing Laura brought something new to the traditional sitcom role of wife and mother: youthful sex appeal.

As Carl Reiner, the series’ creator, said of Rob and Laura in a 2004 TV Guide interview: “These were two people who really liked each other.”

Moore agreed, saying: “We brought romance to comedy, and, yes, Rob and Laura had sex!”

Van Dyke often praised Moore’s abilities as a comedic actress — one who has been credited with turning crying into a comedic art form and memorably got her toe stuck in a hotel room bathtub faucet in one episode.

“She was one of the few who could maintain her femininity and be funny at the same time,” Van Dyke said in a 1998 interview with the Archive of American Television. “You have to go as far back as Carole Lombard or Myrna Loy to find someone who could play it that well and still be tremendously appealing as a woman.”

After the Van Dyke show ended in 1966, Moore starred as Holly Golightly in a problem-plagued Broadway musical version of “Breakfast at Tiffany’s” that producer David Merrick closed after four previews in New York.

Moore also played Julie Andrews’ roommate in the hit flapper-era comedy-musical movie “Thoroughly Modern Millie” in 1967. But her budding film career, which included playing a nun opposite Elvis Presley’s ghetto doctor in “Change of Habit,” was less than stellar.

She was reunited with Van Dyke in a 1969 musical-variety TV special, a critical and ratings success that spurred CBS to offer her a commitment to do her own half-hour comedy series.

Moore and her second husband, TV executive Grant Tinker, created MTM Enterprises, their own independent TV production company, whose logo — in a takeoff on MGM’s roaring lion — was a meowing orange kitten.

Tinker hired writers James L. Brooks and Allan Burns to create and produce “The Mary Tyler Moore Show,” which debuted on CBS in 1970 and made TV history.

The series, featuring Moore as Mary Richards, a single woman in her 30s who lands a job as an associate producer in a Minneapolis TV newsroom, won 29 Emmys during its seven-year run.

Four of those Emmys went to Moore, whose character became a symbol of the independent 1970s career woman.

As Ed Asner’s lovably gruff and rumpled Lou Grant tells her when she applies for a job in the newsroom at WJM-TV: “You know what? You’ve got spunk. I hate spunk.”

Ellen DeGeneres, who later invited Moore to play herself in several episodes of the sitcom “Ellen,” said she was an admirer of both Moore and her alter ego. “Mary Tyler Moore changed the world for all women,” she tweeted after Moore’s death became public.

In the wake of the success of “The Mary Tyler Moore Show,” the MTM empire grew to include series such as “The Bob Newhart Show,” “Rhoda,” “Lou Grant,” “Remington Steele,” “WKRP in Cincinnati,” “Hill Street Blues” and “St. Elsewhere.”

After “The Mary Tyler Moore Show” left the air in 1977, Moore failed with two TV comedy variety shows within the next two years.

But she scored on Broadway, winning a special Tony Award in 1980 for her performance as the quadriplegic lead character in the Broadway revival of “Whose Life Is It Anyway?” — a part originally written for a man.

In 1993, Moore won her seventh Emmy, for her supporting role as the ruthless owner of a 1940s Tennessee adoption agency in the Lifetime cable drama “Stolen Babies.”

Her two returns to the sitcom format in the mid- and late ’80s — “Mary” and “Annie McGuire” — were short-lived, as was the 1995 newspaper drama “New York News,” on which she played the autocratic editor of a tabloid newspaper.

In the years after “The Mary Tyler Moore Show,” she dealt with a series of personal problems and tragedies.

In 1978, her younger sister, Elizabeth, died of a drug overdose. In 1980, Richie, her 24-year-old son from her first marriage, fatally shot himself in what was ruled an accident. And in 1992, Moore’s brother John, a recovering alcoholic, died after a long battle with kidney cancer.

In the mid-’80s, Moore checked into the Betty Ford Center to seek treatment for alcoholism.

In a 1986 interview with Maclean’s magazine, Moore said: “I am glad I was able to be a kind of role model for other women who identified with my ladylike qualities, who were then able to say, ‘Well, if Mary can admit she had a problem with alcohol, then maybe I can too.’ ”

Asner said he treasured the years he worked alongside Moore.

“I will never be able to repay her for the blessings that she gave me,” he said in a tweet.

Moore was born in the New York City borough of Brooklyn on Dec. 29, 1936. Her father was a clerk for Consolidated Edison who worked at the Southern California Gas Co. after the family moved to Los Angeles in 1945.

Moore began taking dance classes while in grade school and appeared in recitals. She continued to take dance lessons and perform through her years at Immaculate Heart High School, where she dreamed of dancing her way to stardom.

In her autobiography, Moore described her strict Catholic father as “undemonstrative” and her more fun-loving mother as an alcoholic. As a result, Moore spent half the time living with her parents and the other half living with her aunt and grandmother.

“It was not an ideal home life,” she said in a 1999 interview with the Ottawa Citizen, noting that, even if her mom and dad “weren’t the best of parents,” they had the best sense of humor.

“Thank God, I was not abused in any way, but I was seeking approval of some sort, in many different ways,” she said. “For me, it turned out to be a pat on the back for entertaining people.”

She was 18 and five months from graduating from high school in 1955 when she met 27-year-old Dick Meeker, an Ocean Spray cranberry products salesman, who had moved into a small apartment in the house next door to her parents’ home.

They were married two months after she graduated, and their son Richie was born the following year.

As a working mother, Moore found jobs dancing in the chorus of “The Eddie Fisher Show” and other TV variety shows, and appeared in commercials.

Her first regular acting role came in 1959 when she played Sam, the sultry-voiced telephone operator on the David Janssen TV series “Richard Diamond, Private Detective” — an uncredited role in which no more than her legs or an extreme close-up of her mouth were seen on screen.

Publicity for the show played up the mysterious Sam. But, Moore wrote in her book, when she asked for more money, she was replaced by another anonymous actress after 13 episodes.

After her stint as Sam, Moore played small parts in TV series such as “77 Sunset Strip,” “Hawaiian Eye,” “Bourbon Street Beat” and “Riverboat.”

She auditioned to replace Sherry Jackson as Danny Thomas’ grown-up daughter on his popular sitcom, but missed landing the part by a nose: her own.

“Here’s the reason you didn’t get the part,” she later recalled the famously large-nosed Thomas telling her: “With a nose like yours, no one would believe you’re my daughter.”

Two years later, when Thomas, executive producer Sheldon Leonard and Reiner were looking for someone to play the wife in Van Dyke’s new TV series, Thomas said: “Who was the kid we liked so much last year, the one with the three names and the funny nose?”

Moore, whose first marriage ended in divorce in 1961, married Tinker in 1962. They were divorced in 1981. In 1983, she married Dr. Robert Levine, a Manhattan cardiologist.

She was diagnosed with Type 1 diabetes in 1969 and later served as the international chairman of the Juvenile Diabetes Research Foundation.

In 2012, she received the Screen Actors Guild Life Achievement Award.