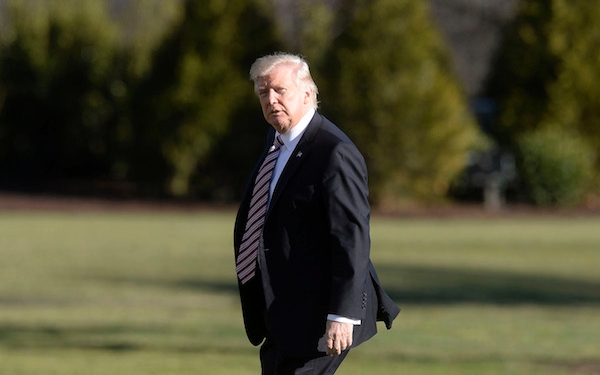 The Trump administration said Thursday that it would seek to impose a tax on imports, at least from countries with which the U.S. runs a trade deficit, as a way to pay for the wall on the Mexican border that is one of President Donald Trump’s central campaign promises.

Although Trump repeatedly has said that Mexico would pay for the wall, the tax that White House press secretary Sean Spicer described to reporters actually would fall on U.S. consumers, not on Mexicans.

“Right now, our country’s policy is to tax exports and let imports flow freely in, which is ridiculous,” Spicer told reporters traveling with Trump back to Washington after a speech in Philadelphia.

By reversing that and taxing imports, “we can do $10 billion a year, and easily pay for the wall just through that mechanism alone. That’s really going to provide the funding,” Spicer said.

Although Spicer did not refer to the tax by name, his description of it seemed to make clear that he was referring to a complicated portion of the tax reform plan proposed by House Republicans. That was confirmed by House GOP officials, including Speaker Paul Ryan’s communications director Brendan Buck.

The provision, known as a destination-based cash flow tax, essentially would function as a national sales tax on imported goods and services. It’s a key part of the GOP tax plan, but one that Trump has previously criticized as too complicated. As part of the plan, the House GOP would also lower the corporate tax rate to 20 percent from its current maximum level of 35 percent.

Such a tax would likely increase prices on some staples for American consumers, such as tomatoes and avocados, once U.S. retailers pass along the tax to consumers. Mexico is the second-largest supplier of agricultural imports to the U.S.

The price increase for consumers would be at least partially offset by an increased valuation in the dollar, experts have said.

Trump alluded to the plan earlier in remarks to House and Senate Republicans in Philadelphia.

“We’re working on a tax reform bill that will reduce our trade deficits, increase American exports and will generate revenue from Mexico that will pay for the wall, if we decide to go that route,” Trump said.

The U.S. imported $316.4 billion in goods and services from Mexico in 2015, while exporting $267.2 billion, according to the office of the U.S. Trade Representative. Mexico is the United States’ third-largest supplier of imports — chiefly vehicles, electrical machinery and mineral fuels.