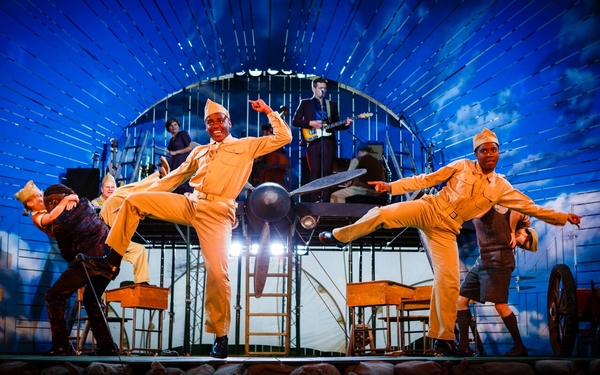 The brilliant theatricality of Kneehigh, the innovative United Kingdom-based theater company, will be on display at the Wallis Annenberg Center for the Performing Arts once again when 946: The Amazing Story of Adolphus Tips has its Los Angeles premiere.  Based on the beloved book by War Horse author Michael Morpurgo, 946 explores everything we thought we knew about the D-Day landings in this tender musical tale of love and war. Adapted by Morpurgo and Emma Rice, who also directs, 946 is a Kneehigh production presented in association with Birmingham Repertory and Berkeley Repertory Theatres. Performances begin February 9 with the opening on February 10.

Kneehigh are the theatrical alchemists whose Brief Encounter wowed audiences on The Wallis’ Bram Goldsmith Theater stage in 2014. Originally produced by The Wallis’ Artistic Director—and former Kneehigh Executive Producer—Paul Crewes, 946 is a tender coming-of-age tale that uncovers the secrets behind World War II’s D-Day landings. Set in the idyllic seaside village of Slapton Sands, the lives of Lily, her family, and her fiercely independent cat Tips are barely touched by war until American soldiers occupy their house and surrounding land.  With a live onstage swing band, enchanting puppetry and Kneehigh’s signature stage sorcery, director Emma Rice configures a story of love, war and prejudice that crosses borders both geographical and generational.

“946 was the last large scale piece of work that I produced in the UK,” says Crewes. “It is a real honor to now bring it to The Wallis in 2017 and reunite with my longtime theatre partners Emma Rice and Mike Shepherd. I certainly hope the audience loves 946 as much as Brief Encounter, which was the last production that Kneehigh brought to The Wallis and my first time working on this wonderful stage.”

“What thrill to return to The Wallis! Not only will we present a piece of work that we know will bring joy, tenderness and hope, but we will be joining forces again with our dear friend and colleague, Paul Crewes,” said Rice. “I am smiling as I write as it feels a little like coming home; a theme that is explored in our beloved 946. Expect a meeting of hearts and minds, onstage and off, when Kneehigh return – we can’t wait!”

946: The Amazing Story of Adolphus Tips is a fantastical and celebratory piece that brings together English and American actors and musicians to tell a true story of the relationships between English villagers and American GIs. Based on Morpurgo’s young adult novel The Amazing Story of Adolphus Tips, the story was adapted into a theatrical presentation by Morpurgo and the show’s director Emma Rice. It received its world premiere at Kneehigh Asylum in Cornwall, UK, in 2015 and performed to great acclaim at Shakespeare’s Globe in London in September 2016. Following its Southern California run, the production moves to St. Anne’s Warehouse in Brooklyn, NY.

LAArtsOnline.com is the media sponsor for 946.

Performance dates are February 9 thru March 5. Single tickets for 946 are now available for $29 – $129. For more information or to purchase tickets, visit TheWallis.org, call 310.746.4000, or stop by in person at the Wallis Annenberg Center for the Performing Arts Ticket Services located at 9390 N. Santa Monica Blvd., Beverly Hills, CA 90210. Ticket prices subject to change.