Brit Marling takes viewers on a metaphysical journey in ‘The OA’ 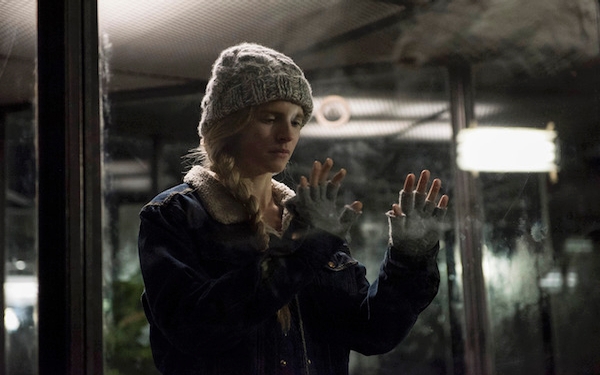 Brit Marling in the Netflix series "The OA." (JoJo Whilden/Netflix)

Brit Marling could have gone from the Chicago suburbs to Georgetown to Goldman Sachs to the next neat little box presented along her linear and stable progression of a life.

Instead, she sent the man whose family she killed in a car crash to another Earth, became a time-traveling cult leader, infiltrated a group of anti-corporate anarchists and, most recently, survived multiple near-death experiences. Through storytelling.

Marling is a writer and actress, whose latest project is the Netflix series “The OA,” an enigmatic jigsaw of a show with endless combinations that never result in a frameable picture. At the center of the eight-episode whirlpool is Marling as the blind and kidnapped Prairie Johnson, a woman who regains her sight after one of many near-death experiences, escapes her captor, starts calling herself The OA and shares her story with an odd quintet of Midwestern teens and an algebra teacher.

As Marling chats about “The OA” and its mix of metaphysical possibility and Midwestern sensibility, she connects small threads to larger ideas, every answer to another question.

When asked to describe what she’s like, Zal Batmanglij, her longtime collaborator and co-creator of “The OA,” tells a story from the set. At the end of the five-month shoot, a grip came up to him and said, “I’ve never encountered someone like Brit before except Meryl Streep.” What surprised him about the comment was that it had nothing to do with talent or appearance but was about a shared grace, a rare ability to sustain calmness in chaos.

“It’s been amazing to get to know Brit because every year, every couple years, I feel like I get let in through another door,” Batmanglij says. “It’s this mysterious house.”

For Marling, who grew up in Winnetka, the idea of working on a film set or collaborating on a TV series didn’t always seem practical.

“I don’t even know where I thought movies came from,” she says. “But I think I thought they came fully formed from a dream-cloud factory.”

After studying economics and graduating as the valedictorian of her class at Georgetown, Marling ditched linear regressions for “a living that feels like it’s stirring my soul.”

How to stir a soul, and how that shake-up can change a life, underlines much of “The OA” and pops up throughout Marling’s past endeavors of playing and writing women with malleable identities, who draw power from the stories they create for themselves.

“I sometimes wonder what it would have been like if I had been so drawn to acting but had I been a man,” she says about authoring her own roles. “I feel like I might have found more purchase in a lot of the stories that were being told and it wouldn’t have seemed like such a violation of integrity or some sort of political compromise.”

“The OA” takes the damsel-in-distress trope and reframes it. There’s no Liam Neeson-esque avenger who embarks on a rescue journey. Instead, a woman’s victimhood becomes something active and she, decked out in athletic apparel, drives the narrative.

“Like she’s on a mission to do something,” says Marling. “We just don’t know what that something is yet.”

Marling thought it would be interesting to watch a group of boys first hear this woman’s story, in turn learning to become listeners.

Near the beginning of the series, the camera zooms through the eyes of French, one of the high schoolers, beginning The OA’s epic.

“The zoom in (of my face), I think that’s the final realization of, all right, I’ll give in to it and I’ll actually imagine it,” says Brandon Perea, the Chicago native who plays the overachieving French.

Marling describes that moment as the beginning of the group’s collective memory. It’s not an exact flashback but the story as The OA has decided to share it and as the followers have decided to interpret it. And then it’s up to the audience to make sense of that.

In preparation for the show, Marling and Batmanglij traveled to Midwestern high schools, sitting in the back of classrooms and talking to teens. Marling thinks of the Midwest, the setting for the show, as a “kind of heart” of the country. She wanted to reclaim the ‘burbs as a space free of “hipster-ironic irony” and instead treat them, and the people within, with reverence.

“You know, people are falling in love and having their hearts broken in Panera and in Costco,” she says.

In Illinois, she, Batmanglij and the team stopped at Thomas Jefferson High in Rockford and Peoria High in Peoria. They were struck by the role of technology in the students’ lives and the subsequent inescapable online bullying.

Marling remembers one student who said he would wake up three or four times in the middle of the night to make sure no one had posted anything negative online about him.

“There’s many layers to growing up as a teenager in the suburbs,” says Perea, who left the Midwest at 16 to pursue acting. “And people trying to break out of it. Dream chasers in the suburbs.”

And throughout “The OA,” the boys and their teacher find wonder and purpose through largely technology-free happenings. In the much-discussed (and divisive) final scene involving a school shooting, what stops the shooter is a bit of faith fueled by one woman’s story.

For fans who have subscribed to the show’s colossus of sincerity, theories run deep. Are the teens and their teacher Betty Broderick-Allen (played by “Inside Out’s” Phyllis Smith) foils of Prairie’s fellow captives? Are there multiple dimensions at play? How could The OA have learned to read the books hidden under her bed if she had read Braille before the kidnapping?

“There’s stuff that we did on set that they don’t even tell us what it means,” says Perea.

Marling and Batmanglij say even they were surprised by some theories.

They both mention a theory involving the last seven minutes of the season which connects those final moments to The OA’s last seven years in captivity. They say it was not a conscious choice.

“I didn’t realize how much people would need affirmation on what they already feel,” says Batmanglij, who says he’d love to continue the Netflix novel and provide some answers but also says he hopes “that we can appreciate a punk perspective, a perspective that’s not sanctioned.”

“There is a center that we could arrive at,” says Marling, about potential seasons. “But that said, it’s up to fate. … It’s trusting the unknown, I guess.”