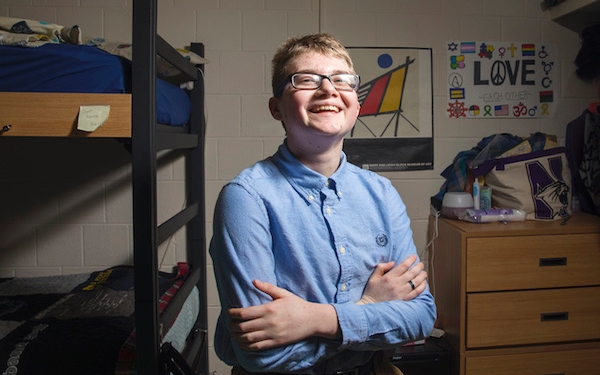 Northwestern University freshman Adam Davies, a transgender man, was not asked to join a sorority as he had hoped, but praised the university for letting him experience the recruitment process.

A Northwestern University freshman who recently came out as transgender tried to join a sorority this month, yearning for deeper friendships on campus.

The case is unusual because the student is a transgender man, born with a female body but identifying as male, and already beginning to make that transition. Eighteen-year-old Adam Davies said he was drawn to the tenets of Greek life — philanthropy, bonding and leadership — but that with his changing body he might not feel comfortable living in a fraternity.

“I guess I see it on a level that transcends the gender binary,” said Davies, of Appleton, Wis.

While many international sororities have in the last few years adopted language to better include transgender women, this was among the first instances in which an openly transgender man participated in Panhellenic Recruitment, according to the organization’s national conference based in Indianapolis, which covers 26 social sororities on more than 670 campuses around the world. Northwestern officials believe this is likely the first case of its kind at the university.

In the end, no sorority extended Davies a bid. Because each chapter’s membership decisions are private, it’s unclear whether gender identity was a factor. Other students — regardless of gender identity — in past years have attempted to join a sorority without receiving a bid.

Davies said he’s disappointed he won’t experience a candlelight ceremony, wear Greek letters or have a mentoring relationship with an older sorority member.

Before winter recruitment, which ran Jan. 5-10, Davies said he was told by Northwestern staff that all 12 social sorority houses were notified of his gender identity and many of their international headquarters might find him ineligible based on their bylaws or guidelines, which often state that recruits must be women or identify as women.

“Student Affairs staff explained what he might expect based on national organizations’ bylaws, with the information we had available at that time,” university spokesman said Alan Cubbage in an email, adding that Northwestern has no authority over any sorority’s membership decisions.

Davies said he was transparent throughout the recruitment process. He said he felt welcomed at all of the houses and described his talks with members as deep and introspective, often delving into the nature of feminism.

“I made it very clear that I was a transgender man,” he said. “Because I’m not afraid of who I am.”

Amid an ongoing national debate on transgender rights covering everything from public bathroom use to school locker rooms, Davies’ case highlights the particularly thorny realm of Greek life, where sex and gender identity have historically been at the core of membership eligibility.

While Title IX prohibits sex discrimination in education, the federal government has declared social fraternities and sororities exempt and free to make their own membership decisions, including those based on gender identity.

“Those organizations are therefore permitted under Title IX to set their own policies regarding the sex, including the gender identity, of their members,” according to a May 13 letter regarding transgender students issued by the U.S. Department of Justice Civil Rights Division and the U.S. Department of Education Office for Civil Rights. “Nothing in Title IX prohibits a fraternity from admitting transgender men or a sorority from admitting transgender women if it so chooses.”

The letter does not directly address the prospect of a sorority admitting a transgender man.

Over the past few years, many fraternities and sororities have on their own crafted language accepting transgender members, said Tim Burke, a Cincinnati attorney who represents Greek organizations and publishes a newsletter on fraternal issues.

“This didn’t become a big issue on college campuses until a few years ago,” he said. “The whole question of transgender membership in fraternities and sororities is changing virtually on a daily basis.”

Even as Greek organizations become more inclusive when it comes to gender identity, Burke believes the vast majority of fraternities and sororities will staunchly defend their right to remain a single-sex organization. He thinks even sororities accepting of transgender recruits identifying as women would balk at including anyone who identifies as a man.

The Tribune was successful in reaching four of the 12 Panhellenic sororities at Northwestern.

A Delta Gamma official said its membership is open to women and transgender people who identify as women, but men are excluded. A Pi Beta Phi official described the sorority as “a women’s organization for individuals who live and self-identify as women.”

Kappa Alpha Theta spokeswoman Liz Rinck said the organization was founded in 1870 in part to help support women in an often misogynistic social and academic atmosphere.

“As some of the earliest women to attend college, Kappa Alpha Theta’s founders fought for inclusion in a frequently hostile social and educational environment,” she said. “Our mission is not to define the experience of being a woman but to offer lifelong opportunities for social, intellectual and moral growth. Membership in Kappa Alpha Theta is open to those who identify as women.”

Tri Delta said it is “committed to supporting and serving women” but added that a task force is constantly reviewing policies, said Stacy Gillard, a vice president with the organization.

“At a time when society is wrestling with questions about how the changing concepts of gender identity impact traditional distinctions between men and women,” Gillard said, “we support our chapters as they make individual membership decisions involving transgender students, as they would for any potential member, based on the best interests of the individual and chapter.”

As for Davies, even though he wasn’t asked to join a sorority this recruitment period, he praised Northwestern as progressive for letting him experience the recruitment process.

He wears his sandy blond cut short on the sides, a little shaggier on top. After recently starting hormone therapy, he says his face isn’t as soft as it once was and his voice is becoming more androgynous. He wears a binder to flatten his chest but hopes to get top surgery, the surgical removal of breast tissue, in March.

While he identifies as a man, he said that’s only when society requires that he pick a gender, because his gender doesn’t fit neatly in one of two categories.

In early December, a few weeks before Davies started recruitment, the university’s Panhellenic executive board pledged to support “members of our community who ascribe to non-traditional forms of gender expression” in a letter published in The Daily Northwestern.

While sororities were historically founded to be women’s spaces, Northwestern Panhellenic President Nina Seminara said she feels they should expand their concept of what womanhood means and who is able to value and belong in a predominantly female space — especially because there are already sorority members who don’t necessarily “ascribe to the gender binary.”

Davies’ participation in sorority recruitment “deepened the conversations on our campus and kind of challenged what it means to be a woman,” Seminara said, though she couldn’t speculate whether individual sororities would change their guidelines in the future.

“Some international/national chapter headquarters do define eligible members as individuals identifying as women,” she said, “but — thanks in many ways to Adam — I think this is beginning to be a more open conversation among (headquarters).”

Just as sororities were established to give women a safe space in a patriarchal system, Davies believes they should now strive to provide that same kind haven to anyone marginalized for not fitting typical gender norms.

“I believe, over time, the gender of these organizations will fade,” he said. “I hope.”