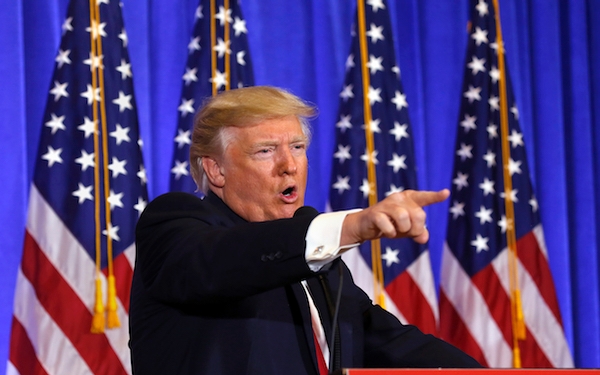 This new direction comes at a price. While executive orders that call simply for expedited reviews will cost relatively little, others would require Congress to come up with the money to pay for their implementation.

Here are Trump’s first-week initiatives and the potential costs associated with them.

Trump’s first executive order directed the government to roll back the individual mandate of the Affordable Care Act, which requires most people to carry health insurance, a signature component of President Barack Obama’s health care law.

Trump’s order offers his administration leeway in defining an “essential health benefit” or “burden,” which could change premiums and potentially create uncertainty in insurance markets, but because the order is restricted by the “maximum extent permitted by law” — and the ACA is indeed law — the immediate effects are severely limited.

Trump also reinstated the Mexico City abortion rules, which mandate that U.S. international funding not provide, promote or include counseling that includes language on abortion services or present abortion as a “method of family planning.”

Since 1973, the Helms amendment has banned the U.S. from funding abortion as a method of international family planning, but the language behind the Mexico City policy means some organizations will still lose funding.

On Wednesday, Trump fulfilled a campaign promise by officially withdrawing from the proposed trade deal. Estimates vary on whether this saved America money and jobs or cost it potentially huge returns.

TPP critics, such as advocacy group Public Citizen, warned that if the United States signed on to the pact, the Asian partners would see their trade surpluses widen at the expense of U.S. jobs and lower wages for American workers. Independent Vermont Sen. Bernie Sanders and his Democratic followers tend to agree. A U.S. International Trade Commission report projected the TPP would drive the global trade deficit up $21.7 billion by 2032.

Supporters, such as the Peterson Institute for International Economics, expected strong export growth of $356 million annually by 2030 and income growth of about $1,000 per U.S. household from expanded trade and lower costs of products. The U.S. Chamber of Commerce says Trump pulling out of the trade deal negates a potential increase of $141 billion in annual incomes and $357 billion in annual exports by 2030.

Trump’s federal hiring freeze is intended to prevent a bloated federal bureaucracy from getting any bigger, though the number of executive branch employees has been stuck at about 2 million for decades.

The American Federation of Government Employees, a government workers’ union, warns that the freeze might increase lines at Social Security offices and result in fewer workplace safety inspections. Already the freeze is forcing veterans, who make up a third of the federal workforce, to reschedule or cancel prospective job interviews.

In 1982, the Government Accountability Office looked at freezes under Presidents Ronald Reagan and Jimmy Carter and concluded that they’d disrupted much-needed government services and raised costs in the end. Conservative organizations such as the Heritage Foundation say government workers enjoy a premium in compensation over private-sector workers and argue that benefits for future government workers should be reduced before government hiring resumes.

On Tuesday, Trump signed executive actions on infrastructure regulations. Two simply call for expedited reviews on environmental and manufacturing regulations. One mandates that all new or retrofitted U.S. pipelines use U.S. materials. The remaining two ask the companies behind the Dakota Access Pipeline and the Keystone XL Pipeline to resubmit building proposals.

Since both pipelines are private investments, the orders won’t cost the government anything directly, although the Morton County Sheriff’s Department in North Dakota estimates the anti-Dakota pipeline protests at the Standing Rock Sioux Reservation cost taxpayers $22.3 million.

Requiring private companies to use specific domestic materials, however, could spawn lawsuits over treating foreign companies differently from U.S. ones.

Trump’s immigration plans could easily cost the most money.

Congressional testimony from an Immigration and Customs Enforcement official in 2011 estimated it costs an average of $12,500 to arrest, detain and remove an individual from the United States, though the number would vary depending on proximity to the Mexican border. Trump’s order specifically calls for prioritizing the removal of immigrants in the country illegally if they’ve been charged with criminal offenses, “abuse” programs for public benefits or are seen to pose public safety or national security risks. Detaining and deporting all of the approximately 11 million immigrants in the country illegally would cost roughly $137.5 billion.

In a 2017 Department of Homeland Security budget request, ICE requested $2.2 billion to maintain 31,000 detention beds, with the average cost of adult detention estimated at $126.46 a day and family detention beds at $161.36 a day. That annual expense would rise as increasing numbers of immigrants are detained while awaiting trial and more detention centers are constructed.

Estimates vary on the cost of Trump’s favorite campaign promise, partially because the president’s description of the size and type of wall has shifted over time. That the roughly 2,000-mile border between Mexico and United States extends through different types of topography doesn’t help.

Nearly 700 miles of fencing was already installed at the U.S.-Mexico border following the Bush administration’s Secure Fence Act of 2006. The cost of that portion of fence was $2.4 billion, though some have argued it wasn’t reinforced properly.

A 2009 Government Accountability Office report estimated the cost of pedestrian fencing at $2.8 million to $3.9 million per mile, bringing the cost between $5.6 billion and $7.8 billion to install along the entire border. Another puts the cost of a 40-foot-high concrete wall at $25 billion. Senate Majority Leader Mitch McConnell, R-Ky., said Congress was moving forward with a plan and estimated the cost at $12 billion to $15 billion.

According to the Migration Policy Institute, these estimates likely underestimate the true costs of building up our border. Most of the fencing that’s already been installed is in or near urban areas. Developing more remote stretches of the border that are mountainous or lack roads would cost significantly more.

Additionally, these costs neglect the price of private land acquisition and maintenance, which one report estimates could take an additional $750 million a year. Simply positioning security forces at the wall could cost another $1.4 billion.

The Trump administration has floated at least one proposal to pay for the wall through a 20 percent tax on Mexican imports. As several experts point out, this would effectively put the tax back on average Americans, who would have to pay higher prices on food and goods brought in from Mexico.

Friday evening, Trump signed a memorandum ordering a review of readiness conditions, training and modernization efforts by the Department of Defense. As part of that memorandum, Trump called for a Nuclear Posture and Ballistic Missile Defense Review to ensure the U.S. “nuclear deterrent” is “appropriately tailored to deter 21stt-century threats” and identify ways of strengthening missile-defense capabilities”

On its face, this memo doesn’t cost anything, but the Congressional Budget Office estimates that plans for nuclear forces will cost about $35 billion a year, or $348 billion from 2014 to 2023. Independent plans put the cost of maintenance and modernization of all nuclear equipment as high as $1 trillion over 30 years.

Trump also signed an executive order Friday on one of his most controversial policies: banning refugees from seven Muslim-majority countries for 90 days. Given that refugees already go through an extensive screening process to enter the United States — especially Syrians — adding another checkpoint earlier in the process could improve efficiency.

The Pew Research Center found that slightly under 39,000 Muslim refugees came to the United States in 2016, making up 46 percent of all the refugees for last year. Resettling a refugee usually involves granting medical assistance, a small allotment of spending money and job training. According to the State Department, the anticipated budget for refugee resettlement in 2017 is $1.54 billion.