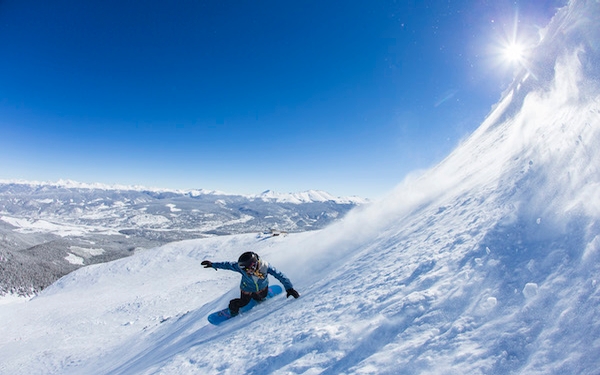 Snowflakes floating from a gray sky tickled my face and sent a chill up my spine.

I snuggled closer to my husband, our legs dangling from the lift at Colorado’s Breckenridge Ski Resort, where fresh snow softly dropped onto tree branches and formed a fluffy white blanket below as we inched higher and higher up the mountain.

“I’m sooo cold,” I said slyly as I laid my head on his shoulder.

He smiled at the inside joke, a flashback to a simpler time in our relationship: before kids, before marriage, before a mortgage and all the other life stresses that had consumed us of late.

Seven years ago, on our third date, we headed to the slopes of Mountain High, a small resort an hour and a half from Orange County, Calif., for a night session on fresh powder. He, apparently, didn’t know it was a date and thought I just wanted a friend to hit the slopes with. And he, apparently, didn’t realize how sexy I thought his snowboarding skills were as we rode together between the trees.

So I scooted closer to him on the lift and declared that I needed warming up, an invitation to wrap his arm around me. That night, we shared our first kiss.

While most of our weekends are consumed with surfing, snowboarding is a close second when winter months roll around. We’ve surfed and snowboarded in the same day, taken quick weekend getaways to nearby Big Bear, or made the longer trek to Mammoth Mountain.

We sighed with sadness when we realized last year our snowboard gear had collected dust all season. Having our second child, our sweet Liliani, just before winter made it impossible.

So when my husband, Jon, editor for action sports website GrindTV, told me about a trip he had to take in early December to Breckenridge for the Dew Tour festival, I let out a desperate plea.

“Can I come?” I asked, glancing at my year-old daughter, her blond hair covered in green broccoli bits, and my son, Kai, a high-energy 3-year-old who has the opinion and will of a wild teenager, refusing to eat his.

Don’t get me wrong, I love my kids. But any parent with two young children will tell you that sometimes you just need a break from the crying and screaming and servitude that come with being a mom. And thankfully, gracious grandparents allowed us to make our getaway.

The flight from Orange County was easy, a 2.5-hour jaunt into Denver. With snow in the forecast, and we being native Californians who freak out about driving in any kind of weather, we opted to hitch a ride with Colorado Mountain Express.

As we got closer to the mountain, the snow really started to come down, with inches-thick drifts forming on parked cars we passed. We were just about jumping out of our seats at the sight of fresh powder.

A passenger in the caravan had a tip for us as we arrived at the DoubleTree hotel, known for its sinfully delicious, warm, chocolate chip-walnut cookies at check-in.

As we walked across the snow-covered street, arm in arm, it felt like we were dating again. We drank beer while playing pool, relaxed, with no children to tuck into bed.

The next morning, we woke to a winter wonderland — the storm had brought about half a foot of new snow, and the town was buzzing about it.

“You scored,” said a shuttle driver, who dropped me at the gondola to catch a ride up to the mountain. “It’s been a rough start to the season; we haven’t had any snow. It should be epic.”

With my husband already on the mountain covering the snowboard competition, I found myself sharing the gondola with local skier Susan Briggs, who was heading up to watch her niece, Keri Herman, in the women’s ski slopestyle event.

It turned out Briggs was an expert on the topic of love on the slopes. After meeting on match.com six years ago, she and her now-boyfriend Dan Herman had their first date on the slopes.

“It’s the perfect first date; you’re doing something you love,” she said. “If you don’t like it, you can say ‘Oh, I missed the run.’”

Which, she admitted with a chuckle, she had done on previous dates.

But with Dan, she knew it was love on first lift.

“We went out there and we had a blast, we just had a wonderful time,” she said.

That got me excited to see my hubby, who was able to sneak away from work long enough to take a few runs with me on the fresh powder.

We felt like our younger selves as we raced down the mountain. He’s always been faster than me, so I tried to match the tracks that formed as his board cut through the powder. He weaved his way down the slopes. I zigged, he zagged.

We stopped, sneaking a kiss as we took a moment to soak in the beauty surrounding us.

His relaxation was short-lived as he got back to work at the Dew Tour event. The festival is like Huntington Beach’s U.S. Open of Surfing — with snow instead of sand, rails and jumps instead of waves, and a lot more clothes covering contestants’ and spectators’ bodies.

A festival area was set up at the base of the hill giving out swag, and fans could get up close to some of the world’s best action-sports athletes as they flipped, turned and slid down the slopes. These are the same athletes you’ll see in the Olympics and X Games, putting on an exciting show on the snow.

I was stoked to catch the men’s slopestyle finals as Canadian Mark McMorris, a well-known figure in the world of jibs and jumps, took the win. The crowd cheered as he stepped up to the podium, sending a rush of energy up the mountain.

Another favorite moment from the festival was when Main Street downtown was shut down for the Streetstyle contest, with old-school hip-hop blaring from loudspeakers as the crowds screamed at the sight of competitors doing tricks snowboarding and skiing in the middle of town.

After that event, we decided on a meal at our hotel in the 9600 restaurant. It was romantically lit, a fine setting for a couple on a getaway. I ordered the salmon, cooked perfectly, skin on and seared crisp on the outside and pink and tender on the inside, accompanied by lemony Brussels sprouts and a celery root puree.

The food options in Breckenridge are endless. One night, we stuffed ourselves silly at Michael’s Italian Restaurant, putting back all those calories we burned on the slopes. The tortellini I ordered swam in a heavy basil cream. I scarfed down every bite, soaking up a bit of sauce with bread.

On our last night we found a meal to satisfy our chilly bones as the snow continued to fall, at a Vietnamese joint called Pho Real that had opened a few months before. The pho had a salty yet satisfying broth filled with white vermicelli noodles, with a choice of meat that can include thin slices of rare beef or chicken, accompanied with fresh herbs like mint or Thai basil and spiked with a jalapeno or two.

Seems we weren’t the only ones who enjoyed hot soup on a cold night, with a line out the door of people putting in their orders.

After warming our souls, we walked slowly through the snow that covered Main Street back to our hotel, where we had to pack our bags to head back to the beach near our home in Orange County.

We knew we’d soon be home, back to the grind and deadlines, picking broccoli out of our kids’ hair. But we’d be re-energized and reconnected in a way only a few days on the slopes can provide for a snow-craving couple in love.

Speed dating on the lifts: Speed dating isn’t a new concept, but doing it while on a lift gives it an interesting twist. Loveland Ski Area in Colorado held a chairlift speed date event in December by the creator of Luvbyrd.com. Participants spend about 10 minutes with each person on the lifts, and there’s an afternoon social hour.

Getting there: Frontier Airlines offers affordable flights out of Orange County, as low as $146 round-trip, but beware of added baggage fees that could cost you more than the flight for a carry-on and one checked bag. Even selecting a seat costs an extra $9 or more. From Long Beach Airport, American Airlines offers flights for $180 round trip and up. Colorado Mountain Express has shuttle service to the mountain for about $65 each way, with drive times of two-three hours. .

Where to stay: You can’t go wrong with the DoubleTree Breckenridge ($199 and up), which is walking distance from ski lifts Quicksilver and Beaver Run. A shuttle will pick you up and drop you off in town at the main gondola that takes you to the ski resort. Three small spas are set outside the hotel to soothe sore muscles after a day on the slopes, and a warmed pool is indoors. There’s also a men’s and women’s sauna for those who really need to warm the bones, as well as a fitness center. And you can’t beat those warm DoubleTree cookies, which the front desk is happy to hand out any time you ask.

Off the mountain: For sore muscle relief, take a yoga class or get a massage. Or do both. Meta yoga studio offers everything from gentle classes to hot yoga, with views of the snowy mountains. Cost is $18 for a drop-in class, with free mats available. For soothing relief and relaxation, there’s Simply Massage, where an hourlong session costs $75.

Must know: The altitude at Breckenridge is about 9,600 feet. Getting used to the altitude can be rough — expect anything from nausea to headaches, fatigue or trouble sleeping, shortness of breath, increased heart rate or a jittery feeling. There’s a reason oxygen bars are set around town, and even though getting a dose of O2 costs more than $1 per minute, it can provide needed relief.