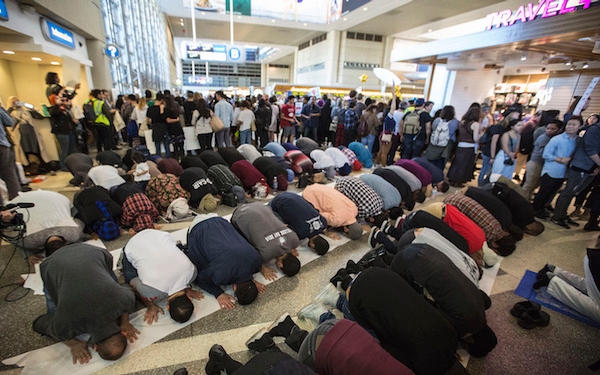 Thousands of protesters converged on Los Angeles International Airport on Sunday to condemn President Donald Trump’s travel restrictions as attorneys filed court papers on behalf of those who were detained at the airport.

Demonstrators shut down traffic in front of the Tom Bradley International Terminal and faced off with police in riot gear, chanting, “Let them in!” and “Love, not hate, makes America great.” After protesters marched around the airport, disrupting traffic, police confined the crowd to the area in front of the Bradley terminal.

Then dozens of protesters sat down, blocking the airport’s busy thoroughfare — World Way — and refused to leave until all detainees are released. Two lines of airport police officers with helmets and batons stood nearby.

Moments before the protesters began their sit-in, the group chanted “not enough” in response to news that the White House had reversed course on the detention of green card holders.

Los Angeles Airport Police Chief David Maggard said there had been no arrests during Sunday’s protests and that police had no plans to order the crowd to disperse. He said traffic was rerouted to the airport’s departure level, one story above street level.

But a short time later hundreds of protesters marched to the elevated roadway that circles the airport and proceeded to block traffic. Dozens of demonstrators sat in a crosswalk chanting “let them go” in a bath of headlights.

Motorist Rebekah Bergeron, 22, was sitting at the head of a line of cars blocked by the protesters. Though she said she didn’t object to their demonstration, she also wanted to get home to Arizona.

“I have no problem if they want to protest this, but I just missed my flight,” she said. “I just watched it take off.”

About 8:30 p.m., Assistant Los Angeles Police Department Chief Michel Moore used a megaphone to repeatedly ask the protesters to move to the sidewalk. He said he was not asking them to leave the airport but too simply clear the roadway in front of the Bradley terminal.

"We do not want to arrest you," he said.

The protesters asked him to demand the release of the detainees in exchange for the protesters voluntarily clearing the roadway. After a brief negotiation, the protesters decided to stay in the street.

Jennie Pasquarella, director of immigrant rights for the ACLU in California, said her advocacy group had filed habeas petitions on behalf of seven people who were detained at LAX on Saturday.

A federal judge on Sunday issued an order instructing federal officials to transport an Iranian man back to the U.S. after he was deported from LAX the day before. The judge cited the “irreparable harm” the man could face as well as the likelihood that his deportation violated the Constitution and the Immigration and Nationality Act.

Pasquarella also said federal immigration officials have been urging some detainees to waive their applications for admission to the U.S., an allegation echoed by ACLU officials in other cities.

It was not clear what detainees were being threatened with, but Pasquarella suggested officials could threaten to deport detained individuals, which could have a long-term effect on their ability to re-enter the U.S. at a later date.

The U.S. Customs and Border Protection agency did not respond to requests for comment.

Lindsay Toczylowski, an attorney and the executive director of the Immigrant Defenders Law Center, said employees with U.S. Customs and Border Protection were not answering questions from lawyers seeking to speak with detainees, including how many detainees there were at the airport.

A law enforcement source told the Los Angeles Times that 13 people had been detained at Terminal 2 on Saturday night but each of them held a green card and was eventually released. It was not clear how long they were detained, according to the source, who could not provide detention figures for the Tom Bradley International Terminal, which has been the center of protest activity.

The source requested anonymity because he or she was not authorized to discuss the situation at the airport.

Jacob Kemper, a 35-year-old Army veteran who served two tours in Iraq, said he was infuriated to think soldiers he fought alongside might be denied entry to the country.

“I really don’t care about religion, but I really hate oppression,” he said, holding a sign that read, “I Fought Next to Muslims.”

Nurse Jamie Shoemaker, 51, of Los Angeles stood at the entrance of the international terminal holding an American flag in one hand and carrying a sign that read, “Muslims are welcome here, racists and fascists are not.”

Shay Soltani, a network engineer, fled the Iranian Revolution 40 years ago and still has family members in Iran. She doesn’t know if she will be able to see them again.

As she and hundreds of others marched through the international terminal Sunday, she said she was horrified by Trump’s order.

“I am so hurt by this,” she said. “He is against freedom of speech and the Constitution and everything I believe in as an American.”

Trump’s executive order suspended refugee arrivals and banned entry to the U.S. from seven Muslim-majority countries. It indefinitely blocked Syrian refugees and barred entry to the U.S. for 90 days for those traveling from Iran, Iraq, Libya, Somalia, Sudan, Syria and Yemen.

On Saturday, after mass demonstrations across the country, a federal judge in New York ordered a halt to deportations of travelers who arrived at airports with valid visas to enter the U.S., saying that sending them back to the affected countries could cause them “irreparable harm.” But she did not rule on the legality of the order.

Roughly a dozen counterprotesters popped up on the street across from the Bradley terminal, holding signs that said, “X-treme Vetting” and “Keep Refugees Out,” saying they were tired of the flow of illegal immigrants into the U.S. that they believe jeopardizes the safety of American citizens.

Chanell Temple, 63, of Los Angeles said she was sick of watching immigrants in the country illegally “steal” benefits and services from American citizens, specifically veterans and homeless persons who need aid.

“They are coming here and taking everything away,” said Temple, a former bookkeeper who said she lost her job and health care after she was fired for an inability to speak Spanish.

Asked what she thought about reports of green card holders, who are legal residents of the U.S., being detained, she said those reports were “lies.”

Raul Rodriguez Jr., the coordinator of a group called America First Latinos, said he was concerned about what he believes is a surge in crimes committed against Americans by immigrants in the country illegally.

“They are lawbreakers. They have violated federal law and they need to be deported.”

Across the street from the terminal, a dozen or so men, women and children put their knees down on rolls of butcher paper for the Dhuhr prayer, the second of five daily prayers for Muslims.

Masih Fouladi, a lawyer and advocacy manager with the Council on American-Islamic Relations, said he was heartened by the positive energy from the crowd.

“It is great to see so many people out in solidarity,” he said.