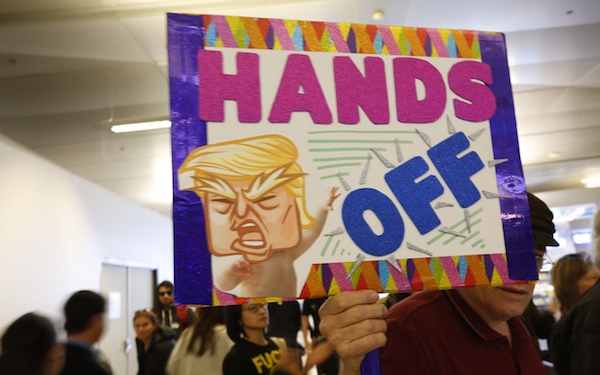 With protesters’ chants echoing through arrival halls and beyond, confusion prevailed Sunday at airports across the United States amid seemingly contradictory signals from the Trump administration over a hotly contested executive order blocking U.S. entry to refugees and nationals of seven Muslim-majority nations.

Even as the White House defended the directive’s rollout as a success, advocacy groups and administration officials remained locked on an apparent collision course. Since its signing on Friday, the measure has led to the detention of more than 100 people landing at airports across the country with valid entry documents.

About twice as many others were denied permission to board flights to the United States, according to lawyers representing a consortium of groups that won a temporary nationwide stay Saturday night against the deportation of anyone who had arrived with a valid visa.

On the ground, backlash to the ban grew. While major international airports were the locus of protests, thousands rallied in cities including Los Angeles; Washington, D.C.; Philadelphia and Boston.

Despite the air of gravity surrounding debate over the ban, the atmosphere at many airport rallies was raucous and cheerful. Whenever anyone was released from detention, he or she was greeted with cheers and applause from well-wishers.

At Los Angeles International Airport, thousands of protesters filled the lobby at the Tom Bradley International Terminal and spilled into the street outside, chanting, “Let them in!” and “Love, not hate, makes America great.”

Jacob Kemper, a 35-year-old Army veteran who served two tours in Iraq, said he was infuriated to think soldiers he fought alongside might be denied entry to the country.

“I really don’t care about religion, but I really hate oppression,” he said, holding a sign that read, “I Fought Next to Muslims.”

Shay Soltani, a network engineer, fled the Iranian revolution 40 years ago and still has family members in Iran. She joined Sunday’s protest in Los Angeles, she said, because she doesn’t know if she will be able to see them again, thanks to Trump’s order.

“I am so hurt by this,” she said. “He is against freedom of speech and the Constitution and everything I believe in as an American.”

Groups including the American Civil Liberties Union said they would ultimately press to have Trump’s order overturned as unconstitutional.

In the meantime, the emergency stay issued by a federal judge in Brooklyn on Saturday represented an “absolute baseline” prohibiting the removal of any of those who were halted upon arrival, said Lee Gelernt, the deputy director of the ACLU’s Immigrants’ Rights Project.

But it remained essentially the luck of the draw in terms of who was halted upon arrival, who was released after questioning, and who had access to legal counsel if detained, the lawyers said.

“There’s no method to this madness,” said Becca Heller, director of the International Refugee Assistance Project, one of the groups that filed the legal challenge in New York.

For some, the directive’s second full day brought a reprise of anxiety and heartbreak from the day before. Hind Mohamed traveled to New York’s John F. Kennedy International Airport from New Jersey with her family, hoping to greet her mother, a green card holder traveling from Sudan.

Her mother’s flight had been on the ground an hour, but there was no immediate sign of her. “I’m just nervous,” Mohamed said, teary-eyed.

Her 16-year-old son, Awab Hassan, offered a teen’s unvarnished take on the executive order, saying it lumped together terrorists and innocent people.

“That’s not justice — to see this country devolve, I’m not proud of that,” he said. “Where’s the feeling of taking people in, sharing the American dream?”

Some turned-away arrivals eventually got through the net, with a combination of luck, ingenuity and a timely legal assist.

Vahideh Rasekhi, a 32-year-old Iranian linguist, was put aboard a flight in New York to head back to Tehran via Kiev, Ukraine. But because she was able to contact volunteer attorneys via smartphone — even as the plane was taxiing toward takeoff — a close call turned to triumph.

Even as a trickle of freed detainees gathered pace, the vigils were nerve-racking. In a haze of cigarette smoke, two Iranian friends paced a curb outside a terminal at Kennedy airport. One of them, a green card holder from Iran, had just heard that his wife, also a permanent resident, would face up to five more hours of questioning after returning from a family visit. Inside, a Turkish woman waited for her brother, worried about his rudimentary English.

Los Angeles City Attorney Mike Feuer, who spent the early hours of Sunday at LAX, said a woman approached him to express fears for her elderly father, who was detained and suffered from Parkinson’s disease.

“It is those kinds of real stories that are at stake because of this outrageous action” by the Trump administration, he said. “It is time not only for officials in my position, but all Americans, should find this a breathtaking violation of rights.”

Among immigration activists, exchanges pinged about where best to take one’s chances. At Chicago, there was said to be greater leniency in releasing those initially detained. In Boston, where a judge’s order appeared to guarantee landing rights to anyone with a valid visa during the coming week, legal observers were watching for a potential increase in arrivals.

As anguish mounted among families uncertain of loved ones’ fate, the Trump administration insisted enforcement of the president’s directive would be unaffected by a flurry of court rulings temporarily forbidding deportation of those who arrived with valid visas.

“Prohibited travel will remain prohibited,” the Department of Homeland Security said in a statement, adding that the government retains the right to revoke visas on national-security grounds. The directive blocked all refugee arrivals for 120 days — refugees from Syria are blocked indefinitely — and suspended entry by people holding passports from Syria, Sudan, Somalia, Iran, Iraq, Yemen and Libya.

Later, Homeland Security officials clarified that the green card holders from the affected countries would face additional checks when returning from trips abroad, but suggested they would not be denied entry unless a problem arose. That reversed indications a day earlier that the ban would include them.

Republicans, who initially lent tacit support to the directive, began distancing themselves Sunday.

A day after House Speaker Paul D. Ryan was one of relatively few Republicans to voice an active defense, two Senate GOP heavyweights — Arizona’s John McCain and South Carolina’s Lindsey Graham — weighed in with a strongly worded joint statement warning against a “self-inflicted wound in the fight against terrorism.”

“It is clear from the confusion at airports across our nation that President Trump’s executive order was not properly vetted,” the statement said, in a pointed reference to Trump’s repeated contention that despite a rigorous existing security process, arrivals until now have not been properly “vetted.”

“Our government has a responsibility to defend our borders, but we must do so in a way that makes us safer and upholds all that is decent and exceptional about our nation,” they said.

Via Twitter, the president delivered an angry and somewhat puzzling riposte to the two senators, calling them “sadly weak on immigration.” He added that they “should focus their energies on ISIS, illegal immigration and border security instead of always looking to start World War III.”

Trump had earlier tweeted Sunday saying the U.S. needs “strong borders and extreme vetting, NOW.” The president also decried what he called a “horrible mess” regarding immigration in other parts of the world, including Europe.

European leaders have expressed shock and dismay over Trump’s directive, and some U.S. allies were taken aback by the blocked entry of their own nationals with dual passports from one of the affected countries in the presidential order. British news reports said Foreign Secretary Boris Johnson had received White House assurances that the restrictions would apply only to dual-national British passport holders who were traveling from a country on the list.

Immigration advocates and the Trump administration offered dramatically clashing narratives as to the first full day’s rollout of the executive directive. The Department of Homeland Security said fewer than 1 percent of international arriving travelers on Saturday had been “inconvenienced” by the president’s directive.

Lawyers countered that some enforcement went far beyond national security considerations, citing the blocked entry of a 2-year-old U.S. citizen with parents who held green cards; and an active-duty U.S. military officer whose arriving elderly mother was detained.

“A lot of people are being handcuffed, and people who don’t speak English well are being coerced into taking voluntary departure,” said Heller of the refugee group.

Legal opposition to the directive expanded beyond the court system. Attorneys general from the District of Columbia and 15 states denounced the executive order as unconstitutional, declaring that no one should be targeted because of national origin or faith.

But some travel sagas ended in joy and relief.

Stella Ava of Cleveland, a Syrian-born green card holder, was visiting relatives in Turkey when the executive order took effect.

She feared being prevented from boarding her flight or detained upon arrival at Kennedy airport, but told her waiting husband she had sailed through border controls after a few perfunctory-seeming questions.

“Thank God,” she said, and tightly hugged her children. “I was so worried.”