Oscars’ Trump dilemma: Should nominees speak out about the new president? 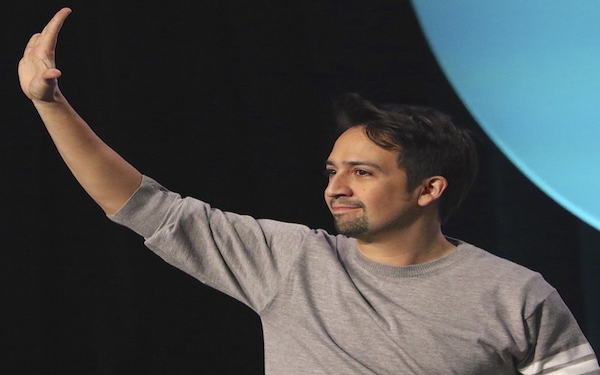 Lin-Manuel Miranda waves to the audience before being interviewed onstage at the "People En Espanol" Festival on Oct. 16, 2016 in New York City, N.Y. (Staton Rabin/Zuma Press/TNS)

When Emma Stone, Denzel Washington, Ryan Gosling and the rest of this year’s Academy Award nominees get ready for the big night, they will reckon with the perennial questions that have faced every Oscar nominee for time immemorial: what to wear, who to bring as a date, who to thank if they win.

But this year, there will be a potentially vexing new question as well: what, if anything, to say about Donald Trump.

If last year’s awards season chatter was dominated by the roiling #OscarsSoWhite controversy, the elephant in the room this year has been the ascent to the presidency of a man whose candidacy few in Hollywood supported and whose victory even fewer saw coming.

At every turn — on red carpets and late-night talk-show couches, at film festivals, premieres and awards shows, on social media platforms and in protest rallies — many across the liberal-leaning industry are wrestling with how to speak publicly about a president they may bitterly oppose and a political landscape that seems to have radically changed overnight.

“If you’re in the radius of the earthquake, you absorb the shock of it and then you try to orient yourself and figure out what this new world looks like,” actor and director Ben Affleck, who supported Hillary Clinton, told The Times last month. “I definitely went through that with the Trump election. I was surprised. I thought she was going to win like everybody else. Everyone was totally wrong and you go, ‘How does that happen ?’”

Some in Hollywood have embraced the chance to stake out full-throated opposition to Trump, establishing a new beachhead in the latest flare-up of the culture wars that had largely quieted during the Obama years. That Trump drew fire for his comments on women and minorities throughout the campaign has, for many, changed the calculus of celebrity activism, making speaking out a moral imperative.

But sharing one’s political opinions while, say, accepting a gold-plated statue has always been tricky business under the best circumstances. (Ask Vanessa Redgrave. Or Marlon Brando, who famously sent Native American rights activist Sacheen Littlefeather in his place in 1973.) And in this climate of rancor and deep division, it can reap an especially fierce blowback.

While some feel compelled to use their public platform as a means of political resistance, no matter the potential consequences to their career, others believe it can be counterproductive, reinforcing the notion that Hollywood lives in its own self-satisfied bubble.

Last Sunday, after millions marched in protests around the world — including stars such as Scarlett Johansson, America Ferrera, Janelle Monae and Madonna — Trump amplified this notion, tweeting “Celebs hurt cause badly.”

The fact that Trump is himself, in many ways, a creature of the entertainment industry, able to leverage his own celebrity and skills as a showman, makes him that much more formidable an adversary.

There are those, such as filmmaker Ava DuVernay, who believe that the best way to resist the new president is to simply concentrate on creating work that reflects their own values.

“I refuse to spend the next four years living in that man’s head,” DuVernay told The Times recently at an event in Los Angeles celebrating her Oscar-nominated documentary about race and the criminal justice system, “13th.”

“One day it’s Meryl Streep, the next it’s (Rep.) John Lewis,” said the filmmaker, who also directed the 2014 civil rights drama “Selma.” “If I spend my time focusing on that spectacle of distraction, it will diminish me. What I need to do is to live fully, move forward and make the art that I want to make.”

Not that that will stop awards show hosts from going after Trump — for them, the president is simply too big and juicy a target to resist. Jimmy Fallon called out Trump recently at the Golden Globes, and Jimmy Kimmel, this year’s Oscar host, laid into him when he hosted the Emmys in September, blaming “The Apprentice” producer Mark Burnett for helping launch Trump. (“Thanks to Mark Burnett, we don’t have to watch reality shows anymore, because we’re living in one,” Kimmel quipped.)

But it’s one thing for a late-night talk show host or comedian to go after Trump and quite another for A-list actors to openly wear their politics on their sleeves.

“The country is pretty divided down the line, so you’re going to run the risk of there being a public outcry if you’re in a campaign for anything, whether it’s dogcatcher or an Oscar,” said one publicist who has worked on numerous Oscar campaigns and declined to speak on the record because of the sensitivity of the issue. “A lot of these people want to avoid controversy of any kind in the press. If you’re asked what you think about the current political situation, you’ve got to weigh what it means in Hollywood versus what it means in the rest of the country.”

That divide was starkly revealed earlier this month when Streep took the stage at the Golden Globes ceremony to deliver an impassioned speech decrying what she called Trump’s tendency to “bully others.” Though Streep’s words were met with cheers from the crowd in attendance — not to mention many viewers watching at home — numerous conservative commentators and supporters of Trump quickly dismissed the actress as an out-of-touch Hollywood elitist.

The next day, Trump himself blasted Streep on Twitter as “one of the most over-rated actresses in Hollywood” and “a Hillary flunky who lost big.”

On the flip side, Nicole Kidman drew fire recently when, in a recent BBC interview about her new movie “Lion,” she said of Trump: “He’s now elected and we, as a country, need to support whoever’s the president because that’s what the country’s based on.” After her comments sparked outrage among some on the left, Kidman clarified in a subsequent interview that she had been simply “trying to stress that I believe in democracy and the American Constitution.”

For public-relations reps responsible for helping celebrities nurture and maintain their images, advising clients on how to navigate the minefield of this new political reality can be difficult.

“It’s a personal decision,” one publicist said of stars expressing their views on Trump. “But would I recommend it? Of course not. At this point, with social media being as venomous as it is and trolls being who they are, I don’t think you can basically be safe with your opinions anymore. It’s a dangerous time. … Even Meryl Streep and George Clooney want to work. They don’t want to be considered liabilities.”

Actress Zoe Saldana told an Agence France-Presse interviewer earlier this month she believes that Hollywood unwittingly helped to elect Trump by alienating a large swath of Americans. “We got cocky and became arrogant and we also became bullies,” she said. “We were trying to single out a man for all these things he was doing wrong … and that created empathy in a big group of people in America that felt bad for him and that are believing in his promises.”

Director Peter Berg, who helmed the recent ripped-from-the-headlines films “Deepwater Horizon” and “Patriots Day,” argues that Hollywood is too often out of touch with the type of people who supported Trump who, broadly speaking, live in what the industry considers flyover country.

“‘American Sniper’ made almost $400 million — do you think anyone saw that coming? A movie about an extremely conservative Republican Navy SEAL who kept a record of how many Taliban he killed?” Berg said in an interview with The Times last month, referencing director Clint Eastwood’s runaway 2014 hit.

That said, Berg said he personally makes an effort to steer clear of overt politics in his work and outside of it. “I accept that Trump won the presidency and I’m going to deal with it, and I would have accepted if Hillary won,” he said. “Guys that I know, we’re too busy working to get involved in this. We’re making stuff. I’ve got work to do.”

Some minority actors and filmmakers in particular lament that they are asked to address questions of race and politics disproportionately compared with their white counterparts — especially this year, as Trump’s rise has heightened tensions around issues of diversity and discrimination.

“Fences” star Viola Davis said that because the film, which is adapted from August Wilson’s Pulitzer Prize-winning play, has an almost entirely African American cast, people often try to make race its central subject as opposed to broader issues of family dynamics and working-class struggle that the film explores.

While Davis doesn’t shy away from talking about politics, she argues that those larger conversations often become problematic when they’re reduced to sound bites or hashtags.

“I’m just not a political statement,” Davis said. “I’m messy too. I fall short all the time. I’m a human being. And a lot of times I feel that’s the best message I can put out there.”

For her part, DuVernay hasn’t done many interviews to promote “13th,” believing that the documentary speaks for itself. She wants people to have their own conversations about the film, unfiltered as much as possible by her personal political views.

“Take it for what it is,” DuVernay said. “I said my piece, and now I’m going to keep on living and keep on trying to survive in an environment that is so toxic. Everyone has to find their way forward. I’m not saying that my way is anyone else’s way. My way is going to be telling stories that amplify the parts of humanity that I think we should be celebrating and saluting.”

Though in the past he has been one of the industry’s most outspoken liberal voices, Affleck said he personally has lost some of his appetite for politics. “I’ve grown leery of being involved in politics too much,” he said. “I’ve found that it’s kind of a sleazy game, mostly about raising money. I’ve come away feeling more depressed about the world than when I got involved to begin with.”

Still, as Hollywood tries to figure out its place in the new Trumpian era, he said it’s important to stay engaged, whatever form that engagement takes.

“You have to have a good relationship with the audience,” he said. “You have to be mindful of the audience. As a filmmaker, you don’t want to be out of touch with what’s going on in the world. That’s actually the worst thing that can happen to you.”

The fact is, as the Women’s March last weekend made clear, resistance to Trump has become something of a crusade for many on the left.

And while it remains to be seen how politically charged this year’s Oscars ceremony will become, there are few platforms bigger than the Academy Awards stage from which to send a message.

One thing seems safe to predict: Come Oscar night, if “Hamilton” creator and star Lin-Manuel Miranda — a best song nominee for the film “Moana” — has the chance to share his political point of view with an audience of millions, he’s not throwing away his shot.