Finally, Kings of Leon riding a No. 1 album debut 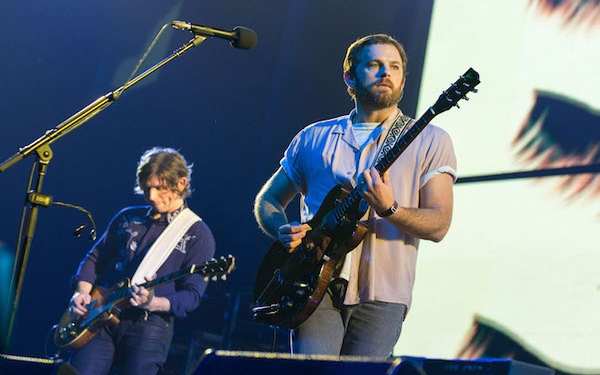 Matthew Followill and Caleb Followill from Kings of Leon during the KROQ Almost Acoustic Christmas concert at The Forum on December 10, 2016 in Inglewood, Calif. (Daniel DeSlover/Zuma Press/TNS)

It took 17 years and seven studio albums, but Nashville’s Kings of Leon finally landed their first No 1 album when their latest release, “Walls,” dropped in October.

“We were more shocked than anything,” says co-founder and drummer Nathan Followill. “We were just glad Lady Gaga waited a week to put her record out.”

The group (brothers Nathan, Caleb and Jared Followill and cousin Matthew Followill) came up in the early ‘00s, part of a wave of post-Strokes rock bands. They sold millions of albums and had a string of hits (“Sex on Fire,” “Use Somebody”) before frontman Caleb Followill’s onstage meltdown in 2011 led to a forced hiatus. Their post-break releases (including 2013’s mostly unloved “Mechanical Bull”) have been among their most successful.

In a phone interview, Nathan Followill talked about life in one of the only arena rock bands left standing.

The following is an edited transcript of that conversation:

Do you guys see each other during your off time?  We all live less than 2 ½ miles apart from each other, so we see each other quite a bit when we’re off the road. Me and Caleb and Matthew, all three of our kids are in the same class at Montessori school, so if it’s not a family get together, we usually see each other at school outings and stuff like that. We all take our time away from each other when we need to, but that usually doesn’t last too terribly long.

Going into the studio, you’re coming off an album that maybe wasn’t your favorite.  I would say we had rushed into making “Come Around Sundown” and “Mechanical Bull” pretty quickly after our most successful record. Record number seven, it was the opposite. Most people think you would put a lot of pressure on yourself coming off a record you weren’t as excited about as the others. Actually, “Mechanical Bull” did amazing, it was our second most selling record, I think? But going into “Walls,” we kind of did the opposite. It was like, don’t put pressure on ourselves to re-create the magic that was on previous records that got us accolades and awards. It was our last record on our record deal at that time, so we just went into it like we had nothing to lose.

You went in with a producer who seemed like he was hard on you, in a way you weren’t used to.  Yeah, Markus (Dravs), he took a little bit of getting used to, because we had done all our previous records with Angelo (Petraglia), who was our mentor and our buddy, he kind of was the fifth member, and would get us all together if we were all over the place. At first, it seemed tough. (Dravs), he’s German and lived in Liverpool, which is about as opposite of Tennessee as you can get. The language barrier was such a huge thing for us. … He definitely pushed us harder than we’ve ever been pushed making a record.

When you’re in a famous band, people probably don’t speak to you sharply.  Oh, totally. Going into this record, we were like, “We’ve been surrounded by yes men for our whole entire career.” It was like musical boot camp for us, but graduation day was oh so sweet.

When the album does well, it must be even sweeter, because rock in general isn’t doing well.  Oh my God, yeah. You never want that in the back of your mind going into making a record, (that) we have to compete with Beyonce or Rihanna, these huge pop acts. You have to sit down and realize that it’s a totally different world from rock. Rock is not what it used to be. You’re not having rock bands sell millions of records like they did 10, 15 years ago. It’s almost a blessing in disguise, because it takes that pressure off you.

A recent article suggested you could be the last rock band to get famous, just as a basic four-piece.  You really realize it when you go play festivals, and you look at who’s playing with you, and who was with you at the festival before that. As the years go by, it just amazes us, because there were so many great bands when we came out. It was such a bright, hopeful time for rock ‘n’ roll. We were like, “This is our time. Rock ‘n’ roll is about to take over.” But it just slowly faded away.

It seems like a terrible pressure to put on yourselves, to be in a band with your family members. Your family, your livelihood, your dreams, everything’s tied together, and one big fight could end everything.  For some family bands, for sure. For us, I don’t ever really see that happening. It’s part of the way we were raised. Our dad was a traveling minister, so our whole lives we’ve been stuck together in the back seat of a car, in hotel rooms. We’ve always been together. It’s not one of those things where we all went to high school, and I had my group of friends I hung out with, and my little brother had his group of his friends. We never got the chance to have our own lives, to create our own individual identities as kids. The beauty of being a family band is you know what buttons to push, obviously, but you get over a fight just as quick as you start one. You’re like, “OK, are we going to break up the band over a fight? Seriously?” I know how much our families rely on this. I think as we’ve gotten older and have families now, we take it a lot more seriously. No one wants to be the one person that’s responsible for the band breaking up.

Looking back on it, are you glad that your bad period was public? Did it force you to confront stuff you wouldn’t have had to confront?  Yeah, that was something that was going to happen no matter what. We had literally pushed ourselves so hard, and coming off the hills of our most successful record and trying to re-create that, not only the pressure we’d put on ourselves but (from) everyone around us, when all that went down, it was actually a relief. We were like, OK, finally, this forces us to take a step back and evaluate where we are in our lives. Most people read articles (saying) the band was broken up, and we’d all be texting each other on a group texts, like, “Did you read that? That’s hilarious.” We really just thought it was funny, because we knew we weren’t breaking up. We knew we were going to make more music.

It sounds like you wouldn’t go back.  We’ve gotten older and more mature. We don’t fight any more, we’re respectful of the process. We’re so grateful that seven records in, we’re still able to do this. We’re just so happy that we get to do what we love. It’s a good time to be a king.