Behind the Tattoos With: Tom Berg 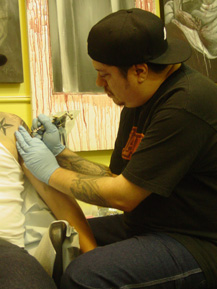 While celebs get all the credit for art performed in front of the camera, many of the hardest working artists in the industry prefer to hide behind the scenes, deep within the shadows of a makeup trailer and away from the chaos of Hollywood.

Ten years ago artist Tom Berg embraced another medium, adding the buzz of his tattoo machine to the scratch of his pencil and the wisp of his paintbrush. Today, he not only etches his artwork into the skin of San Pedro customers but he's unexpectedly fallen into the film industry by drawing tattoos for movies and television.

“I see a lot of people struggle in the industry and I don't envy it,” Berg says. “I'm pretty un-Hollywood so it's good for me because I can get in, just do my thing and get out.”

His first piece was a set of devilish horns for the movie Red Dragon in 2002, a prequel to Silence on the Lambs and since, his highly acclaimed work and positive attitude has brought much more work his way.

Through working on Red Dragon , Berg met producer/director, Brett Ratner ( Rush Hour , After the Sunset ). Berg says they got along really well and when Ratner got the call to work on the hit Fox show “Prison Break”, he asked Berg to come along for the ride.

“He's the type of guy that when he sees something, he knows it will work,” Berg says. “I didn't realize that he was so particular and I respect that.”

Ratner continues to include Berg in his projects with X-Men 3: The Last Stand . For this project Berg designed tattoos for many of the mutants as part of an elaborate makeup department. Tons of tattoos, prosthetics, creative makeup and hair designs will be seen in this installment of the X-Men trilogy.

His main and most challenging piece was for the mutant, Callisto (Dania Ramirez). His original design was a facial tattoo but once they tried it out on the petite actress, Berg says it ended up looking “like a silly Batman mask.” After flying out to Canada and spending hours with the makeup department head, Kris Evans and Ramirez, he came up with a decorative rod iron design for the side of her face.

“I wanted something strong but not too tribally because that looks guyish,” Berg says. “I wanted it unique, not like a typical street fighter look.”

Berg also designed Callisto's arm band and the omega symbol on her chest. Also displaying Bergs challenging artwork will be Maxwell Jordan aka Quill (Ken Leung) with a huge Asian architectural piece that flows from his chin onto his throat.

The last character to flaunt Berg's designs already has many real tattoos herself. Actress Omahyra Mota plays Philippa Sontag aka Arclight and will sport Berg's work on the side of her dainty neck

“Brett sent me some pictures and then we went to dinner and I just drew designs on some napkins,” Berg jokes. “I know it sounds cheesy.”

Berg's talent has kept him quite busy. His upcoming projects also include designing tattoos for The Reaping , starring Hilary Swank. Berg looks forward to watching his creations come to life on the big screen. “I'm not gonna quit tattooing, ever, unless I lose an arm or something.”