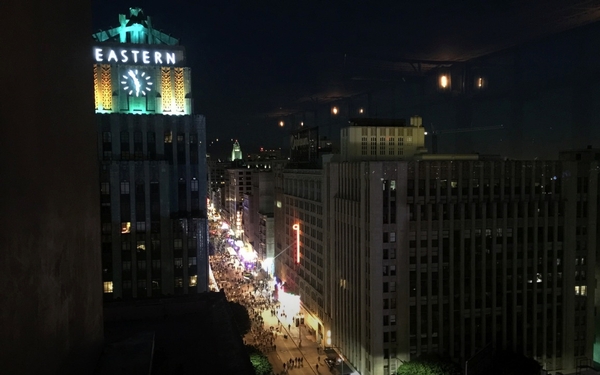 Before reading this article, pull up the calendar on your smartphone and schedule in Night on Broadway festival, January 27, 2018 from 4PM to 11PM. If you haven’t been to this event before, I promise, you will not be disappointed. The festival is one of the hottest events to attend in Los Angeles. I stumbled upon Night On Broadway in 2015 and returned this past weekend for a second visit. The event is a free arts and music festival that takes place on Broadway Avenue in Downtown Los Angeles.  Broadway was a retail and entertainment hub in the early part of the Twentieth Century but after World War II it began to decline steadily as Angelenos relocated and their entertainment needs changed.  Nine years ago, Councilman, Jose Huizar, who represents the area started a Bringing Back Broadway Economic Development Initiative. The goals of the initiative are to provide economic development and business assistance; re-activate Broadway’s historic vacant theaters, as well as more than one million square feet of vacant commercial space in the area.

In 2014, the city of L.A. produced a “Day on Broadway” event to celebrate Councilman Huizar’s initiative. The event showcased the area and was attended by over 3,000 individuals. Recognizing they were on to something, the organizers expanded it into a festival that evolved into a Night on Broadway, which drew over 35,000 people in 2015, 60,000 people in 2016 and 70,000 people this year.

What makes this festival so special is that the organizers close off Broadway and allow people to walk in the middle of the street and admire the architectural styles of the buildings that range from Beaux Arts, Italian Renaissance to Art Deco. In addition, the glittering movie palaces on Broadway are opened to the public in order to see their beautiful interior designs while scheduled programming of films, live show performances and DJs take place during the course of the evening.  If you don’t want to drive into the city, take the Metro. The Purple Line’s Pershing Square stop is right across the street from Grand Central Market and a block from Broadway.

This year’s activities did not disappoint.  I started the evening with my wife at the Grand Central Market  located at the north side start of the festival.  As we walked south along the festival route, we came across plenty of food trucks and art installations that were peppered throughout the area.  The side streets were blocked off and zoned for various themed activities. The “DTLA Proud Block Party” area was by far the most lively and outrageous.  For example, besides the pulsating music beats played by guest DJs, a drag queen was featured at a 5¢ Psychiatric Advice Booth - straight out of the Peanuts cartoon. Further down Broadway, KCRW hosted a silent disco on a side street where guests wore illuminated headphones as they danced.  We caught a high energy concert by The Spazmatics on the Olympic Stage where the festival route ended and then started working our way back north on Broadway.  We stopped at the Ace Hotel, had drinks on the rooftop bar while looking out at the city landscape and all the people down below on Broadway.  Afterwards, we started ducking into the magnificent theatres that are spread out along the street including the Ace Hotel Theatre, the Million Dollar Theatre, the Los Angeles Theatre, The Orpheum, The Palace and The Globe. The theatres offered scheduled programming of film, music and performance art.  There was plenty of seating that allowed guests to kick back and watch a show while admiring the architecture.  Some of the highlights of our visit included the Funky Sole Dance Party at the Globe Theatre, featuring a film montage of James Brown onscreen while guests boogied on the dance floor.  The Drennon Davis show at the Palace Theatre was a big surprise.  This beat box, ventriloquist, singer/songwriting comedian takes you on a journey from his elaborate characters, musical mash-ups as well an original song about his average sized penis.  We enjoyed the music and visuals at the Orpheum Theatre as well as the film programing in the Los Angeles Theatre.

As we walked back towards Grand Central Market, we stopped at some food trucks for Lobster Rolls and Poke Bowls and ate while watching people ride the Ferris Wheel.  Everyone seemed to be in a  festive mood and sharing a table over drinks and eats with strangers was common.  We struck up conversations about the resurgence of Downtown Los Angeles, its gentrification and what it will be like 10 years down the road.

Even as an adult, one can still enjoy the offerings at the Kids Zone, which featured the Star Eco Station Animal Encounters where I got to pet a rescued three year old alligator that was left in a hotel room by its owner.  The zone also featured a jumbo peg light board that you could play with while listening to live music by some remarkable young musicians.

There were plenty of vendors in pop-up booths promoting their brands, giving out samples, signing people up, offering advice or cutting hair while the illuminated retails stores that have sprung up over the last few years were packed with customers. Some other street highlights along the way included the live fortune teller machine and the Two Bit Circus, who engineer imaginative and interactive entertainment. Their Dunk Tank Flambé was the hit of the festival drawing huge crowds during its fire inspired show.

The Night on Broadway festival will continue to grow, and I look forward to coming back next year and being in awe of how fast and how much more Broadway will have changed from the previous year. 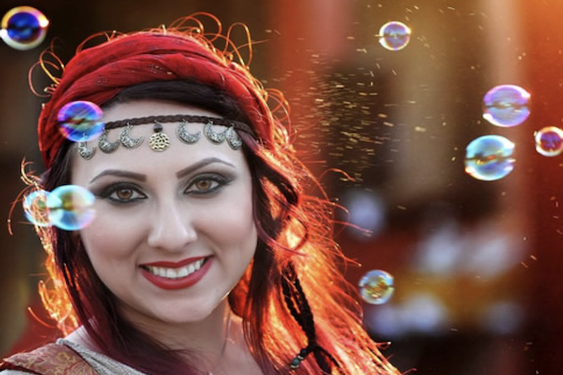 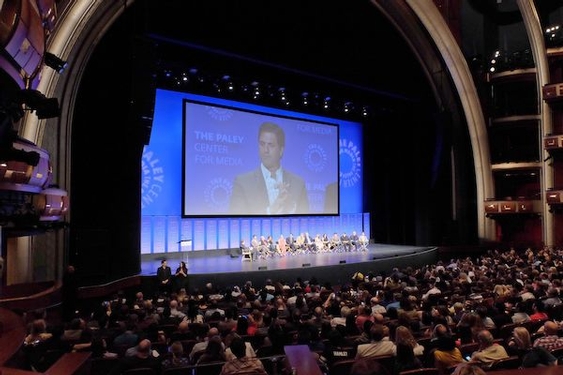 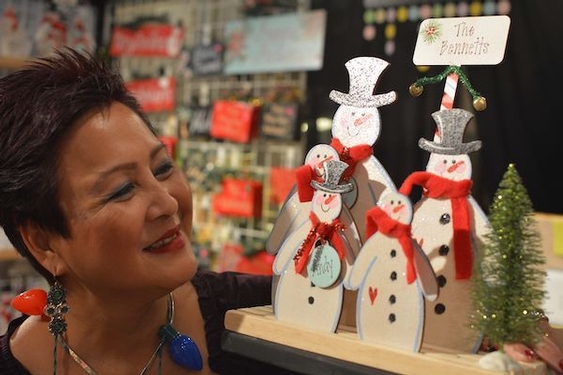 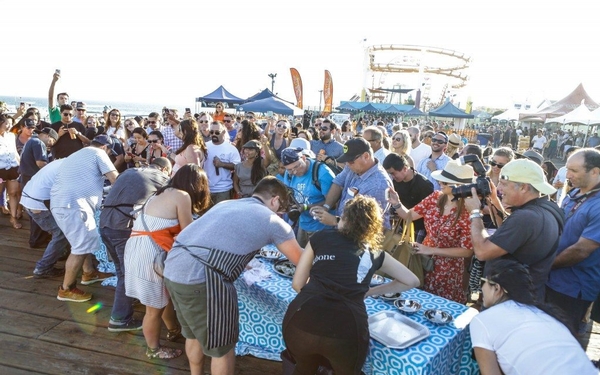 Festivals
Off The Hook Seafood Festival at the Santa Monica Pier on October 6th
2,153 views 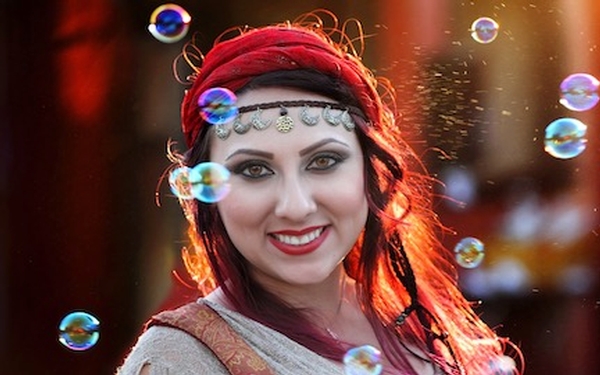 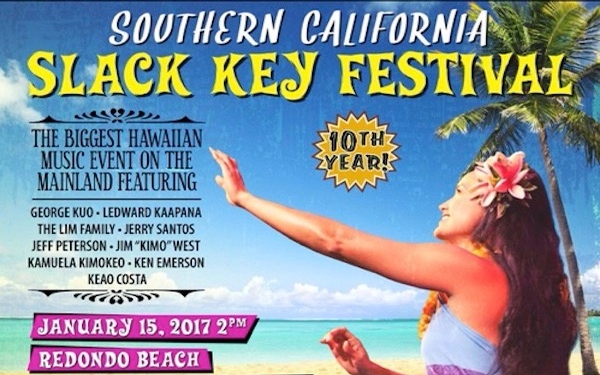 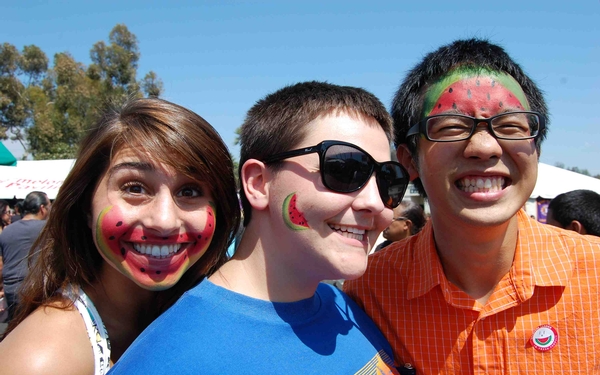 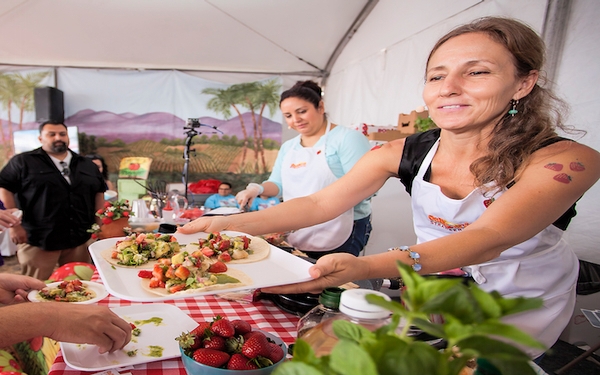 Festivals
California Strawberry Festival Returns on May 21 and 22
2,316 views