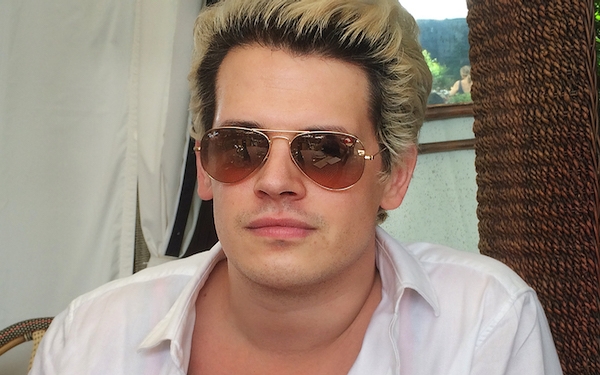 A speech by conservative firebrand and British writer Milo Yiannopoulos was canceled at the University of California, Berkeley on Wednesday amid violent protests that sparked a fire in a campus plaza.

“This is not a proud night for this campus, the home of the free speech movement,” said Dan Mogulof, a Berkeley spokesman. He noted that the vandalism interfered with the ability of the Berkeley College Republicans — who hosted Yiannopoulos — to exercise their First Amendment rights.

Yiannopoulos, 32, writes for Breitbart News — a popular website among the far right — and he is an avowed supporter of President Donald Trump. He’s also a flamboyant provocateur who has been denounced for propagating racism, misogyny and anti-Islam views, but he styles himself a champion of free speech.

This summer, he gained notoriety for encouraging a barrage of harassment against “Ghostbusters” actress Leslie Jones, which prompted Twitter to ban him from the social media platform.

Controversy, unrest and, occasionally, violence has followed his speaking tour at colleges across the U.S., for which Berkeley was to be the final event. Last month, a man was shot outside a University of Washington hall where Yiannopoulos was scheduled to speak.

Wednesday’s decision by Berkeley officials is the second time in two weeks that rowdy protests have forced the cancellation of one of his lectures. UC Davis also canceled one of his speeches last month.

At Berkeley, police clashed with protesters, and much of the university was placed on lockdown. Campus police repeatedly ordered protesters to leave the area, threatening the crowd with arrest. Most refused to leave.

On his Facebook page, Yiannopoulos said that “violent left-wing protesters” had broken into a building’s ground floor, ripped down barricades and thrown rocks.

In characteristic fashion, he pointed to the mayhem on campus to highlight his agenda: “One thing we do know for sure: the Left is absolutely terrified of free speech and will do literally anything to shut it down.”

The protesters seemed as much drawn by Yiannopoulos’ platform as by the broader ascendance of far-right politics.

De’andre Bitter, 72, brought a large sign with LED strips that brightly said “No!”

A retired ship worker originally from Fresno, he stood near the rear of those assembled and said he brought the sign to a slew of recent protests, including a recent women’s march, the airport demonstrations over Trump’s travel restrictions and a protest at UC Davis.

“We go anywhere people are opposing Trump and his fascist regime,” Bitter said. He viewed the vast majority of protesters as peaceful and attributed the violence to a handful of anarchists, who wore mostly black apparel.

“He has no right to speak at Cal or anywhere else,” the leaflet declared.

By 8 p.m., the crowd had halved to about 800 and spilled into the streets, marching down Telegraph Avenue.

A handful of demonstrators smashed dowels into a bank of ATMs. Photos on social media showed shattered windows at businesses.

The sprawling group halted traffic at Telegraph and Durant avenues, where one driver plowed a white sedan into the crowd. One of the demonstrators grabbed on to the car for a block, then rolled off uninjured.

On Tuesday, Yiannopoulos spoke at Cal Poly San Luis Obispo, where the university braced for large protests and stationed more than 100 police officers. About 150 protesters arrived and remained peaceful, and there were no reports of arrests, according to the San Luis Obispo Tribune.

In his remarks there, Yiannopolous extolled Cal Poly for having a student population that was mostly male, railed against abortion and provided instructions on how to apply to his male-only scholarship fund, the “privilege grant,” according to text of his remarks published by Breitbart.

So far, the UC system has resisted calls to cancel Yiannopoulos’ talks. At noon, just hours before Wednesday’s event, Berkeley administrators issued a statement saying they were committed to tolerance as well as free speech.

In the weeks before Yiannopoulos’ planned Berkeley appearance, administrators received hundreds of letters from faculty, students and others demanding they bar him from speaking.

One letter from a dozen faculty members argued that his talk could be canceled on the grounds that his actions — which they called “harassment, slander, defamation and hate speech” — violated UC Berkeley’s code of conduct.