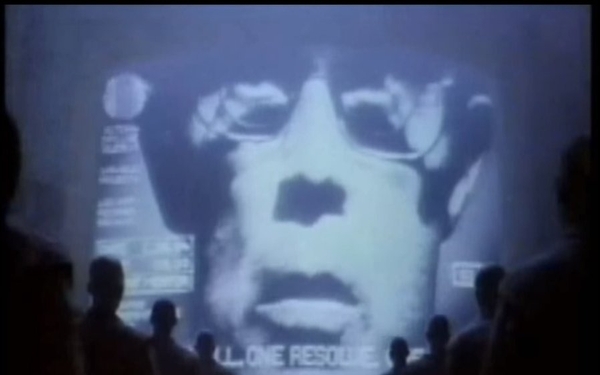 Every year at this time, people talk about the most famous Super Bowl ad of them all, Apple’s 1984 commercial that was based on George Orwell’s grimly predictive novel, also named “1984.”

This spot, introducing the Macintosh personal computer, is legendary because of certain believed truths. It began Apple’s meteoric rise to consumer product superstardom. It kick-started the epic Super Bowl advertising game. It only aired once. It was the best TV ad ever.

In the best-selling biography “Steve Jobs,” about the co-founder of Apple, Walter Isaacson says the 1984 ad, directed by Ridley Scott, “was a sensation … It would eventually be selected by both TV Guide and Advertising Age as the greatest commercial of all time.”

And every year at this time, Chicago lawyer Bill Coulson thinks about what’s wrong with that historical record and the ways he might try to correct it. The thoughts have a little extra urgency this year, with Orwell’s “1984” being widely reread by people who fear the worst about Donald Trump’s presidency.

Coulson’s specialty is intellectual property, and Apple, he has been on a lonely crusade to let people know, violated it by appropriating scenes and themes from Orwell’s novel for its own commercial purposes.

“I see articles from time to time about what a great commercial it was,” Coulson told me this week. “Should a baseball player who took steroids get into the Hall of Fame?

“Everybody thinks it’s a wonderful ad. I suppose it is as a work of art. But a lot of plagiarism is.”

And some of his concerns relate specifically to Orwell’s themes in “Nineteen Eighty-Four,” published in 1949 after the world had witnessed the devastation that a totalitarian state can cause: “To misuse (the novel) to sell widgets is offensive to me,” Coulson says. “That’s what Apple did. And especially a widget that happens to be a high-tech surveillance device.”

Wednesday morning, I had an email from Coulson containing a fresh link, to a Time article on the 25 most influential Super Bowl ads. “Time just did it again,” he wrote. “1984 ad is Super Bowl’s best!?”

Coulson represented Marvin Rosenblum, a Chicago attorney, businessman and film producer who held the TV and movie rights to “1984”; he would make the 1984 version starring Richard Burton and John Hurt.

Coulson first called me after last year’s Super Bowl because for years I’ve been watching and reviewing the ads. This is a game many of us play — an agreement to talk and think about advertising as entertainment for a couple of weeks a year — in large measure because of the impact the Apple ad.

Super Bowl advertising probably would have reached this point anyway, because the game has remained the most watched TV event of the year even as other TV viewing has fractured into tiny shards. But to say that Apple’s 1984 ad kick-started the treatment of Super Bowl advertising as a special category is not unfair.

What is unfair and inaccurate, Coulson believes, is to give Apple and its then advertising agency Chiat\Day so much credit. What people don’t know or understand, he says, is that Apple never paying to air the ad again after the 1984 Super Bowl wasn’t necessarily the company masterstroke that people have perceived it to be, a means of ensuring that interest in it would endure.

Instead, he wrote in a 2009 Dartmouth Law Journal article, “what has never been revealed about this commercial icon, until now, is that the ad was considered a flagrant infringement of copyright and trademark laws.”

Rosenblum watched the Super Bowl that day, became incensed over the ad’s appropriation of an artwork to which he owned the rights, and “promptly wrote Apple’s ad agency to ‘cease and desist’ from further publication of the ad. Apple never again ran the commercial,” Coulson wrote.

Also not true, but a more minor matter, the lawyer says, is that the spot aired just once. “Apple played it once in December 1983, on a TV station in Twin Falls, Idaho, so it would qualify for that year’s industry awards,” Coulson wrote.

Imagine the shock those few Twin Falls viewers had when they saw the ad. It is a depiction of the “two-minute hate,” a portion of life under Big Brother that Orwell uses to dramatize the nightmarish conditions in the totalitarian future society he envisioned. Director Scott shows grayish, drone-like citizens staring numbly at the screen as Big Brother lectures them about “information purification,” “a garden of pure ideology” and having “one resolve.” He tells them, “We shall prevail.”

As these words are spoken, a female athlete in red shorts and a white tank top, a burst of color in this drab world, rushes in clutching a sledgehammer as she is chased by troopers. The image on her T-shirt is an outline of a Macintosh. She hurls her hammer at the auditorium screen, there is a big explosion, and this line appears to viewers: “On January 24th, Apple will introduce the Macintosh. And you’ll see why 1984 won’t be like ‘1984.’”

Whether the cease-and-desist letter was the cause of Apple only running the ad nationally one time is unclear. Lee Clow, the Chiat\Day creative director who guided the ad’s development, said, in a 2014 Bloomberg Businessweek video promising “The Real Story Behind Apple’s Famous ‘1984’ Super Bowl Ad,” that the ad was supposed to continue running but did not because the company’s board thought it “irresponsible” to air a commercial for which no product yet existed.

“It was designed to have a life beyond the Super Bowl,” he says. “That becomes almost part of the legend: ‘Oh, the genius of just running it once on the Super Bowl.’”

A request for comment from TBWA\Chiat\Day, the Chiat\Day successor firm, drew no response at press time.

But Coulson is certain Rosenblum, and Orwell’s heirs and estate in England, would have won should further airings have compelled them to sue. And it gets under his skin that the ad is so widely, unquestioningly celebrated and that Jobs, according to Isaacson, thought he was reclaiming his hacker spirit with this ad meant to symbolize Apple’s disruption of the existing technology world, but that he apparently didn’t recognize the debt he owed to Orwell.

“It’s always amazing to me that these ad agencies are so cavalier with another person’s trademark and copyright,” he says.

“The Apple ad slavishly adopted a thematic scene from the novel: the daily ‘two-minute hate,’” he wrote in the law review article. “There could be no doubt that Apple intended to refer to and trade on the Orwell novel. Apple did not merely choose to illustrate the notion of rebellion against authority. Rather, Apple chose to replicate Orwell’s particular expression of this idea with a direct reference displayed in the text.”

Rosenblum died in 2003, not long after he and Coulson won a settlement from CBS over its early reality show “Big Brother,” which has cameras spy full time on participants. It was during those proceedings, he wrote, that “the history of the rights to Orwell’s novel and its connection with the Apple television commercial, were revealed.”

It’s an important story to share, he says, because the book continues to be so resonant.

“There’s a lot that’s Orwellian about our present political culture,” says Coulson, who is winding down his own practice and gives his age as closer to “codger” than “whippersnapper.” “To me that demonstrates that the novel is timeless and profound as ever.

“‘Unperson’? Did you ever ‘unfriend’ somebody?

“‘Doublethink’ where you hold and express two contradictory thoughts at the same time? We didn’t hear any of that during the campaign, did we?”

“Every time I reread it, I realize what a great novel it is.”

Sales of the book have spiked three times in this century, he says: “One is now. One was in 2013, when the Snowden surveillance scandal came out. And one was in 2000, when the CBS infringing ‘Big Brother’ show came out.