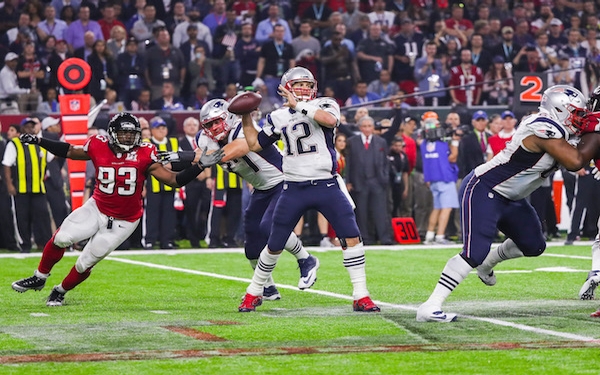 If it didn’t happen in front of billions of eyes around the world, it would be hard to describe how the New England Patriots pulled off what might be the greatest comeback in the annals of professional team sports Sunday night.

Tom Brady’s refusal to give up after the Falcons climbed to a 28-3 lead midway through the third quarter; the Julian Edelman catch that inconceivably didn’t touch the turf at NRG Stadium; the “two successful two-point conversions that capped two fourth-quarter touchdowns, including the game-tying points with 57 seconds left.

And, lastly, the overtime drive in which Brady meticulously marched New England down the field for the game-winning touchdown — a 2-yard run by James White — that gave the Patriots an improbable 34-28 victory in Super Bowl LI, and an unprecedented five Vince Lombardi Trophies for Brady and his coach, Bill Belichick.

“We all brought each other back,” Brady, who was named the game’s MVP, said on the Fox broadcast immediately afterward. “We never felt out of it. It was a tough battle. … We just made a few more plays.”

If there was argument left about who the greatest quarterback and coach are, it seems all but moot now. Brady and Belichick are the greatest and they have the hardware to show for it. The season capped a trying year for the quarterback, who was suspended for the first four games because of his role in “Deflategate” and whose mother dealt with an unspecified illness.

“They just keep competing,” Belichick said of his Patriots. “They just compete for 60 minutes — or longer.”

The Patriots denied Atlanta quarterback Matt Ryan his first title. Ryan was near perfect through the first three quarters. In fact, he had a 158.3 passer rating — the highest possible number. But Atlanta turtled up as New England mounted its rally.

With 3 minutes, 30 seconds left in the fourth quarter and the Patriots trailing, 28-20, Brady and the Patriots had one last chance. They got off to a slow start, but a stupefying catch by Edelman, in which he secured a deflected pass just millimeters before it hit the ground, advanced New England to the Falcons 41.

Atlanta unsuccessfully challenged the ruling on the field.

Brady then completed his next three passes to move the Patriots to the 1-yard line. White took care of the rest, plunging into the end zone, and then Brady flicked a quick screen to receiver Danny Amendola for the game-tying two-point conversion with 57 ticks left on the clock.

The Falcons couldn’t take advantage of the remaining seconds and the game went into overtime — the first in Super Bowl history.

With more than nine minutes left, the Falcons went conservative. They ran on the first two plays of their drive, and on third and long had Ryan drop back to throw. He was sacked by linebacker Dont’a Hightower and fumbled the ball.

The Patriots took advantage and with 6:00 remaining cut the Falcons’ diminishing lead to 28-20 when Brady hooked up with Amendola for a 6-yard touchdown and converted a two-point conversion.

With a pro-Patriots crowd chatting “Defense,” the Falcons marched down the field. Ryan hit a wide-open Devonta Freeman for 39 yards. And then Julio Jones made a sideline catch that will forever be remembered as the second-best catch of this Super Bowl. The Falcons receiver somehow managed to pull in the toss by tipping it to himself and dragging both feet inbounds.

But Jones’ grab was all for naught. Ryan was sacked, backup guard Wes Schweitzer was called for holding and the Falcons were forced to punt with 3:30 left.

The Falcons had first dibs to the start the second half after deferring, but it had been 1 hour and 8 minutes in regular time since their offense was last on the field. They went three-and-out when Patriots cornerback and former Eagle Eric Rowe broke up a third-down pass intended for receiver Taylor Gabriel.

But the Patriots squandered good field possession, and after Chris Hogan and Edelman dropped passes, were forced to punt.

The Falcons capitalized. With Ryan completing 4 of 4 passes for 71 yards, Atlanta went 85 yards on eight plays to reach the end zone for a fourth time. Running back Tevin Coleman caught a 6-yard touchdown pass out of the backfield and the Falcons held a 28-3 lead.

The Patriots found some life on their next series. Buoyed by a successful fourth-down conversion in their own territory, they cut into the lead when White caught a 5-yard touchdown pass from Brady. New England needed 6:25 to score, however, and kicker Stephen Gostkowski missed the extra point.

Trailing, 28-9, with about two minutes left in the third quarter, Belichick gambled with an onsides kick. It failed. But the Falcons didn’t take advantage of good field position and were forced to punt. The Patriots added another field goal early in the fourth quarter to narrow the margin to 28-12.

Defense was the story in the first half, and it was the Falcons that made the momentum-changing plays. Linebacker Deion Jones forced a fumble that led to the Falcons’ first touchdown. Brady was sacked two times and pressured throughout. And Alford stuck the early knife into the Patriots when he picked off Brady and raced 82 yards for a touchdown in the second quarter.

The Patriots quarterback lumbered over to try and tackle the Falcons cornerback, but he was late and sprawled out on the turf as Alford raced downfield untouched. It was the second-longest interception return for a touchdown in Super Bowl history (James Harrison, 100 yards in the Steelers’ Super Bowl XLIII win over the Cardinals).

The Falcons were up, 14-0, before the turnover, and the Patriots had been able to slow the game with a long drive that featured three Atlanta holding penalties. But on yet another third down on the series, Alford jumped Brady’s pass to Amendola. The Patriots had hoped to trim the lead to at least 11 points. Instead, they were now down 21.

Dan Quinn’s defense cofounded the Patriots. A young, athletic secondary used man-to-man defense to often force Brady through his progressions. He completed just 16 of 26 passes in the first half. The Falcons’ run defense also held the Patriots to 35 yards on 14 carries (2.5 avg.).

Ryan, meanwhile, was near perfect. He completed 7 of 8 passes for 115 yards — his last throw coming when he hit rookie tight end Austin Hooper for a 19-yard touchdown pass to give the Falcons a 14-0 lead.

Atlanta’s offense got rolling once it started throwing early on downs to set up the run. After Jones’ forced fumble, Ryan hit Jones for 19 and 23 yards. Freeman took care of the rest, rushing three times for 29 yards — the last a 5-yard touchdown stroll around the corner.

Another Patriots three-and-out gave the Falcons the ball back on their ensuing drive. Ryan went to work immediately hitting Gabriel and Jones for 24 and 18 yards on the first two plays. Three downs later, he found Hooper singled up against flailing safety Patrick Chung.

The Patriots drove down the field before the break, but had to settle for a field goal and a 21-3 deficit.