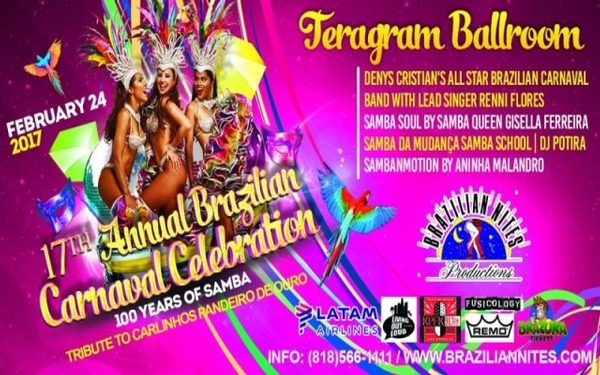 Brazilian Nites Productions is back for another year of Carnaval revelry and spectacle with the 17th Annual Brazilian Carnaval celebrating "100 Years of Samba" – A Tribute to Carlinhos Pandeiro de Ouro, at the Teragram Ballroom on Friday, February 24th at 8:00 p.m.

Brazilian Nites prides itself on curating an authentic Carnaval experience for Angelenos with the best music, non-stop dancing, Samba drummers, beads, masks, authentic Brazilian drinks, and of course, the titillating and elaborately costumed elite Samba dancers. Attendees will also get the chance to win a trip to Brazil. LATAM Airlines is giving away a ticket to Rio de Janeiro, Brazil. All-ages are welcome. Costumes encouraged.

The largest Carnaval celebration on the west coast features the LA All Star Brazilian Carnaval band directed by Denys Cristian & featuring lead singer Renni Flores, Samba Soul Dancers, Samba Da Mudança Samba School, and DJ Potira.  The night will also include a performance by SambaNMotion led by Aninha Malandro – daughter of the legendary Brazilian musician Carlinhos Pandeiro de Ouro – for whom the night is a tribute.

A native of Rio de Janeiro, Carlinhos Pandeiro de Ouro is a famed pandeiro player, percussionist and 2011 NEA National Heritage Fellow. One drum that can perform all the rhythms of the samba is Brazil’s national instrument, the pandeiro. (The pandeiro is a tunable tambourine, played with a different technique than in North American music.). Carlinhos has had a wide-ranging career, spanning over 50 years, as a percussionist, appearing in Brazilian films, on Brazilian television, and performing around the world with Herbie Mann, Sergio Mendes, Sadao Watanabe, Ed Thigpen, Toots Thielemans, Martinho da Vila, Beth Carvalho, Maria Bethania, and many more. Today, Carlinhos lives in Los Angeles, performing nationally and teaching locally at the 18th Street Arts Center in Santa Monica. He is a recipient of awards from the Durfee Foundation, the Alliance for California Traditional Arts, and the Department of Cultural Affairs, Los Angeles.

This year’s Carnaval is also celebrates 100 years of Samba. Samba is a Brazilian musical genre and dance style, with its roots in Africa via the West African slave trade and African religious traditions, particularly of Angola and the Congo, through the samba de roda genre of the northeastern state of Bahia, from which it derived. It is recognized around the world as a symbol of Brazil and the Brazilian Carnaval. The samba is most frequently identified as a musical expression of urban Rio de Janeiro, where it was born and developed between the end of the 19th century and the first years of the 20th century. In 1917, "Pelo Telefone" ("Through the Telephone") was recorded, and it is considered the first true samba. The song was claimed to be authored by Ernesto dos Santos, best known as Donga (musician), with co-composition attributed to Mauro de Almeida, a well-known Carnaval columnist. "Pelo Telefone" was the first composition to achieve great success with the style of samba and to contribute to the dissemination and popularization of the genre. From that moment on, samba started to spread across the country, initially associated with Carnaval and then developing its own place in the music market.

Tickets for the 17th Annual Brazilian Carnaval are $35 General Admission. For information and tickets (818) 566-1111 or visit www.BrazilianNites.com.

Brazilian Nites Productions has been successfully organizing events since its inception, bringing people of different ages and nationalities together to experience the allure and character of Brazilian culture. The company produces several shows each year, including two annual events: the Brazilian Summer Festival and L.A.’s largest Brazilian Carnaval on the West Coast in February.