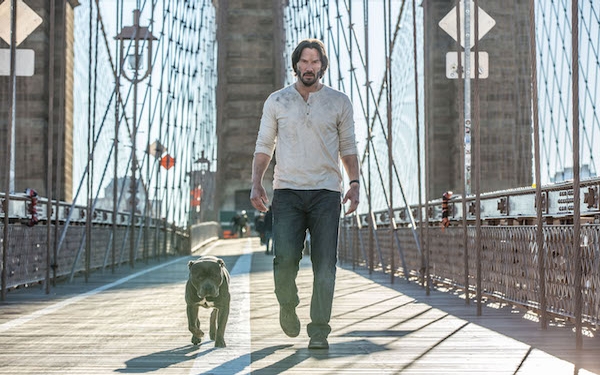 If you didn’t catch 2014’s surprise action hit “John Wick,” launching Keanu Reeves right into a Liam Neeson-style career rebirth, it’s OK. Peter Stormare is here to explain “John Wick” to you at the beginning of “John Wick: Chapter 2.” Playing a Russian gangster, he serves as a connection to the prior film, wherein retired assassin Wick killed everyone in sight while avenging his dog. In fairness, the dog was really cute. Stormare serves as an audience proxy, a fan of Wick. “He killed three men in a bar with pencil!” Stormare exclaims. And in the way that every character recognizes him on sight, uttering “John Wick…,” it’s like they all saw the first movie too.

Writer Derek Kolstad and director Chad Stahelski are back for the sequel alongside Reeves, brewing up more of that uniquely Wickian magic. The screenplay is once again taciturn, nearly wordless; Wick speaks infrequently, in monosyllables (perfect for Reeves’ stoner intonation), and new co-star Ruby Rose doesn’t utter a word. But the film is noisy, speaking in the whine of motorcycles, rumbling engines, gunshots, knife swipes and text message alerts announcing a bounty on John Wick’s head.

Like its predecessor, “John Wick: Chapter 2” is a symphony of violence, a ballet even, and the visuals are abstracted to the surreal. The camera doesn’t cut often, eschewing the rapid fire editing typical for this genre. In long takes, it methodically follows Wick as he works, smashing and stabbing and shooting. He is talented, but it is work he detests; he’s compelled by his reputation and his skillset into action. Reeves plays the autopilot assassin with a haunted despondency. His skills are remarkable (you gotta see him with a pencil), but he limps and heaves and bleeds. His hurt, inside and out, is all over his face.

He’s a simple man, with a simple life. All he needs are his house, car and dog. Mess with that, mess with him. In the first film, he avenged his dog; now, it’s his house, filled with all the memories of his late wife. It’s a fascinating role for Reeves’ resurgence, and Stahleski and Kolstad play perfectly to his strengths: his quiet, Zen-like power, his just-deadpan-enough line readings that have inspired unintentional giggles throughout his career.

Where “Chapter 2” stumbles is in its plotting. The beauty of the first film was in the simplicity of story married to Reeves’ quiet persona and performance. Avenge the dog — that’s it. This film involves sibling rivalries, long cons, pawns, bounties and double crosses. It ends, then ends, and ends again, extending the exercise far beyond its welcome. It should have taken a note from its star and kept it simple, stupid.

Rated R for strong violence throughout, some language and brief nudity.