Unfiltered James Baldwin spells out what ails us, director of ‘I Am Not Your Negro’ says 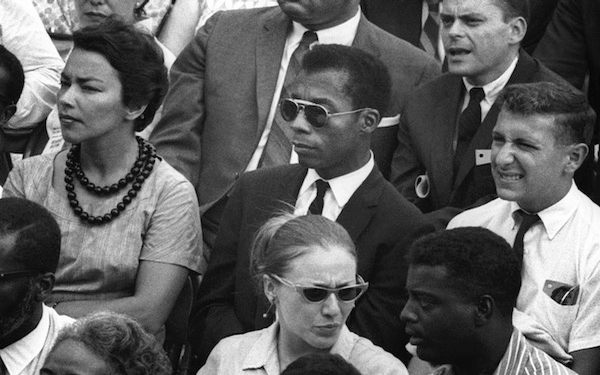 James Baldwin got to the root of America’s persistent, racially tense sociopolitical climate nearly 55 years ago. In an interview on Henry Morgenthau III’s “The Negro and the American Promise,” alongside the Rev. Martin Luther King Jr. and Malcolm X, he laid at the feet of white America the divisive language it once created to dehumanize black people, which set off centuries of division.

“What white people have to do is try and find out in their own hearts why it was necessary to have a nigger in the first place, because I’m not a nigger,” he said. “I’m a man, but if you think I’m a nigger, it means you need it … If I’m not a nigger and you invented him — you, the white people, invented him — then you’ve got to find out why. And the future of the country depends on that, whether or not it’s able to ask that question.”

That was in 1963 when, with cigarette smoke wafting around his head, Baldwin challenged, on public television, America to reckon with its responsibility for some of the problems that plagued the country. As the new documentary “I Am Not Your Negro” argues, if America had listened, perhaps our current uncertain political atmosphere might never have arrived. But it’s here, and still Baldwin has the answer.

That’s the sentiment of documentarian Raoul Peck’s film. And quite like Baldwin, the film is unadulterated, uncompromising and unapologetic.

“It’s practically saying to this country that the ‘American Dream’ doesn’t exist because we built it on the genocide of Native Americans and blacks,” Peck said. “It’s saying if you don’t fix your problem that you have — not me as a black person — my presence will wrack your dreams. Each minute of this film is a bomb. There is nothing innocent, no respite. Bomb. Bomb. Bomb. Bomb.”

Peck first came to know of Baldwin and his incisive words through a couple of black gay friends with whom he lived in the same college dorm in Berlin. In “fierce discussion” with the two Americans about race in the United States, Peck, who was born in Haiti and raised in France, wanted them to be aware of a permanent anger they seemed to have about being black in America.

But Peck realized that, coming from a different background, one where he “learned very early on that I am not to be defined and nobody had the right to tell me (about me),” his experience was fundamentally different. “I was privileged to escape that kind of scrutiny,” he said.

His two friends weren’t as lucky. They gifted him Baldwin’s “The Fire Next Time,” and he was forever changed.

“Since that first contact with Baldwin, I never left him,” he said. “I read everything. He was a constant reminder for me, a constant mentor, a constant companion.”

When Peck began making films — after being a New York City taxi driver and working as a journalist and photographer, and while he was Haiti’s minister of culture — he knew that “one day I would tackle Baldwin,” especially since he starts every screenplay he writes with a Baldwin quote to help “sustain the whole writing process.” He set out to do just that nearly 10 years ago.

In need of permission from the Baldwin estate — the writer died in 1987 — Peck wrote them a letter despite everyone telling him they were notorious for refusing or ignoring requests. “I have nothing to lose,” he thought.

He received a written response within three days and an invitation to meet with Baldwin’s sister Gloria Karefa-Smart in Washington, D.C. By the end of their meeting, she, a fan of Peck’s 2000 film “Lumumba,” had granted him unprecedented access to the entire estate.

“She chose me, much more than me choosing Baldwin,” he said.

Over the next four years, he ruffled through Baldwin’s many works, published and unpublished. In that time, he had written a number of scripts, for a narrative feature and a mixed narrative-documentary flick, but “all that was not satisfying for me,” he said.

“Deep down what I wanted was how to do the ultimate Baldwin (film), the film that would be bold and nobody could shake up, that would stay forever and make everybody go back to Baldwin and the books,” he said.

It was necessary for him to at least try to have the same impact Baldwin himself had on people and society with this film. But “to be totally Baldwin, I knew I had to set myself back and leave the stage for him, his words.”

The idea for “I Am Not Your Negro” would come when Karefa-Smart was packing up the estate to send to the New York Public Library. She came across a 30-page collection of notes, which she sent to Peck believing he’d know what to do with them. The notes were of Baldwin’s unfinished book, “Remember This House,” and provided “the open door” Peck was longing for.

“Remember This House,” the foundation of the film, was Baldwin’s effort to tell the story of race in America through the assassinations of Malcolm X, King and Medgar Evers. The filmmaker took the words from those pages and crafted a narrative, voiced by Samuel L. Jackson, that Peck hopes will endure and remain as relevant as Baldwin himself. And in contrast to how most modern documentaries are made, the now Oscar-nominated “I Am Not Your Negro” has no talking heads. The only words are Baldwin’s.

“I made sure every single word was pure Baldwin,” he said. “It was not about how creative I am. It was about how do I make sure it hits the people frontally, without any filter.”

That aspect is what separates this documentary from any other done on Baldwin, said Charles Reese, an actor and artist known for his critically acclaimed off-Broadway performance in “James Baldwin: A Soul on Fire.” He’s since dedicated his life to discussing and keeping Baldwin’s memory alive.

“I had to stand still and catch myself,” he said of his first time watching the movie. (He’s now seen it four times.) “I had to take stock. This piece really gives you Baldwin in a way we’ve never seen Baldwin (presented) before.”

Such a presentation is necessary, he said, considering the divisions in this country that have been exacerbated with the rise of the Black Lives Matter movement and the recent election of Donald Trump as president. Reese believes “Baldwin’s work will be the work we’re going to have to utilize to get through this next phase.”

Reese agreed with Peck’s assessment, that the film is a bomb. “It is a bomb that is a balm, and a tool for healing everyone,” he said.

But everyone, particularly white America, must truly bring themselves to and into the film for it to have the desired effect. They must be willing to confront themselves, Peck said.