Despite unprecedented opposition, Betsy DeVos squeaks through to become secretary of education 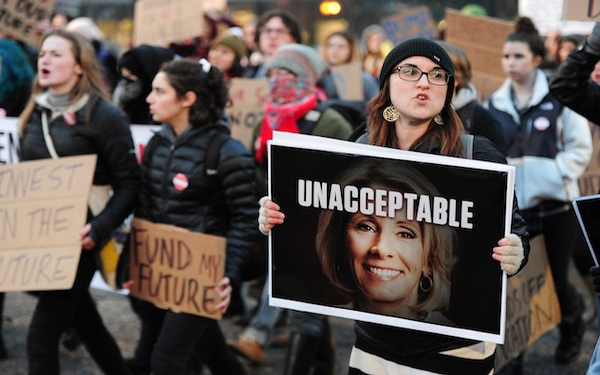 But the effort was not enough to prevent Betsy DeVos from becoming U.S. secretary of education.

DeVos squeaked through the confirmation process on Tuesday with the tie-breaking vote of Vice President Mike Pence and the participation of Sen. Jeff Sessions (R-Ala.), whose own confirmation vote for attorney general was scheduled after DeVos’ to ensure his vote would be available.

It was the first time a vice president’s tie-breaking vote was needed to confirm a presidential Cabinet appointment.

DeVos, a Michigan-based Republican activist, former state party chairwoman and fundraiser, spent her career campaigning for school vouchers, which would send tax money to families to help them pay for private and often religious schools. As the wife of the billionaire heir to the Amway fortune, she contributed millions of dollars to candidates who supported vouchers, including several of the senators expected to vote to confirm her.

She would be the first secretary of education since the department was created in 1979 to have never attended public school or to have sent her children to one, the Education Week Research Center found.

Her road to confirmation has been among the bumpiest of any of Trump’s Cabinet nominees. At her confirmation hearing in January, DeVos seemed unfamiliar with some of the basics of education policy. She was unable to distinguish between “proficiency” and “growth,” for example, concepts that are crucial to a major education debate about the fairest way to measure student learning.

Her inability to answer that question became part of a “Saturday Night Live” skit.

DeVos also appeared to not know that the Individuals with Disabilities Education Act is a federal law that puts all states on the hook for teaching special-needs students — a subject of intense interest to several senators as well as hundreds of thousands of parents with disabled children.

Beyond those fumbles, several other moments from her hearing went viral outside the bubble of government and education experts. In response to a question about whether guns belonged in schools, DeVos said she would leave that decision to “locales and states” and joked that perhaps a school in Wapiti., Wyo., which has a grizzly bear fence, would use a gun to ward off the animals. That joke launched Internet memes, as well as a segment on “The Daily Show.”

Historically, nominees for secretary of education have sailed through their confirmation with bipartisan support.

“The custom has been that the president is entitled to his own advisers, so it’s rare that there’s a real fight,” said Jack Jennings, a lawyer who served as an education expert for House Democrats for decades. But following DeVos’ confirmation hearing, teachers, unions, activists and at least one fellow billionaire flooded Congress with opposition — some 1.5 million calls a day to Senate offices.

Those calls were among the factors that made Republican Sens. Lisa Murkowski of Alaska and Susan Collins of Maine decide last week that they would vote against DeVos. Murkowski said she made her decision after hearing from “thousands, truly thousands, of Alaskans.”

During the George W. Bush and Obama presidencies, a group of Republicans and Democrats largely agreed on the expansion of charter schools and school accountability.

That development created a rift in the Democratic Party largely between education reform advocates and those who sided with teacher unions. In 2015, the bipartisan coalition was strong enough for Congress to pass the Every Student Succeeds Act, the successor to the Bush administration’s much-maligned No Child Left Behind Act.

DeVos’ nomination seems to have ended that bipartisan moment and split charter supporters. DeVos was involved in the proliferation of charter schools in Michigan, but in that state, even some charter supporters have criticized their lax oversight. (At her hearing, DeVos said she supported a bill that increased accountability for Michigan charters.)

The National Association for Public Charter Schools released a statement supporting DeVos. But Eli Broad, a billionaire philanthropist who has tried to increase the number of charter schools in Los Angeles and in other cities, last week called DeVos “unprepared and unqualified” for the job.

It is unclear what policies DeVos would push once in office. During the campaign, Trump backed a plan to expand school vouchers dramatically, but throughout the confirmation process, DeVos told senators that she would not impose a voucher plan on states that didn’t want them.

Any proposal to greatly increase vouchers would run up against Republican reluctance to raise federal spending. Paying for a massive voucher expansion by cutting other education programs would run into intense political opposition.

But if early hires are any sign, the Trump administration is intent on rolling back much of what the Obama administration did over the last eight years.

Obama gave the Education Department an activist role by using executive orders and federal competitions to prod states to adopt certain school policies and to beef up civil rights enforcement. The department’s Office of Civil Rights also increased investigations into sexual assaults at colleges and issued guidance protecting the rights of transgender students.

In the final hours before the confirmation vote, Democrats took over the Senate floor for 24 hours to protest DeVos.

“She is unfamiliar with even basic education issues,” said Sen. Mark R. Warner (D-Va.), who voted for several other Trump nominees.

Sen. Gary Peters, from DeVos’ home state of Michigan, said the nominee had garnered a nickname, “the four-star general of the pro-voucher movement,” and “remains shockingly unfamiliar with federal law.”

He’s glad that DeVos is not an “education bureaucrat” who “knows all the acronyms,” Cornyn said.

(Lisa Mascaro in Washington contributed to this report.)